The Sydney Test of January 2008 was one of the most controversial of all time.

As part of our pre-series flashbacks ahead of the first Test between India and Australia at Adelaide Oval, we are recapping past moments in the history of India vs Australia cricket.

Here’s a look back at the infamous Monkeygate controversy that nearly ruined India’s tour of Australia in 2007-08.

When the Australians lost to India in the semi-final of the inaugural ICC World Twenty 20 in 2007, a war of words was witnessed on the ground.

Harbhajan Singh recounted: They are a very good cricket side, but that does not mean that they can do whatever they want to do

Andrew Symonds was less than impressed by the excessive adulation shown by the Indian fans when the side returned from the T20 triumph. We have had a very successful side and watching how we celebrate and how they celebrate, I think we have been pretty humble in the way we have gone about it.

Symonds was less than impressed by the excessive adulation shown by the Indian fans when the side returned from the T20 triumph. We have had a very successful side and watching how we celebrate and how they celebrate, I think we have been pretty humble in the way we have gone about it.

When Australia toured India in October 2007, Symonds, the only non-white player in the squad, was subjected to repeated monkey-chants from the crowd. In Mumbai, four men were arrested for taunting Symonds and making monkey gestures.

It was also claimed that Harbhajan had called Symonds monkey during the series, but the matter was resolved with a promise that it would not be repeated. Symonds had supposedly explained to the off-spinner why the term was objectionable to him.

Before the 2007-08 tour got under way, the two teams made a deal with the appointed match referees to play in the right spirit. The nature of this deal has been disputed. While the Australians claim that it stipulated against racial comments and the use of the word monkey , the Indian officials insist that it also put an embargo upon abusive exchanges.

The two teams met in Sydney for what turned out to be the bitterest encounter of all. The tension in the series had risen to a crescendo and Steve Bucknor was there diligently providing his own brand of accompaniment.

When Symonds batted in the first innings, he was wrongly given not out three times, twice by Bucknor. He went on to score an unbeaten 162. The match witnessed many more controversial decisions.

On the third afternoon Harbhajan, batting with Sachin Tendulkar, edged a Brett Lee snorter over the slips for four. Harbhajan patted Lee s backside with his bat saying, Hard luck. Symonds found this unacceptable and decided to intervene. The stump microphone recorded his voice saying, We don t need it, do it to your teammates.

During the exchanges the Australian thought Harbhajan had used the word monkey yet again. Symonds’ voice once again rings through on the stump microphone recording, You called me monkey again. You don t know what you ve said. He was then joined by Matthew Hayden whose voice can be made out, Twice, you ve got a witness now, champ.

When Harbhajan protested that Symonds started it, Hayden retorted, Doesn t matter, mate. You know this is a s**t word racial vilification.

Soon Ricky Ponting got into the thick of things as well saying, You have had it, mate!

Michael Clarke was next to enter the fracas, approaching umpire Mark Benson and reporting, It s not the first time. He did it in India and got into strife. That s the second time he s done it.

Ponting now asked Benson to report it to Bucknor straight away.

The umpires reported the incident to match referee Mike Procter, charging Harbhajan with breaching the ICC Code of Conduct by using language that offends, insults, humiliates, intimidates, threatens, disparages or vilifies another person on the basis of that person s race, religion, gender, colour, descent or national or ethnic origin.

At the end of the third day, Indian captain Anil Kumble requested Ponting not to press charges, offering to apologise for the entire episode. However, the plea fell on deaf ears.

At the end of the Test match, won by Australia under severely controversial circumstances, Procter listened to the testimony of Hayden, Symonds, Ponting, Adam Gilchrist, Tendulkar and Harbhajan, and stated that the Indian spinner would be banned for three Test matches.

Additionally, his final report included the following words that the Indians found extremely objectionable, I believe one group is telling the truth.

This verdict was severely condemned in India. Sunil Gavaskar made the national sentiment clear in his Hindustan Times column: Millions of Indians want to know if it was a white man taking the white man s word against that of the brown man . This is what has incensed the millions of Indians who are flabbergasted that the word of one of the greatest players in the history of the game, Sachin Tendulkar, was not accepted. In effect, Tendulkar has been branded a liar by the match referee.

Following the decision, the Indian team announced that they would discontinue the tour pending the outcome of the appeal against the ban. They stayed back in Sydney while The Board of Control for Cricket in India (BCCI) stated that the unfair decision would be challenged.

The ICC reacted with uncharacteristic promptness by appointing New Zealand High Court judge John Hansen to oversee the appeal immediately after the Test series. With this assurance, the tour was continued.

Harbhajan did not play in the third Test at Perth as India opted to field only one spinner on a quick wicket. India won the match comfortably. For the final Test at Adelaide, Harbhajan was recalled even as his appeal remained pending.

On January 28, 2008, Judge Hansen concluded that there was insufficient evidence for the racism charge against Harbhajan to be proved.

Symonds was unable to say conclusively whether Harbhajan had used the word monkey or a similar sounding Hindi slang. Clarke s account also did not tally with the rest of the Australians.

Symonds admitted that he had provoked the incident by reacting angrily to Harbhajan s act of patting Lee. When Symonds defended himself saying that a Test match was not a place to be friendly, Judge Hansen remarked, If that is his view I hope it is not one shared by all international cricketers. It would be a sad day for cricket if it is.

Hansen also trusted the testimony of Tendulkar, who, according to various camera angles, seemed to be the player closest to the conversation. Lastly, the judge made it clear that he was not bowing to pressure exerted on him by any cricket board. Harbhajan s three-Test ban was overturned. He was fined 50% of his match fee for using abusive language.

The Australians managed to get a few supporting voices at home, but most of the barrels of criticism around the world were turned against them.

Former Pakistan fast bowler Wasim Akram blasted the hypocritical Australians for reporting Harbhajan in spite of their own on field image, calling them the worst sledgers in the world and cry-babies . New Zealand cricketer Dipak Patel, of Indian origin, said that he had been called a lot worse than a monkey .

English journalist Simon Barnes, writing for The Australian, alleged that Australia has long promoted mental disintegration; as a result, we are facing the disintegration of the game of cricket.

Even Jeff Thomson, the former Australian fast bowler not really known for his exemplary on-field behaviour, said: The Aussies act like morons and bullies and they can t cop criticism from someone like myself. I think it was appalling that none of the Australians went over and shook Anil Kumble s hand at the end of the Sydney Test. They just played up and carried on like idiots like they normally do.

Symonds went on record saying that the verdict of Judge Hansen had driven him into a state of disillusion and depression, leading him to take refuge in alcohol.

However, the auction rooms of the Indian Premier League proved to be the binding agent as both Harbhajan and Symonds landed up in the dressing room of the Mumbai Indians. Since then, the spat seems to have been forgotten and both claim to be the best of buddies.

According to Symonds: Bhajji and I have talked about what had happened between us. We have sat down and worked out things. We get along well now. We party, socialise, we get sloshed. 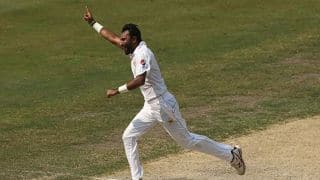