Richard Ellison: The swing bowler who was hailed as the next Ian Botham after the Ashes of 1985

Richard Ellison: The swing bowler who was hailed as the next Ian Botham after the Ashes of 1985

Richard Ellison, born September 21, 1959, was England’s Ashes hero in 1985 when, in the penultimate and last Tests, he swung the series in his side’s favour with his medium-fast bowling. Karthik Parimal looks back at the short career of this Kent cricketer. Richard Ellison, born September 21, 1959, was England’s Ashes hero in 1985 when, in the penultimate and last Tests, he swung the series in his side’s favour with his medium-fast bowling. Karthik Parimal looks back at the short career of this Kent cricketer.

Examples of players being earmarked for their performance in just one match, or in one series, are in abundance. If that epic is scripted at the Holy Grail, they tend to linger in public memory longer than usual. Richard Mark Ellison was one such player who, after a tremendous 1985 Ashes series, was hailed as the next Ian Botham. With a curly mop of hair and distinctive moustache, his bowling propelled him to a level of adoration reserved only for the most elite in England at the time. It hence comes as a surprise that he walked away with just 11 Test caps to his name.

Ellison was introduced to the sport via his family. Apparently, his great-grandfather had played against the Grace brothers and his grandfather captained the Derbyshire Second XI, that at the age of 60. His father, too, was a cricket enthusiast but passed away when Ellison was only eight. Nonetheless, he witnessed his son’s prowess when, at the age of seven, Ellison took eight wickets for three runs for Friars Preparatory School. After moving to Tonbridge School, his interest in other sports grew, but when he made the First XI of the cricket team, the rest were put on a backburner. It was here he met Alan Dixon, the coach Ellison credits for his rise as a swing bowler.

With Dixon’s recommendation, Ellison made his debut for Kent in 1981. In three years, his fast-medium bowling troubled enough batsmen at the domestic level to earn him a call-up for the national side. The English, staring at a whitewash against West Indies, were set for inevitable changes and, in the August of 1984 for the last Test at The Oval, Ellison made his debut. He took five wickets and with runs in the lower middle-order, looked a replica of Botham on the field. That performance helped retain his spot for the one-off Test against Sri Lanka during which, despite taking just one wicket with the ball, he made a brisk 41. Little did one expect it to be his highest Test score. Later in 1984, Ellison was on board to tour the sub-continent, since Botham had been rested for the English winter. Having played three of the five Tests there, he took four for 66 at Delhi to help restrict India to a moderate first innings total — a game England eventually won by eight wickets. In the rest of his outings, he failed to pocket a single scalp. A few months later, when it was Australia’s turn to tour for the Ashes, he wasn’t the selectors’ first choice. With the series tied at 1-1, he was roped in for the fifth fixture at Edgbaston, but Ellison wasn’t a certainty even then, owing to cold. Nevertheless, he decided to carry on, despite being half-fit, for he was keen to make the best of what could possibly have been his only chance. 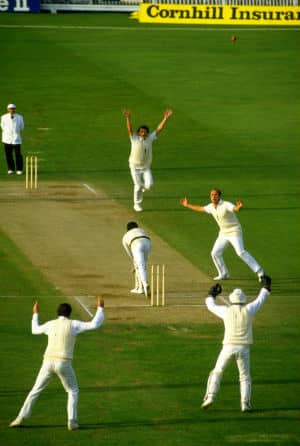 English skipper David Gower won the toss and put Australia in to bat, a decision that copped criticism from the press when they reached 335. But Ellison’s six for 77 managed to hog a piece of the limelight. It was exactly the kind of spell that bolstered the hosts’ morale. Then, Gower thwacked 215, and centuries from Tim Robinson and Mike Gatting put Australia’s innings into perspective. England declared at 595 for five. When Australia’s second innings commenced, commotion ensued. Ellison took four wickets for just one run towards the end of the fourth day to leave their innings in complete disarray, thereby grabbing a ten-wicket haul. That performance was duly noted by Wisden as follows: “The Kent swing bowler fought off the debilitating effects of a heavy cold to capture ten for 79 in the match, be named as Man of the Match, and announce his coming-of-age as a Test bowler.”

At 36 for five, Wayne Phillips set out to repair the damage, but a freak dismissal ensured that defeat, by a margin of an innings and 118 runs, was conceded. In the sixth Test, played at The Oval, he bagged match figures of seven for 81 as England, yet again, won by an innings to reclaim the urn. For the next two decades, before Michael Vaughan’s troop came along, it would be England’s last home Ashes series victory. With that, many, like Wisden, believed, Ellison turned a corner, but sadly that wasn’t to be.

Even as Ellison’s stature as a bowler grew post that Ashes, his batting form and physical fitness — a back problem — took a dip. After playing only four more times — three Tests against the West Indies and one against India — Ellison disappeared from the international stage. Back in the domestic arena, he claimed three for 27 and scored 29 in the 1986 Benson & Hedges Cup finals for Kent against Middlesex, but the match was lost by two runs. In 1988, he took 71 First-Class wickets. However, he was off the selectors’ charts by now.

After an incredible start to his career, little did one expect Ellison to feature in just 11 Tests and 35 wickets to his name. Also, in due course of time it became evident that he wasn’t as efficient when the sky was clear and the surface very flat. His 475 First-Class scalps made for a better reading but, in 1992, at the age of just 32, he called it quits from all forms of cricket, perhaps realising the fact that the chances of him donning the English flannels again were minimal. A rebel tour to South Africa was his last big outing, albeit it being unofficial.

Post cricket, Ellison took up the role of a Physical Education (PE) teacher at Millfield School in Somerset, simultaneously coaching their first XI.

CLT20 2013: Shikhar Dhawan unperturbed ahead of main draw despite loss against Otago Volts