England suffered one of their worst humiliations on February 5, 1984, when they crashed to defeat in three days after being shot out for 82 and 93 against New Zealand. Abhishek Mukherjee looks at the hero of the epic win Richard Hadlee.

No one thought New Zealand stood a chance in their upcoming series against England. After all, they had never beaten England in a Test. They had somehow managed to evade defeat in the first Test of the series at Wellington after conceding a 244-run lead, but when they took field in the second Test at Christchurch, England looked firm favourites on a suspect pitch.

Graham Dilley was ruled out of the match at the last moment. There were other injuries in the camp as well, and Tony Pigott, a rather pedestrian Sussex seamer playing club cricket in Wellington, was called up as a last-minute replacement for the sole reason that he was present in New Zealand. To complicate things further, Pigott was supposed to be married on February 6 three days after the start of the Test! As things turned out, Pigott made his Test debut and had to postpone his wedding as a result. It was the only Test he played.

Geoff Howarth won the toss and decided to bat. Bob Willis bowled with conviction in his first spell, but at the other end, Ian Botham looked completely lost as he bowled a wayward line. Willis brought on a tired-looking Pigott, who got his first Test wicket almost immediately. Norman Cowans came on to take two quick wickets, and at 53 for 3 England seemed to be the better side.

Two more wickets fell, and out came Richard Hadlee with the score on 137 for 5. He showed exactly why he was considered one of the finest all-rounders to have played the sport. Jeremy Coney hung around, as Hadlee ferociously launched into the clueless English attack. Botham bowled too short, Pigott too full, and there was no venom in the England attack. Willis was reduced to cut down his run-up and pace to restrict Hadlee s ruthless massacre.

Hadlee added 66 with Coney, and then 78 more with Ian Smith. He was unfortunate to be dismissed on 99, but the 81-ball annihilation (that included 18 fours) had turned the fortune in New Zealand s favour. Willis ran through the tail, and New Zealand managed to reach 307. There were 27 extras and 42 fours in the New Zealand innings all in a single day.

There was still some time left, and Howarth quickly brought on the left-arm spinner Stephen Boock just before stumps. Boock ran through Graeme Fowler s defense immediately, and the first day s play ended with the wicket at 7 for 1.

It rained on the second day, and play did not commence before tea. Bowling under overcast conditions on a damp pitch, Hadlee wrecked the England top order with a destructive spell of 3 for 2; he was virtually unplayable. Chris Tavar nicked one after a typical 35-ball 3, David Gower shouldered one aimed for the wickets that crashed on his pads, and Derek Randall edged one first ball. 10 for 4. New Zealand had smelt blood.

Ewen Chatfield supported Hadlee with relentless accuracy, and Lance Cairns joined the party as well: England ended the day with 53 for 7, with only Allan Lamb and Botham reaching double figures. Their lowest score against New Zealand 64 at Wellington in 1977-78 suddenly looked under threat, but with Mike Gatting around, they possibly had a minuscule chance of avoiding the follow-on.

On the third morning, Pigott was trapped leg-before by a slower delivery from the crafty Cairns. Chatfield took the remaining two wickets. Gatting top-scored with an unbeaten 19, and England were bowled out for 82 in 50.2 overs, 40 minutes before lunch. Hadlee finished with figures of 17-9-16-3; Cairns and Chatfield also took 3 wickets apiece, and England were asked to bat again.

Tavar and Fowler managed to last till lunch against a hostile Hadlee, who gave nothing away, and continued the clinical destruction of the first innings. He pitched one on the middle stump that moved away late, and took Tavar s edge. He had managed a 36-ball 6, amounting to 9 off 71 balls in the match a typical Tavar performance.

He moved one away from Gower soon, who prodded at it, and was caught by Cairns in the slips. The late movement produced from close to the stumps on a pitch that was cracking up was turning out to be more and more difficult for the English batsmen. The silk-smooth run-up, the effortless release, the immaculate line and length, the late movement were a treat for the sore eyes of the New Zealand cricket-lovers.

At the other end, Boock removed Fowler. Gatting, tied down by some quality seam bowling, hit one off Boock straight to Hadlee for a blob; and Botham fell the very next ball. Chatfield removed Lamb at the other end, and the score read 33 for 6. The number 64 appeared in the minds of the English for the second time in the day.

Randall and Bob Taylor took them past the 64-mark, and added 39, their highest partnership for the Test. It was then that Taylor pushed one to Bruce Edgar at the cover, and Randall refused to run; Edgar threw the ball to Smith, and Taylor was found short of the crease.

Hadlee came to the forefront once again. He bowled a short one to Randall, who attempted to cut it, but the top edge flew to Cairns, who caught it in the second attempt. He had Willis nicking one to Howarth in the slips, and then had Cowans caught behind, going for the big hoick. England were bowled out for 93 in 51 overs. The match was over in less than 12 hours. Hadlee s 5 for 28 meant that he finished with the incredible figures of 35-15-44-8 in the match.

It was not just another defeat. English cricket plummeted into the depths of utter humiliation that day. Never before in the 20th century were they dismissed for sub-100 scores twice in the same Test. Getting bowled over by Australia or West Indies was one thing, but here they were completely decimated by New Zealand, who were hardly considered a force in world cricket.

At the end of the match, Willis tried to put up an excuse, but did not defend the shoddy performance: “We had the worst of the pitch, but it is no good hiding behind excuses. We played badly throughout the match. Our bowling was some of the worst I have ever seen in Test cricket.”

An elated Howarth commented, “This is one of my proudest moments in cricket. Some people might consider it a freak result, but we worked hard for it and once we had England on the hook we refused to let them off. Richard Hadlee proved yet again that he is without question one of the greatest all-rounders in the world. Our objective must now be to try and win the series.”

Howarth did succeed in his objective, as the third Test in Auckland petered to another tame draw after three Kiwi batsmen scored hundreds in the first innings. He became the first New Zealand captain to win a series against England.

Whether Pigott hastily re-scheduled his wedding on February 6 after the three-day finish remains shrouded in mystery; what is certain, though, is the fact that he did not play another Test. 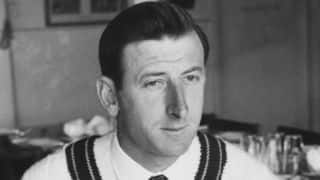 Bill Lawry: "A corpse with pads on"