Richie Benaud did not lose a single series as captain.

Richie Benaud, ace all-rounder, captain, journalist, and doyen of commentators, passed away on April 4, 2015. Born October 6, 1930, Benaud was a legend by every definition on the book, but there was more to Benaud than that. Abhishek Mukherjee lists 21 lesser-known aspects of Richie Benaud.

When Richie Benaud finished his career, he had the most wickets among Australians, and held the record for a decade and a half till Dennis Lillee went past him. He remains the one of three Australians with 2,000 runs and 100 wickets in Test cricket (Keith Miller and Shane Warne are the others). He regained the Ashes and retained it twice, and won series in India and Pakistan. He did not lose a single series as captain.

Additionally, he was the most lovable voice in the sport. The accent was silken and typical — one that everyone loved to imitate. The words were well-chosen and well-timed; there was no uncalled-for excitement; behind the microphone Benaud was the epitome of timelessness and sophistication.

There was more to him. Here, then, are 21 facts about Benaud.

The Benauds had arrived in Australia in 1840 on the Ville de Bordeaux. Captain Jean Arthur Albert Benaud, Richie’s great-grandfather, was keen on retaining the French heritage through names: his sons were called Louis Ferdinand Branxton and Richard Grainger Napoleon, the latter being Richie’s grandfather.

2. Runs in the genes

Lou Benaud, Richie’s father, was an excellent leg-spinner. Playing for Penrith Waratah, he skittled out St Mary’s for 52 and 79. He claimed all 20 wickets, and his figures read 10 for 30 (including a hat-trick) and 10 for 35.

Lou played for a Combined Casino side against New South Wales. He claimed 3 for 65 and scored 39 not out, and was immediately offered a place in a Sydney Club by Alan Kippax, no less, the opposition captain. Unfortunately, Lou was not sanctioned leave. He continued to play grade cricket.

However, as Gideon Haigh wrote in Game for Anything, Lou made a vow: “If… there were any sons in the family he would make sure they had a chance [to make a cricket career] and there would be no more schoolteachers in the Benaud family.”

Though cricket was his sport of choice, Richie had an affinity towards tennis as well. A six-year old Richie once partnered an eight-year old May Purtell in mixed-doubles; they thrashed a couple of 12-year-olds 6-0.

Benaud idolised Keith Miller while growing up, and it was no surprise that the two of them would count as Australia’s finest all-rounders. Benaud went to the extent of playing bareheaded (the Miller way) even during the hottest of summers.

Benaud was playing his second Test, at Sydney Cricket Ground (SCG) when John Waite cut one fiercely. It went to Benaud at gully; the upper lip was split, and the gum was smashed. Benaud survived, though a few inches on either side may have smashed his cheekbones or jaw, or even damaged an eye.

Benaud escaped narrowly. However, when he got married a few days later, he had to utter his promises with his face bandaged up. Not that it mattered.

John Benaud, 14 years younger to Benaud, made his debut eight years after Richie’s retirement. He played only three Tests, scoring 223 runs at 44.60 and taking two wickets at 6.00. The numbers being superior to Richie’s (24.45 with bat, 27.03 with ball), one can only imagine whether there was some taunting in the Benaud household!

India were already in trouble at 131 for 7 against Australia at Kotla in 1959-60. Along came Benaud, removing Nana Joshi, VM Muddiah, and Ramakant Desai as India collapsed to 135. Benaud’s figures read 3.4-3-0-3; he still holds the records for most wickets in an innings without conceding a single run. Nobody has taken even two.

8. Getting cheeky with The Don

Don Bradman, Chairman of Selectors, dropped Les Favell for the last Test at Melbourne in the 1958-59 Ashes. He picked four fast bowlers in Ray Lindwall, Alan Davidson, Ian Meckiff, and Gordon Rorke. Benaud was not amused: “You’ve left me with four fast bowlers”, he complained. Bradman responded with a smile: “That’s your problem.”

Perhaps concerned that four fast bowlers may make Benaud put England in, Bradman asked Benaud tentatively, just before the toss: “It’s never been done before, did you know?”

If Benaud was confused, it did not show: “What hasn’t?”

The great man explained: “No captain has ever sent England in to bat in Australia and won the match.”

It was Benaud’s turn to smile: “Well, there’s always a first time, you know.”

So Benaud won the toss, put England in, took 4 for 43, bowled them out for 205, and eventually led his side to a nine-wicket victory.

Benaud’s chemistry with Davidson was legendary, but there were moments when he had to be strategic to get that extra bit out of “Davo”. Reverend David Sheppard wrote about an incident, where Davidson had bowled a long spell on a very, very hot day. It was evident that he would not carry on for much longer.

Enter Benaud: “Just one more over, Al, pal. Bowl him another like that fourth one last over which moved in, then left him. You’re doing wonderfully.”

Davidson fell for it: “Just put the ball in my hand and show me which way to go.”

Benaud had a permanent problem with calluses growing on his fingers, which hampered his bowling. Desperate for a treatment, he consulted a pharmacist in Timaru, New Zealand. The man, Ivan James, suggested a combination of “Oily Calamine Lotion” and boracic acid powder. It worked.

Benaud famously wrote: “The word genius is much over-used in our society. Mr Ivan James turned out to be a genius.”

Ashes, 1961: Australia had gone up with a five-wicket victory at Lord’s, but England squared the series at Headingley, thanks to Fred Trueman. His 5 for 58 and 6 for 30 on his home ground for too hot for Australians to handle. The performance was lauded, even by the usually reluctant British press.

Benaud bought all newspapers and pinned cuttings of Trueman’s spell on them, in plain view of his teammates. To quote Benaud, “the reaction was good, though some of the language wasn’t.” Australia famously won the next Test at Old Trafford and retained The Ashes.

12. It was all about practice

To quote David Hodgson, Benaud was once asked to pen a book on leg-spin. He declined: “because everything you needed to know could be written on a side of A4 paper; you can pass on the theory in an hour but mastery through practice can last a lifetime”.

The incident happened during a tour to Pakistan. The team coach sped along the desert till another vehicle was spotted on the horizon. As the two vehicles approached, the players feared a collision and stuck to one side. Not Benaud: he kept reading, chewing gum at a leisurely pace; the giant carrier got away with a dent, but one side of the coach was severely damaged.

The entire team got down to inspect the damage. Benaud simply walked across the aisle, changed seats, and continued to read.

When Benaud joined the Channel Nine commentary team, Kerry Packer insisted Benaud (the ubiquitous anchor) stood out from the others in the studio. Benaud has been spotted in white and cream and ivory and beige, but seldom the darker shades of jackets (unlike his colleagues) while commentating.

Brian Johnston took up his first television assignment on June 22, 1946. Seymour de Lotbiniere, Head of Outside Broadcasts, gave Johnston a piece of advice that stuck: “Don’t speak unless you can add to the picture.” The advice was passed on to Benaud in due course of time, and it remained his mantra behind the microphone.

When the Channel 4 website was launched, they, along with Turtlez Ltd, created a software called Desktop Richie. It was animated, looked like Benaud, had the inimitable voice, provided match updates, and kept on saying “mwa-ve-las”, “got ’im!”, “that’s stumps”, and more at regular intervals. It is still available for free download.

17. Never in the Blighty

Benaud was a firm believer that cricket, and, in general, all sport, should be available on free-to-air television for everyone. When Channel 4 lost the rights of matches in England to British Sky Broadcasting in 2005, Benaud announced that he would not commentate in England again.

Billy Birmingham aka The 12th Man became famous for his impersonations of Channel 9 commentators, especially Benaud. Legend said that Birmingham overdid the “mwa-ve-las” bit to such an extent that he used the word judiciously in his later years, moving to “glorious” instead.

19. The Ashes that never happened

Benaud was diagnosed with skin cancer in November 2014, but a year before that, in October 2013, he had faced a major accident. He crashed his vintage Sunbeam Alpine (yes, he drove that, and he drove at 83) into a wall in Coogee. He missed out on the summer of 2013-14, which meant that he did not get a chance to commentate in what would have been his final Ashes.

Belmore Park — “a few hundred yards” from the Benaud’s — was where Richie and John Benaud played during their childhoods. It now goes by the name Belmore Park and Richie Benaud Oval.

The ultimate perfectionist, Benaud was not too keen on missing a single moment of the ongoing match. Unfortunately, the toilets in several grounds were not necessarily placed very close to commentary boxes. Add to that the fact that he was always held up by fans on his way; he invariably ended up missing some of the action. There was small talk, there were questions, handshakes, autographs, and more.

Trent Bridge was one such ground, where, as Arunabha Sengupta wrote, “his professional pride struggled uncomfortably against his full bladder”. Then, after years of missing out on live action, Benaud decided to act: he actually requested Nottinghamshire Cricket Council for a solution.

The management saw the problem: they arranged for a new toilet next to the commentary box, much to the delight of broadcasters. As one would expect, it got to be referred to as Richie’s Loo by everyone who knew of the incident. 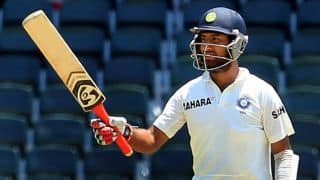