During his time at the Academy in Adelaide, Ponting met Shane Warne, who was already a Test cricketer by then.

Ricky Ponting, born on December 19, 1974, is one of the greatest batsmen to represent Australia. Ponting stands tall as a cricketing figure, with the most international runs and centuries for Australia. He is also their most successful captain in Test cricket and a three time World Cup winner, two of them coming when he was at the helm. From a small town in Tasmania, Ponting went on to rule the world with the mastery of his willow and left an indelible mark on history. Nishad Pai Vaidya picks 10 little known things from Ponting s young days.

1. Playing with the brother in the backyard

Ricky Ponting is the eldest of three siblings. His younger brother Drew Ponting bowled to him in the backyard, with Ricky batting for hours. When Drew would get his chance, Ricky would dismiss him soon enough to hold the bat again and resume.

Ponting came from a middle-class family. His father Graeme endeavoured to be a golfer as a youngster. He also used to turn up for cricket and Aussie Rules Football games. Ponting s mother Lorraine played for Tasmania in vigoro, a game that is said to be a mix of cricket and tennis. She was also good enough to play netball and badminton at a decent level.

Ponting s first earning through cricket did not come due to the magic of his willow. But, as a young boy, he was a part of the scoreboard crew at some Sheffield Shield games. For that exercise per day, he used to be rewarded with A$ 20.

4. Batting with his father in a club game

Ponting played most of his age group and initial cricket for the Mowbray Cricket Club in Launceston, Tasmania. In one of the games, Ponting and his father Graeme batted together. However, to his disappointment, Ponting senior was dismissed early while playing an aggressive stroke.

Ponting s mentor was Ian Young, whose son Shaun went on to play for Australia. In fact, Shaun Young and Ponting played a Test match together against England on the 1997 Ashes tour to England. Ponting remained close to Ian, until his death in 2010. Sadly, Ponting could not attend the funeral as he was in India, representing Australia in a Test match.

6. Giving up school and Football

As a young boy, Ponting had to make tough choices to pursue his cricketing endeavours. At the age of 15, he gave up football after suffering an injury to his elbow. He also dropped out of school after finishing Class 10. It was a big move I suppose, but it was pretty clear to everyone by then that cricket was the only thing I cared about, Ponting wrote in his book At Close of Play.

7. Working as a member of the ground staff at a school

As Ponting gave up school, he needed to get a job. His mentor, Young arranged an appointment for him as a member of the ground staff at a school called Scotch Oakburn College. Ponting recalled, That job confirmed for me that a life in sport was what I really wanted.

In 1992, when Ponting was a part of the Australian Cricket Academy, he first saw Sachin Tendulkar. Having heard a lot about him, Ponting asked the authorities to allow him to stay after practice to watch the Indian youngster. I wanted to see Sachin Tendulkar who everyone was talking about, and I took up a position behind the nets while he had a bat. It s fair to say I was going to watch him bat for a long time to come, but that day I was studying his technique, trying to see what it was about him, Ponting wrote in his book. In the lead up to the 1992 World Cup, India played a practice game against the Australian Cricket Academy. Tendulkar scored 37 in that match and was caught by Ponting. The Aussie in turn scored 23.

Ponting first bonded with Adam Gilchrist and Glenn McGrath on a tour to South Africa in 1992, where they were representing the Australian Cricket Academy. Ponting and Gilchrist sat next to each other on the flight to South Africa. Ponting recalled, Getting on the plane, I hardly knew Gilly [Adam Gilchrist] but by the time we landed in Jo burg we were best mates.

10. Punter and the Shane Warne connection

During his time at the Academy in Adelaide, Ponting met Shane Warne, who was already a Test cricketer by then. In fact, Ponting volunteered to bat against Warne whenever he wanted to bowl and work on his technique with Terry Jenner. Ponting s liking for dog races and his penchant for betting on them prompted Warne to christen him as Punter. It was a nickname that stuck with Ponting. Warne had tried to take Ponting to nightclubs, but he would manage to get away by making all sorts of excuses. 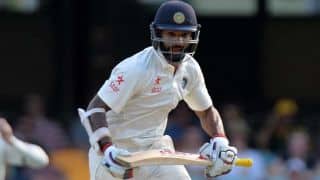