For the 1st time in ODIs, 3 batsmen from the same team scored a ton during the 2nd SA-WI ODI.

At Johannesburg for South Africa against West Indies, three centuries were scored for the same team in a One-Day International (ODI). Rilee Rossouw’s 128 was the highest third-highest score in an ODI innings. Bharath Seervi lists relevant numbers.

Hashim Amla scored 153 not out, AB de Villiers 149 and Rilee Rossouw 128 for South Africa against West Indies at New Wanderers on January 18, 2015. It is the first ever occasion when three men scored centuries for the same team in an ODI. The closest was Shikhar Dhawan’s 95 when Rohit Sharma (141 not out) and Virat Kohli (100 not out) scored centuries against Australia at Jaipur on October 16, 2013.

Rossouw’s 128 is therefore the highest ‘third-highest’ score in an ODI innings. There has been only one more instance of three batsmen scoring 90 or more runs for a team in an ODI innings: against South Africa at Basseterre in ICC World Cup 2007 Ricky Ponting was the third-highest scorer with 91 while the top two were Matthew Hayden (101) and Michael Clarke (92).

Highest ‘third highest’ score in an ODI innings (80 or more)

There are 11 more instances when the third-highest score was between 75 and 80.

If the entire match is considered, there have been 25 occasions when there were three centuries in the same ODI. However, Rossouw’s 128 is the highest third-highest score in an ODI. It is also the only occasion of three batsmen scoring more than 125 in the same ODI.

The highest third-highest score in a Test innings is 169 by Joe Hardstaff jnr for England against Australia in the Ashes 1938 where the top two scores were 364 by Len Hutton and 187 by Maurice Leyland.

The highest third highest score in a Test is 231 by Thilan Samaraweera for Sri Lanka against Pakistan at Karachi; Younis Khan top-scored with 313 and while Mahela Jayawardene scored 240. 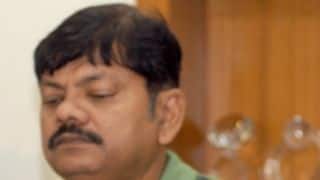