Kraigg Brathwaite and Shai Hope played on the back foot with soft hands, ran hard between wickets and looked to score when English bowlers erred in length at Headingley.

What did the world know of Shai Hope when he arrived in England? First, his elder brother Kyle is also in the squad. Secondly, he keeps wickets, and does a decent job of it: he has even played a Test as a specialist wicketkeeper. Thirdly, his first name is pronounced Shey or Shaye (not Shy ), and his last name is a journalist s delight. But most importantly, they knew that he averaged under 19 with bat. He did not exactly cover himself with glory at Edgbaston, either: 15 and 4 do not exactly make you a feared batsman.

Kraigg Brathwaite had better credentials (though people still Google whether he is related to Carlos). He averaged in the mid-30s, but more importantly, he came into the series having survived 85 balls per dismissal in Test cricket (the count is 87 now). To put things into perspective, the corresponding number for Brian Lara is roughly the same.

No, this is not a ridiculous comparison between the two. One may point out that comparing a grinder to a risk-taking (legendary) strokeplayer is unfair, but let me remind you of something here: Lara was famous for his monster hundreds, two of which had made it to the highest Test scores at that time.

Pakistan had a taste of Brathwaite last year in Sharjah. He had carried his bat in the first innings. And after West Indies were set 154, he had remained unbeaten again, to see them home. Pakistan had taken 15 West Indian wickets, but that list did not include Brathwaite, who scored 202 runs in 427 balls across 700 minutes, and never left the field.

But that superhuman effort was not the only marathon effort in Brathwaite s career. There was 106 at Port Elizabeth and 116 against England in St George s in a span of four months. In the disastrous 2015-16 tour of Australia, he opened batting and was last out at Hobart. He scored 94 out of a team score of 148. Later on that tour he got 85 at Sydney.

These were not innings you remembered, mostly because West Indies mostly lost the Tests or the series or both during these efforts. In similar fashion, Hope s 90 at Kensington Oval earlier this year (Brathwaite got 43) is forgotten despite the fact that they provided the cushion Shannon Gabriel needed later in the Test.

No, these are not men the cricket fraternity had expected to topple England at Headingley, probably not even England were bowled out for 258 on Day One. Hadn t the same West Indian side lost 19 wickets in a single day at Edgbaston?

The world probably had a lazy eye on the score as Brathwaite walked out. A chunk of them went about their businesses at 35 for 3 well inside the first hour. You could not blame them, not after that 19-wicket day at Edgbaston. Deep furrows of worry formed on the foreheads of the organisers at Headingley another three-day Test

But Brathwaite and Hope batted. They batted till the Yorkshiremen in the stands had lunch; when they broke for tea; and when the lead was taken care of. They scored hundreds, both of them.

They did not make the error of getting bogged down by the pressure of two of the most prolific wicket-takers in history bowling at them. Stuart Broad bowled short and wide, and was duly treated with disdain. James Anderson was more incisive and was handled with caution, but Brathwaite and Hope stayed on. Neither Ben Stokes nor Chris Woakes had an impact, and the runs flowed

Moeen Ali, the man who had floored South Africa on his own not too long ago, had no impact. In fact, Brathwaite chose him to hit an arrogant six to bring up his fifty and then lofted him over long-on. Moeen reviewed for an edge, but there was none, but Brathwaite stayed put and celebrated with consecutive fours off Stokes.

And as expected, he got to his hundred by lofting Tom Westley s docile off-breaks into the stands over long-on.

Hope, streaky at times on either side of tea, played the shot of the innings. The pull off Stokes that took him to 99 probably reminded the expatriates in the stands of those glorious islands they call home.

But there is a reason they call England the deepest batting line-up in contemporary cricket. There was no hundred, but six men got to fifty including the men at eight and nine. Joe Root set West Indies a target of 322.

Did Root know he was challenging history? Two of cricket s greatest chases by The Invincibles in 1948 and by England in the 2001 Ashes had happened on this ground; they had also involved the three highest fourth-innings scores on the ground.

If that was distant history, what about the fact that two West Indians had put up a superb rearguard action in the first innings? And, well, what was that statistic about nobody scoring a hundred in each innings in a First-Class match (let alone a Test) at Headingley in over 12 decades?

But then, there was another curious statistic to be pondered upon. It might have been a coincidence it surely was but England had lost the second Test in each of their three previous series.

Five of the runs were taken care of the fourth evening. The next morning saw the score crawl to 15 in the 10th over.

Then Broad bowled outside off, short of a length, Brathwaite poked, and the ball went straight to Alastair Cook.

Nine out of ten times does Cook pouch these. This was the tenth. Brathwaite got a life.

But Broad came at West Indies hard to take out two wickets one of them not quite deliberate, but a wicket nevertheless. Unfortunately, none of these was Brathwaite s; or Hope s.

Brathwaite, for some reason, slashed at two balls (something certainly not advisable at 53 for 2) that followed and got two fours. On another day Broad might have got at least a wicket but he was not destined to get Brathwaite. Broad beat Brathwaite, was hit back for four, he beat the bat again, Brathwaite smothered him and Brathwaite won the battle. A dreary Broad dragged himself back towards the fence.

There was Moeen to be taken care as well. Obviously, it had to be Brathwaite, who slogged him to leg.

Hope was hiding somewhere (I will not make the Pandora s Box pun here) all this while, but when Root attacked with Anderson after lunch, he decided to take on England s leading wicket-taker. Anderson did what he should have: he pitched up trying for that edge. Unfortunately, there was little movement, and Hope drove and slashed at him. The danger man had been seen off.

They continued, Brathwaite and Hope, one eye on the ball, the other on the clock, finding gaps to pick up the odd boundary. They added hundred in under 27 overs. The target came down, first to 200, then to 150

The shoulders started to drop. Frustration showed. Stokes refused to stick to basics. He bowled short. He tried to bounce them out. Brathwaite pulled and top-edged one for four.

Then Moeen bowled one so slow that it should have come with a disclaimer that they had not turned the Super Slow-Mo on. Brathwaite, almost hypnotised by the awkward slowness of it, went for a swipe and edged. He had missed out on becoming the first cricketer to score two hundreds in the same Test at Headingley.

Roston Chase had made headlines when he saved a Test against India in 2016. His performances against Pakistan earlier this year ensured those headlines were printed in larger, bolder fonts. They needed another 123, but they still had both hope and Hope.

Root went for the kill. Anderson and Broad were immaculate with their line and length. They bowled three maiden overs on the trot. Suddenly asking rate came into the equation. Should they go for the kill? Should they play safely for 10 overs?

The tension broke when they acquired four leg-byes. Anderson, cut ferociously to the fence, came back with two beautiful deliveries, but the target had come down to the two-digit panic zone

Anderson got consecutive edges off Chase. Neither got him a wicket. An overthrow from Stokes made it to the fence. Then Mason Crane, on as substitute, took a stunner to send Chase back. And out came Blackwood, with clear instructions.

Tension set in. A run out was missed. Hope, hit on the pad, was let go by both the on-field umpire his mate in front of the television set. Blackwood, refusing to allow the bowlers to get on top, hit Broad past mid-on for four and, more outrageously, Anderson over his head for six the six that probably sealed it for West Indies psychologically.

Then Hope got his second hundred of the Test, defying decades worth of history, and celebrated it with a dazzling cover-drive off Anderson back with the new ball.

Broad, refusing to give up, bent his back that extra bit and got another edge, this time off Hope. Once again it flew to Cook. And once again it landed on the grass. They needed another 37.

Hope was then almost stumped off Moeen, almost sat down on the stumps while ducking against Broad, and almost hit one back to Broad. Unfortunately, three almosts do not amount to a wicket

Hope stayed on. There was no way he was in the mood to throw it away. West Indies have collapsed in the past. Hope needed to be there. He could not afford to look shaken despite those half-lives.

But Blackwood had no such reservation, for he casually slashed Broad over the third-man fence. It was only fitting that Hope would score the winning runs.

Is West Indies cricket reborn? No, because it was a solitary Test win. Yes, because they pulled it off without their superstar cricketers. Perhaps things will change, or perhaps they won t.

But there is no doubt that they have pulled off one of the greatest chases of all time against all odds. And all that was made possible by two men, none of whom got reasonable mention in the pre-series previews across media, especially in Britain. 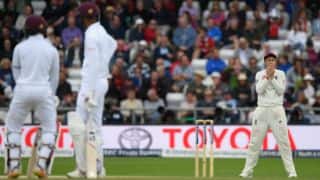