MS Dhoni will be teaming up with old mate Stephen Fleming — who was named RPS’ coach — for the next two seasons of IPL.

The two-year ban on Chennai Super Kings (CSK) and Rajasthan Royals (RR) has paved the way for two new teams for the next two editions of the Indian Premier League (IPL). IPL 2016 and 2017 will have the Rising Pune Supergiants (RPS) and Gujarat Lions (GL) rubbing their shoulders with the rest, with players from the two banned IPL teams and many others turning up for the new sides. While Suresh Raina — IPL’s highest run-scorer and an excellent Twenty20 player — has been entrusted with the responsibility of leading the Gujarat Lions, MS Dhoni has been heralded as the leader of the Rising Pune Supergiants (RPS).

Dhoni will be teaming up with old mate Stephen Fleming — who was named RPS’ coach — for the next two seasons of IPL, until their side Chennai Super Kings (CSK) is allowed back in the tournament. The two new teams had the option of bidding for five players each, with Rising Pune Supergiants being the first bidder in the process. READ:  MS Dhoni to lead Rising Pune Supergiants in IPL 2016

The Rising Pune Supergiants will have the Maharashtra Cricket Association Stadium in Pune as their home ground, and since this IPL will be their first, there is obviously no team history. However, they do have some of the best players of the format as well as the tournament already, which is indeed a good start for them.

The Rising Pune Supergiants is owned by New Rising Promoters, belonging to the RP-Sanjiv Goenka Group. In the first-ever reverse bidding process for the two new IPL teams, the RP-Sanjiv Goenka Group paid a price of Rs 16 crores to the Board of Control for Cricket in India (BCCI) for owning the Pune-based franchise, a move that was taken by them only for branding purpose. For those uninitiated, the Intex Technologies Pvt Ltd paid Rs 10 crores for the Rajkot-based franchise.

Since RP-Sanjiv Goenka Group paid more, they had the right to bid for players ahead of the Rajkot franchise. Rising Pune Supergiants picked up Dhoni’s trusted men from CSK in Ravichandran Ashwin and Faf du Plessis. The other two players who were selected were the two prominent batsmen from Rajasthan Royals, in Steven Smith and Ajinkya Rahane.

With the core of the team already decided, the Rising Pune Supergiants will be looking to enhance their side with fast bowlers, as well as few more big-hitting all-rounders who can provide their team the requisite balance as well as firepower. With Dhoni at the helm, the wicketkeeping woes are taken care of and so is the need of having someone in the lower order who can provide the necessary acceleration.

The presence of Smith and Rahane provides Rising Pune Supergiants enough stability in the top order, and they are expected to look for big-hitters in the top order who can launch attack right from the word go. The form of Faf du Plessis has indeed been a concern of late, but a quickfire 25 or 30 is enough for any side in the shortest format of cricket. READ: Stephen Fleming appointed Pune IPL team’s coach

Rising Pune Supergiants were spot on in the formation of the core of the team. In Dhoni and Smith they have good leadership, and in Ashwin they have someone who can look after the bowling department. Ashwin has been one of the most improved cricketers in the past few years and even though his feats overseas have not been as great as at home, the opportunity of playing IPL in favourable conditions will spur him to tame batsmen once again.

Going into the auction, the Rising Pune Supergiants (RPS) have a balance of Rs 27 crores to acquire the rest of the squad. They currently have five (including two overseas players), which means they can add 22 more in their squad. The IPL rules say a team can have maximum squad strength of 27 players, and the maximum limit of overseas players is nine. The Rising Pune Supergiants can be expected to go all out against those who have lesser money and bigger squads going into the IPL 2016 auction. 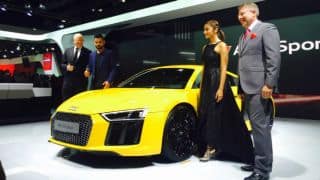 Virat Kohli eager to own fastest Audi in India