A First-Class giant, Robin Jackman is best remembered for the abandonment of a Test in West Indies. He later became a popular commentator. 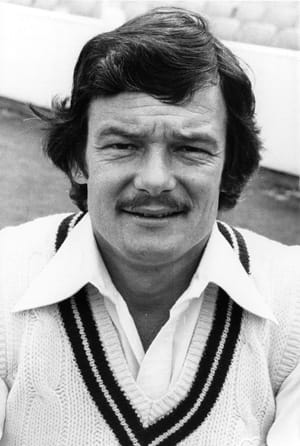 Robin Jackman was born August 13, 1945, in Shimla. Jackman, who had a long run-up and a strong follow-through, is best remembered for the abandonment of a Test in West Indies. Jaideep Vaidya goes through the career of Jackman, who is now a very popular commentator known for his hoarse voice and fine observation of the game.

Mention Robin Jackman‘s name to a youth who knows what a cricket bat is, and the most likely reaction would be “that commentator with a gruffy voice.” Jackman in the new millennium has become synonymous with his crackling voice on air, whose hoarseness has increased a notch since he was treated for malignant tumours on his vocal cords in 2012. It’s a voice that’s easily recognisable and popular, especially in South Africa where he has settled with family since retirement from his playing career.

It is thus rather amusing that Jackman’s voice was perhaps one of the most detested on the cricket field in his playing days. Back then, when he played for Surrey, who were in any case considered an arrogant bunch, Jackman had a reputation of theatrically appealing a tad too much to his opponents’ liking. Ian Botham, one of his counterparts at Somerset, wrote in his autobiography Head On, “When I first played against him I wanted to knock his head off because he really antagonised me; I thought ‘you arrogant, strutting gnome’.”

The archetypically whimsical cricket writer of yore, Alan Gibson, was a little more subtle when he came up with a moniker for Jackman writing for Times — Shoreditch Sparrow.

He may have chirped more frequently and louder than a sparrow while bowling, but otherwise, Jackman was one of the most affable and amiable blokes around. Botham would go on to correct his opinion of Jackman when he wrote, “…I got to know him and found he was the life and soul of the party and a brilliant team man. He would bowl all day, bat all day, and do anything a captain wanted.”

Jackman was born in the northern Indian hill town of Shimla in 1945, where his father was a major with the 2nd Gurkha Rifles. When Jackman Sr. lost a leg in war, their family moved back to Surrey in 1946. This was where young Robin first got introduced to cricket by his father. “Pa spent hours throwing balls at me and teaching me to bowl length and line by placing a handkerchief on a Malthoid pitch he had laid in out back garden,” Jackman wrote in his autobiography Jackers: A Life in Cricket. “He paid me sixpence every time I hit the handkerchief — and fined me a penny every time I bowled down the leg side. He would stand there, on his good leg, throwing balls at me for hour after hour. If Pa hadn’t spent so many hours helping me I would not have been able to get to where I eventually did.”

Interestingly, Jackman initially wanted to be an actor as a child. His uncle was the famous comedy actor Patrick Cargill, who incidentally was the one who dissuaded Jackman from pursuing the career due to its sorry success rate. “In that case, I’ll play cricket for Surrey and England,” said Jackman promptly, after a short discussion at lunch. The cricketing world benefitted from the decision as Botham was to later testify that Jackman would have done well on stage. “He’s got a fabulous sense of humour and when we travelled on coaches he would sit at the front, grab the microphone and entertain us with his John Hancock routine. I’m convinced he was good enough to have gone on stage.”

In his developing years, Jackman was a batsman who could bowl handy off-spin. His father pulled him out of school at age 17 as he saw a future for his son as a professional cricket. This was when he applied for a trial at Surrey and was selected in 1964. Having been brought up in a sheltered environment, Jackman was to get a cultural shock when he witnessed a few first XI players swearing at each other during a practice session. “I think I’ve chosen the wrong career,” he told his father. “I don’t seem to have anything in common with the other guys.” Jackman Sr., a little more experienced and wiser than his teenage son, said, “You do have something in common with them. You can play cricket and so can they. This is your best chance to do something you really enjoy so forget about the fact that they might talk a bit differently. Forget about the swearing, in fact, learn to swear and join in.”

It took Jackman a couple of years to break into the first team which was earlier filled with stars such as Ken Barrington, Jim Laker, Geoff Arnold, Micky Stewart, John Edrich, Richard Jefferson and Stewart Storey. It was here, bowling in the nets to the county’s senior batsmen, that Jackman switched to becoming a fast bowler. He made his First Class debut in 1966 against a weak Cambridge side and picked up three wickets in the first over of the second innings.

What happened in the first innings is an amusing tale: Jackman idolised Fred Trueman and had heard that the England great had a cheese roll and beer for lunch. Jackman did the same on the first day at lunch, and got sick. Captain Micky Stewart, who had witnessed Jackman’s little stunt, decided to teach his young teammate a lesson. “Okay Jackers, you take the pavilion end, first over after lunch” he said. Jackman recounted, “Bowling had never seemed so difficult. I lumbered in, over after over. Micky didn’t say a word but I got the message.”

Jackman was to later get a chance to meet his idol Trueman, when he played against Yorkshire. Trueman’s presence inspired Jackman to stick around at the crease with the bat for over an hour to rescue his team from a collapse, putting on a half-century partnership with Mike Willett. Later, when Jackman met Trueman in a bar, the latter said, “Well done, lad. You had a good day today. I’ll tell you what, I’d like to have you in my team because you don’t give up.” Jackman called it “the biggest compliment anyone had ever paid me”. Robin Jackman was around 5’9″ tall and did not bowl what you would call express pace. But he made up for it with good line and length bowling © Getty Images

Jackman went on to have a very successful stint at Surrey, where spent 16 years of his playing career before retiring in 1982. However, an international call-up eluded him until the 1980-81 county season, where Jackman took 121 wickets, 20 more than anyone else. He had never before crossed into three figures in a season and his performance earned him a place in England’s 12-man squad for the Centenary Test against Australia at Lord’s.

However, he was handed a cruel blow when he checked into the team hotel in London, where the receptionist asked him, “Ah yes, you’re only with us for three nights, aren’t you?” Back then, the 12th man in the squad would stay with the rest of the team for only the first two days before returning home for his county’s match on the Saturday. Jackman thus knew that he wouldn’t be playing. “It would have been nice to have been informed by someone a little closer to the cricketing network, albeit not nearly so attractive,” he wrote later in his trademark humour.

Jackman, 35, got his second chance during England’s tour of the Caribbean in 1980-81 after Bob Willis pulled out injured after the first Test, which England lost comprehensively. Jackman was called in to take his place and was named in the XI for the second Test at Guyana. However, fate was to deny him a game again in what came to be known as “the Robin Jackman affair“.

Jackman had a South African wife and had spent a lot of winters playing cricket for Western Province and Rhodesia at a time when South Africa was still grappling with the evils of apartheid. The country had been isolated internationally from sporting events. Jackman had, in fact, warned the erstwhile TCCB of his connections when he was put on the reserve list for the tour. However, he was told that it wouldn’t be a problem. When the Guyanese government came to know of Jackman’s South African connect via a radio broadcast, they refused to allow him to play the Test. Fortunately for Jackman, his team management stated their position as “accept the team as a whole or we don’t take part”. The Test was cancelled.

This was also the time when Barrington, who was the manager of the team and very close to the players, passed away overnight during the tour. Botham wrote in the foreword to Jackman’s autobiography: “It must have been a stressful time for Robin but he coped really well and I soon got to appreciate how much value he added to the team. It was my pleasure to be the one to tell him that he had finally won his first Test cap. Along with the rest of the team, I shared his joy when he took a wicket in his very first over in Test cricket [in Barbados during the third Test].”

Unfortunately, Jackman was well into his thirties when he made his international debut and would go on to play just 4 Tests, along with 15 ODIs, taking 14 and 19 wickets respectively. However, his massive First Class career, where he retired just one short of 400 matches, enabled him to take an eye-popping 1,402 wickets. He also scored 17 domestic half-centuries with a highest of 92 not out.

Regardless of his short international career, Jackman left an indelible mark on the England team. Botham wrote, “Apart from his value as a team man able to lift the spirits of the group, I appreciated Robin’s intelligence and his ability to hold a conversation on almost any topic. As a young captain in the West Indies I was out of my depth when it came to political matters and it was really interesting to hear Robin talking about race and apartheid in South Africa, among other subjects. He made a tough tour a lot easier.”

Jackman was no Marshall or Holding. He was around 5’9″ tall and did not bowl what you would call express pace. But he made up for it with good line and length bowling. “He trundled in, sent down a ball that tested the batsman’s technique… and probably appealed,” wrote Steven Lynch in Wisden International Cricketer 2012.

“As a cricketer he always gave a hundred per cent,” said Botham. “I teased him that he had a ‘little man syndrome’ — he’s not the tallest bloke for a fast bowler — because he was always trying to bowl faster and better than anyone else. He was a captain’s dream because he would run in all day and hardly bowl a bad ball. He had terrific ability too, which is reflected in his superb career figures. He was unlucky not to have played in more Test matches but there were a lot of good quick bowlers around at the time.”