On May 21, 1993, England batsman Robin Smith smashed 167 off only 163 balls in a One-Day International (ODI) against Australia. Nishad Pai Vaidya reminisces about that knock. Robin Smith drives during the course of his unbeaten 167 against Australia at Edgbaston on May 21, 1993 © Getty Images

On May 21, 1993, England batsman Robin Smith smashed 167 off only 163 balls in a One-Day International (ODI) against Australia. Nishad Pai Vaidya reminisces about that knock.

On his day, Robin Smith could dominate the best in business. He fearlessly took on the might of the fiercest fast-bowlers and dealt with them with great dexterity. On May 21, 1993, the Australians got a taste of his aggression in a One-Day International (ODI) as he smashed a memorable hundred in testing times. His innings of 167 not out remains the highest score by an Englishman in an ODI.

It was a damp day at Edgbaston, Birmingham and the Australian captain Allan Border had no hesitation in allowing his bowlers to exploit the conditions. Graham Gooch and Alec Stewart started things off for England amidst the tough conditions. Stewart fell early for naught as Craig McDermott shattered his stumps. In walked Smith to take on the challenge and set a new benchmark for his countrymen.

The Australians had a formidable pace battery comprising the inimitable Merv Hughes, McDermott and Paul Reiffel. Smith had his work cut-out against this attack as they had their tails up in helpful conditions. He got into his stride with a beautiful straight drive off the bowling of Hughes. The mid-off was too wide and could only retrieve the ball back.

The England batsmen were finding it tough as run-making wasn’t an easy task. Even as Smith found his feet, McDermott snared his second victim as he had Gooch caught behind for 17. The England captain had struggled for 49 balls and it just showed how difficult it was in the centre. In the first 15 overs, England had only scored 43 and had lost two wickets.

Smith played with application and attacked on the front-foot if anything was there in his half. Reiffel was sent for two fours down the ground as Smith punished the loose deliveries. Though Smith was doing decently well, things weren’t hunky-dory at the other end.  Graeme Hick didn’t last long as Rieffel had him caught by Ian Healy. England were in a spot at 55 for three.

The Australian bowlers were dominating proceedings. In partnership with Neil Fairbrother, Smith gradually went about the task of rebuilding the innings. The batsmen couldn’t get on top as the bowlers maintained a stronghold. Fairbrother’s 23-run vigil came to an end with England on 105. Soon after, Smith got to his fifty with an easy single through the leg-side. At that stage, England had only scored 106 in 33 overs.

The Edgbaston crowd welcomed the milestone as they didn’t have much to cheer in the attritional contest. Smith’s fifty had come off 91 balls.  In the overs that followed, England could only find the odd boundaries. Graham Thorpe gave Smith good support with a gritty knock.

In the 41st over, England were in the 130s and needed a real surge to push towards a competitive total. Going by the standards in that era, they would have aimed for 230 or 240 for a decent chance of defending a score. Thorpe’s determined effort at the other end gave Smith the opportunity to take his chances. With the field in, he was ready to target the areas down the ground as he moved into the 90s.
Hughes was then carted over point as Matthew Hayden was a mere spectator in the deep. He moved to 95 and the impending milestone did not deter him from playing his strokes. Then, he had a stroke of luck as Hughes induced an edge, but it over Healy’s head for four.

That boundary took Smith to 99 and the crowd stood up in anticipation. He pushed the ball past mid-wicket for an easy brace to complete a well deserved hundred. He had battled the tough conditions and the Australian bowlers for this feat. Smith took his helmet off and acknowledged the appreciation. The British Prime Minister, John Major was present in the crowd and was seen applauding the effort. England only had 185 on the board then and Smith had scored 101 of them, which shows that he did the bulk of the scoring.  Lady Luck favoured him again as another edge went past Healy in the same over.

With a little over six overs to go (it was a 55 overs game), Smith held the aces to take England to a good total. By then, he was able to play through the line and target the boundaries. There was a sense of urgency now as he smashed one over Reiffel’s head for a maximum in the 51st over. Seeing that fly over long-off, Bill Lawry exclaimed on air, “That’s a ripper!!” Bob Willis said, “Robin Smith is treating Paul Reiffel like a club bowler.”

Reiffel hit back by pitching it in the blockhole. After a dot ball, he flicked a delivery through long-on for another four. Tim May put in a desperate diving effort, but couldn’t stop the ball. That stroke took Smith to his highest one-day score. Today’s generation may liken that shot with Mahendra Singh Dhoni’s helicopter shot as Smith took his front leg out of the way and wafted the bat in the line.

There was no respite for Reiffel as Smith was in the mood to give it a swing. Smith then smashed him over mid-wicket for a second six of the over and Reiffel took his cap from the umpire in disgust. He had conceded 20 off that over.

In the next over, Smith got to his 150 with an audacious hoick over the covers. The crowds cheered his achievement as he had turned things around for England. Even the bowler, Steve Waugh applauded the magnificent effort. Smith was now ready to charge to the fast-bowlers and loft them over the in-field. In the end, Chris Lewis contributed with a small cameo to lift England to 277.

A team that was tottering for a major part of the innings managed to recover courtesy this fantastic innings. As Wisden reported, Smith scored his last 76 runs off only 30 balls. It has taken him only 20 balls to move from 100 to 150. That pace is fantastic even when you put modern T20 standards into perspective.

Sadly, England could not secure a victory. Mark Waugh’s brilliant hundred and Border’s unbeaten innings of 86 saw Australia chase down 278 inside 54 overs. Nevertheless, this innings by Smith will be remembered for its sheer aggression. In many ways, it was an innings way ahead of its time.

Man of the Match: Robin Smith 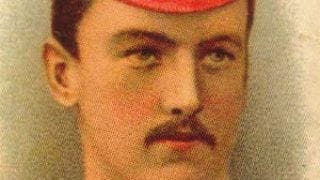 JJ Ferris: A bowler with a staggering Test record who died young