Robin Uthappa has had a fairly good year, much like his 2004 Under-19 World Cup teammates, in his bid to make a comeback into the Indian national side. Aayush Puthran feels the Karnataka batsman would do good to stay positive and make use of ideal opportunities. 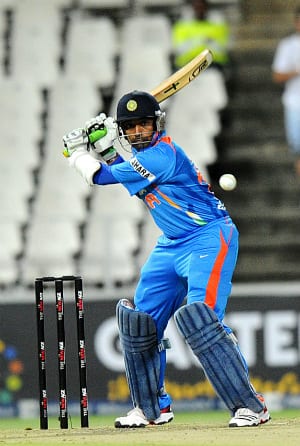 Robin Uthappa has had a fairly good year, much like his 2004 Under-19 World Cup teammates, in his bid to make a comeback into the Indian national side. Aayush Puthran feels the Karnataka batsman would do good to stay positive and make use of ideal opportunities.

One wonders if the 2004 Under-19 batch, at purely individual levels, would be a happier bunch if they were to sit together for a drink in 2013. After not a single player from the graduating class of 2004, barring Suresh Raina, being able to cement his place in the Indian limited-overs side for nearly a decade, today three players comfortably make it to the Playing XI while another one is well-placed on the benches.

For Robin Uthappa, at 27, it would be a great inspiration to see his former opening partner Shikhar Dhawan and wicketkeeper Dinesh Karthik make the most of the second lease of life to mark their return to the Indian side, and how!

His career has been about a lot of ‘ifs’ and missed opportunities so far. Unfortunate at times, you may say but Uthappa has let enough chances slip from his hand. In 38 One-Day Internationals (ODIs) spanning across three seasons Uthappa managed to score only 786 runs at an average of 27.10. Consider the debut against England at Indore in 2006. He scored 86 runs and promised a lot. The fearlessness in his approach, the belligerence at the top of the order and the run-hunger saw him become the integral part of Indian setup when Greg Chappell was at helm of Indian cricket.

He was ideally suited to the shorter format of the game. He is India’s first half-centurion in Twenty20 Internationals (against Pakistan at Durban in 2007 World T20). But the script lost the plot. Uthappa was soon the forgotten man in Indian cricket. Looking at the current composition of the national ODI team, Uthappa literally has no place in the team. But the batsman’s job is to keep scoring runs and wait for the opportune moment. Uthappa has been trying to do that, ever since he was axed from the national team.

The Bangalore-lad hasn’t had an extraordinary year, yet decent enough to keep him in the reckoning for most top-level tournaments in the country. His performance in this year’s Indian Premier League (IPL) might look average on paper, but his performances proved to be a strong foundation match after match for the struggling Pune Warriors. He followed it up with an attacking triple ton against Jharkhand in the Safi Darashah Trophy.

However, the Karnataka player needs to make the best of the opportunity at hand against the touring New Zealand A side. His well-paced century in the first unofficial ODI is likely to be taken seriously, but it would be foolish to judge him on the basis of just one innings. Nonetheless, Uthappa needs to use this to his advantage and capitalise on good scores, knowing very well that the tournament of such enormity would be followed keenly by Sandeep Patil and Co as they march on their mission to invest on a revamped and energetic side.

What in all subtle ways points out at Uthappa’s hunger to get back into the side is his relentless efforts behind the scene. Hiring the services of Pravin Amre as personal coach, he trained hard at the Mumbai Cricket Association (MCA) nets in Bandra during the off-season.

What is all the more great to watch about Uthappa is his endless pursuit to be fit. It is a rather lesser known fact that an attack of epilepsy at the age of 10, followed by steroid medication for more than three years had slowed down his metabolism resulting in an eternal battle with the bulging body. However, the hard-hitting batsman has continued to maintain good shape despite a string of injuries.

These efforts come in sharp contrast from how Uthappa was and as he had admitted to ESPNCricinfo, “I stopped working as hard as I used to. My work ethics definitely suffered. I would rather stay in the room than get some work done in the gym. I would rather hit 20 balls less than 40 more, like I used to do in the past.”

Much like his Under-19 teammate RP Singh, Uthappa’s story so far has been one of disappointment after raising expectations of plenty. However, he would do well to take positives from his former skipper Ambati Rayudu and opener Dhawan to mark his comeback into the national side at 27.