Uthappa's numbers are better than Manish Pandey, Ajinkya Rahane and Shikhar Dhawan, yet missed the bus.

Robin Uthappa has been India’s most consistent T20 player in the year 2014. He dominated with the bat during the Indian Premier League 2014 (IPL) and the Champions League T20 2014 (CLT20). Yet, he hasn’t been named in India’s squad for the lone T20 International against West Indies. Nishad Pai Vaidya compares his statistics to some of those who made the cut.

Why has Robin Uthappa been left out of the India T20 International squad for the one-off encounter against West Indies? Uthappa has by far been the most impressive batsman in T20 cricket this year and has been unfortunate to miss out on selection. Instead, his Karnataka and Kolkata Knight Riders (KKR) teammate Manish Pandey made the cut. And, to top it all, the frontline openers in the Indian side have inferior numbers in T20 cricket when compared to the prolific Uthappa.

Since the 2013-14 domestic season, Uthappa has shown great consistency and was an important part of the successful units at Karnataka and KKR. During the Indian Premier League (IPL) earlier this year, he recorded nine consecutive scores over 40 while opening the batting. It wasn’t just about the numbers but the manner in which he batted which caught the eye. Though he was aggressive and maintained a good strike-rate, he largely looked sensible and played good cricketing shots. Uthappa was balanced at the crease and showed that he is a much improved player.

Here are Uthappa’s compelling statistics in the IPL and the Champions League T20 (CLT20) 2014 this year:

Now compare those numbers to Pandey’s in the same tournaments:

Pandey has had a good CLT20, but Uthappa has performed well in both tournaments. He deserved a call-up ahead of Pandey if the selectors had to choose between the two. The other point is that, though Pandey is often talked about as a good T20 player, his overall career numbers are not very good. His strike-rate is under 120 and average is 26.96. Uthappa’s overall career average is slightly better at 28.88, but his strike-rate of 132.15 is miles ahead. Considering all these numbers, Uthappa would have been a better option.

Comparisons with the India openers

Ajinkya Rahane and Shikhar Dhawan have been named in the squad. However, they haven’t had a good run in T20 cricket in 2014. Both have played four T20 internationals each and have scored around 60 runs. Even in the IPL, they weren’t as dominant for their respective sides. Here are the numbers:

Rahane and Dhawan’s strike-rates aren’t too impressive. In fact, Dhawan struggled in the ICC World T20 2014 and Rahane replaced him. He did slightly better but did not set the stage alight. Dhawan did play a good hand in the recent T20 International against England, but he doesn’t inspire too much confidence with his numbers in the format. Also, Rahane isn’t as aggressive as an opener when compared to Uthappa.

Uthappa could well consider himself unlucky as he has the numbers on his side — better than some of the men who have been included in the side. You can’t argue with success, but at times, it isn’t as persuasive. Uthappa has every reason to feel hard done by. 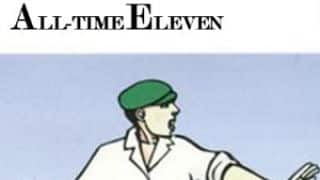 Jeeves and the All Time Eleven