Rohit Sharma 208: The 4 sixes that burst the Suranga Lakmal bubble

Rohit Sharma 208: The 4 sixes that burst the Suranga Lakmal bubble

Suranga Lakmal has been Sri Lanka s most potent weapon this tour. The only who has consistently challenged the Indians.

Suranga Lakmal gets the first ball to shape away. Rohit Sharma pokes at it. It falls short of slips. This turn out to be the order of the day. A few would whiz past Rohit s edge before another beauty from Lakmal finds the wood before making its way to Niroshan Dickwella s gloves. Less than an hour later, India s score read 29 for 7. Lakmal would finish with 4 for 13 and Sri Lanka with a win, a rare win after 12 consecutive ODI losses and a win against India after 12 games.

Lakmal has been Sri Lanka s most potent weapon this tour. The only who has consistently challenged the Indians.

Over a six-hour drive from Dharamsala, in Mohali, the buoyant Sri Lankan side had expected the same domination when they opted to field again. An overtly optimistic Thisara Perera surprised by giving the first over to Angelo Mathews not Lakmal. Mathews had dismissed Rohit 9 times in international cricket. Rohit respected the nip in the air and the gentle but accurate medium pace bowling to play a maiden.

Shikhar Dhawan welcomed Lakmal with a gorgeous cover drive to the fence. Rohit was content with playing the second fiddle.

Rohit would take his time. India started slow. Rohit let Dhawan dictate in the second half of their partnership and then let Shreyas Iyer take over. It was in the 40th over, off the 115th ball he faced, Rohit got to the hundred mark. Nothing unusual yet. Quite modest by today s standard. He had gone past Virender Sehwag s tally of 15 ODI hundreds.

Rohit during different phases at Mohali

Iyer had already upped the ante in the over prior to Rohit s hundred. India looked set for 340-350. The usual pattern is doubling the 30-over score. Quite contrary to Rohit s lazing methods and going for sixes, he was happing sprinting between wickets as Iyer targeted the ropes.

Iyer gave Rohit the strike and then began the madness.

This is what it would have resembled, in text commentary format:

43.2: SIX! Lakmal tries the usual death-bowling formula of bowling it way outside off-stump. Rohit walks across and deposits it way over deep midwicket.

43.3: SIX! Lakmal attempts a yorker, Rohit slightly moves across and whips it over deep square-leg. The beast-mode is switched on.

43.5: SIX! Short of good length slower ball and Rohit pulls it over midwicket for the same result.

Lakmal spared in the final ball. Another full toss but Rohit does not make contact.

Next over, he smacked Nuwan Pradeep for back-to-back sixes en route a 153-ball 208 not out.

Lakmal finished with 8-0-73-0. Pradeep, another star from Dharamsala, ended with 10-0-106-0. From his spell in Kolkata to the vomits in Delhi to destruction at Dharamsala, Lakmal has inflicted enough embarrassment to Indians a few times this tour. Now was Rohit s turn to return the favours. 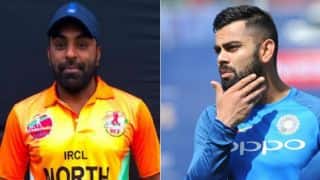 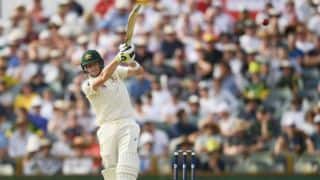