Rohit Sharma's 264 against Sri Lanka is the highest score in One-Day International history.

Rohit Sharma, born April 30, 1987, has long been one of the most frustrating batsmen in the Indian cricket team. Ever since he scored a half-century in his maiden T20I innings against South Africa in the ICC World T20 2007, the immense class he possessed was unquestionable. Sadly for Rohit and for India, it took him around 6 years to finally find some modicum of consistency. Ever since moving to the top of the order, Rohit has paid back all the faith shown in him over the years. Since 2013, he has been one of India’s best limited-overs batsmen, scoring runs by the truckload. Full Cricket Scorecard: India vs Sri Lanka 2014-15, 4th ODI at Eden Gardens

On November 13, 2014, 376 days after he had scored his first ODI double century, Rohit bettered himself in phenomenal fashion. For most cricketers, scoring 209 in an One-Day International (ODI) would be impossible. To replicate the effort would be inhuman. To outshine it so thoroughly was something only Rohit could have done. And he did.

The build-up: After West Indies bailed out of their tour of India midway through, the BCCI made a few frantic calls so that India would have some much-needed match practice ahead of a gruelling tour of Down Under. Sri Lanka answered the call, and came to India for a five-match ODI series. MS Dhoni opted out, so Virat Kohli led India.

The match: With the series already in the bag for India, the two sides met for the fourth time at Eden Gardens, a ground which Rohit has a special love for. Rohit had missed out on the last few months with an injury sustained in England earlier in the year, and was making his international comeback in the fourth ODI. Dhawan was rested, and Rohit walked out to open for India with Rahane after Kohli won the toss and chose to bat.

The costliest drop in ODI history: The in-form Rahane started off in brilliant fashion, hitting Nuwan Kulasekara for 3 boundaries in the first over of the match, and then followed up with a fourth off the first ball of Kulasekara’s next over. In comparison, Rohit took his time to get his eye in after a long lay-off.

With India comfortably placed at 22 for no loss after 4 overs, Shaminda Eranga came into the attack. Rohit, batting on 4 off 16 balls, tried to whack a wide one and ended up top-edging the ball to third man. It was a regulation catch, but Thisara Perera spilled it. The dropped catch would cost Sri Lanka 260 runs. It was not the only life Rohit got. Sachin Tendulkar becomes first cricketer in ODI history to score double hundred

India plod along: Rahane continued to hit boundaries at regular intervals, while Rohit continued to struggle. While Rahane was batting on 28 off 22 balls, Rohit was on 6 off 21 balls before he finally scored his first boundary. Rahane was out soon after, falling LBW to Angelo Mathews. New man Ambati Rayudu did not last long, getting bowled by Eranga for 8 off 19 balls. India were 59 for 2 after 13 overs. Rohit was batting on 20 off 35 balls at the time.

Rohit and Kohli light up Eden Gardens: The Indian skipper Kohli walked in at No. 4, and in his presence Rohit seemed to gain confidence. Perera was dispatched through point and Eranga was flicked over midwicket in the next couple of overs. Kohli and Rohit both got boundaries off Perera’s next over, but those were the last boundaries India scored for 7 overs. At the end of 16 overs, India had made 80 for the loss of 2 wickets.

Rohit and Kohli scored the runs in ones and twos over the next few overs. After 23 overs, India had amassed 103 without further loss, with Rohit closing in on his half-century and Kohli getting himself set. Rohit got his half-century off 72 balls with a single down the ground. Both men opened up after that, striking the occasional boundary to take India’s run rate past 5.

India decided to take the batting power play after 29 overs, with the score reading 153 for 2. Rohit, batting on 78 off 90 balls at the time, immediately opened up. Kulasekara was hit through point for four, whacked over midwicket for six, and then driven down the ground for another boundary to take Rohit into the 90s. Rohit Sharma s 209: Comparisons with Sachin Tendulkar and Virender Sehwag s double tons

Seekkuge Prasanna was then swept over square leg for six and to fine leg for four. Eranga was struck down the ground for four more. Mendis was hit for back-to-back boundaries, and Prasanna went for six and four again. Kohli was batting well at the other end and got to his half-century off 56 balls, but he was being completely overshadowed by Rohit. Soon Rohit hit Mathews through cover for his 19th boundary to bring up his 150 off 125 balls. He had taken 25 balls for his third fifty.

However, disaster struck in the same over. Kohli hit the ball to long on and set off for a single. There was some confusion between the two batsmen over a second run. Rohit ran to the danger end, but the throw came to Kohli’s end and he was run out. He walked off in a huff, and gave Rohit a look as we walked off. Nevertheless, the partnership had produced 202 runs in around 26 overs.

The Hitman gallops: Rohit was on 152 off 126 balls at the time of Kohli’s dismissal. Suresh Raina came in at No. 5 with India 261 for 3 in the 39th over. Raina hit Prasanna for a four and a six off successive balls but fell to Mathews in the next over for 11 off 5.

With the slog overs upon him, Rohit kicked things up a few notches higher. Mathews was slammed over midwicket for six, and in his next over was sent over long off for another one. Mendis, bowling the 44th over, was hit through cover, cow corner, and swept to square leg for three boundaries in three balls. The last ball of the over was cut for a fourth boundary. In the next over, Eranga was smashed down the ground to take Rohit to 197 off 150 balls. Kulasekara bowled the 46th, and Rohit got to his second ODI double ton off 151 balls with his 25th four. The next ball was sent to midwicket, where Prasanna dropped Rohit for the second time in the match. The ball went for another boundary, and by now Rohit could walk on a razor’s edge without suffering so much as a paper cut.

Eranga was hit for two fours and two sixes in the next over, but Rohit got his third life when Lahiru Thirimanne put down a tough chance. In the course of the over Rohit went past Virender Sehwag’s 219 to reach the highest ODI score. When Virender Sehwag broke Sachin Tendulkar s ODI record to score 219

Kulasekara was then dispatched for 3 fours and a six in the 48th over. Perera was smashed for four to give Rohit his 250 off 166 balls, before being hit for another six to end the over. Rohit hit one final four off Kulasekara to bring up India’s 400, but was dismissed off the final ball of the innings. Rohit s first 50 had taken him 72 balls. The next 50 took 28, then 25, 26, and finally 15. Rohit had scored 109 off his last 43 balls. The partnership between Rohit and Uthappa had produced 128 in less than 10 overs. Amazingly, Uthappa’s contribution was 16 off 16 balls in 48 minutes at the crease. Rohit hit a manic 264 off 173 balls with 33 fours and 9 sixes.

What followed: Sri Lanka vanished without a trace. Tillakaratne Dilshan (34), Mathews (75), and Thirimanne (59) tried to fight but they were never in with a realistic chance. Dhawal Kulkarni bowled beautifully to finish with 4 for 34. In the end, Sri Lanka were bowled out for a mere 251, which meant they lost to Rohit alone by 13 runs!

Mathews scored his maiden ODI century in the next match, making an unbeaten 139 to lead Sri Lanka to 286. Sadly for him, his innings was blunted by an unbeaten 139 from Kohli as India won by 3 wickets to seal a 5-0 whitewash over Sri Lanka. 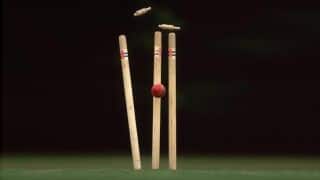 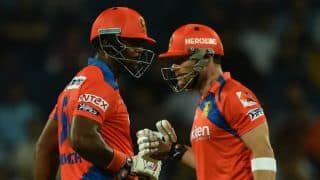