Pujara, Kohli and Rahane did it to good effect in South Africa and found success.

It’s true what the pundits say of Rohit Sharma. He bats with a nonchalance that’s bound to stoke envy in his contemporaries, but it’s the opposition that’s often spellbound trying to fathom how he manages to unearth an extra second, time and again, to play his shots, before that elegant follow-through pops in like a cherry on top of the cake. It’s also true that he’s capable of usurping records set by the greats of the game, and when George Bailey, Australia’s stand-in captain during the recent limited-overs series in India, stated that Rohit is one batsman who can fill the void left by Sachin Tendulkar, he wasn’t saying it loosely.

Rohit’s numbers in First-Class cricket are a testimony to his prowess in the arena. Like few other prodigies, he was a late bloomer on the big stage, but once he was thrust to the top of the order in One-Day Internationals (ODI) — a move that in the past has roused spirits and unleashed the competitive instincts of the players — it provided the impetus required to get his career rolling aptly. He began dictating terms and scored runs steadfastly, notching tons as though it were a habit. Quality of attack and placidity of the pitch notwithstanding, bagging a double-hundred in the overs-limit format of the game is not a feat that’s etched by the ordinary wrists that wield the willow.

At home, Rohit proved he was cut from a piece of cloth, one that was fit to pass through the scanners as Test material. His modus operandi at different junctures of the game — block when the opposition’s breathing down your neck, thwack when their chips are down, and to shield the tail in order to accumulate useful runs that could be decisive on the penultimate or final day of the match — were traits that highlighted his worth in the most valued format of the game. It was an experience that put him on the plane to South Africa.

Once there, Rohit’s predicaments resurfaced, this despite having technique, knowledge and ability embedded in just the right proportions. Perhaps due to shortage of preparation time — thanks to the commotion that ensued in the boardrooms of the Board of Control for Cricket in India (BCCI) and Cricket South Africa (CSA), just weeks before the commencement of the tour — none of the Indian players turned up mentally for the ODIs. Nevertheless, the Tests presented an even keel, and some of the Indian batsmen donned their tenacious cloak.

Cheteshwar Pujara, Virat Kohli and Ajinkya Rahane fared well in South Africa primarily because they’d managed to momentarily suppress their instinctive style of play. Good players certainly know which deliveries to leave alone, but, as stated by many a stalwart of the sport, the ability to cut down on your scoring shots at crucial points of the game, in order to eliminate a little risk, is one of the hallmarks of a dependable player. Of course, it is imperative to pounce on a bad delivery and instigate a shift in momentum, which is what the trio of Pujara, Kohli and Rahane notably did, too, but the way they curbed their natural instincts defined their performance during that series.

Rohit had batted similarly against the West Indies at home. In South Africa, though, he looked befuddled, yet again — he let go of the wrong delivery; the way he was bowled in the first innings of the Durban Test best sums up his tour. The prospect of facing Dale Steyn and Morne Morkel on a juicy turf is an intimidating one for the finest of batsmen, but the most touted to succeed returned forgettable scores. Steyn’s barrage of verbal taunts perhaps played a role in Rohit’s downfall in the second innings, but the latter was truly overwhelmed by then. The best he could have done, as Pommie Mbangwa suggested from the confines of the commentary box, was to not retort and grind his way to an 80 or a 90 instead. However, Rohit plunged into the contest and contributed to his own demise. Hopefully, it’s a lesson he’s absorbed. If, unlike Virat Kohli, you cannot blast through the bowlers on the back of a sledge, then it’s best to go the Rahul Dravid way: vex them with a big knock.

One bad series does not define a batsman or a bowler, but Rohit is too proficient a player to keep spilling chances. It’s often said that the difference between a good and a great sportsperson has a lot to do with what goes on inside the cranium. Perhaps temperament continues to remain an issue that thwarts Rohit from operating at his peak, but then, some of the greats have taken as long as seven to eight years to become attuned to the frequency which allows them to thrive. Rohit’s intermittent knocks have helped him cling on to a spot, albeit barely, but will he soar into the realms of the great in those white flannels? 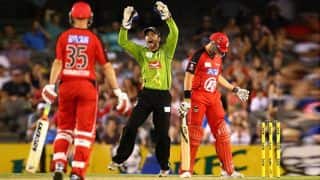