Rohit became the third batsman after Tendulkar and Sehwag to conquer the 200-run barrier in ODIs.

On November 2, 2013, Rohit Sharma entered the record books as he became the third batsman after Sachin Tendulkar and Virender Sehwag to conquer the 200-run barrier in a One-Day International (ODI) when he scored 209 in 158 balls against Australia at the M Chinnaswamy Stadium, Bangalore. Shiamak Unwalla looks back at the thrilling innings.

It took 39 years and 2,962 matches before Sachin Tendulkar scored the first ODI double century — 200 not out against South Africa. Since then Virender Sehwag hit 219 against West Indies in 2011, while Rohit Sharma achieved the landmark a couple of years later against Australia.

A nightmare series for bowlers: Australia toured India in 2013 for seven ODIs. The fourth match failed to produce a result while the fifth was washed out without a ball being bowled. But the five matches that were completed produced some absolutely mind-boggling performances. George Bailey, captaining Australia in Michael Clarke’s absence, scored 478 runs at an average of 95.6 — and he still wasn’t the highest scorer! With 491 runs at 122.75, that honour belonged to Rohit.

The first ODI was the most innocuous of the five. Australia batted first, piled on 304, and defended it comfortably to win by 72 runs.

Things took a drastic turn in the second match though; batting first, Australia rode on fifties from each of their top five batsmen to plunder a hapless Indian bowling attack for 359 runs.  In reply, Rohit hit an unbeaten 141, Shikhar Dhawan scored 95, and Virat Kohli pillaged a 52-ball unbeaten 100 as India romped home with as many as 39 balls to spare. Kohli’s knock went down in history as the fastest ODI ton by an Indian.

In the third ODI, chasing 304, Australia were then reduced to 213 for six in 41.1 overs, and needed 44 runs off the last three overs to win before James Faulkner tore into Ishant Sharma, clobbering the seamer for 30 runs in the ante-penultimate over to completely change the game.

After the fourth and fifth matches failed to yield a result, the sixth ODI again proved to be a batsman’s paradise. Shane Watson (102) and Bailey (156) made merry, as Australia scored 350. Rohit (79), Dhawan (100), and Kohli (115*) again were the stars as India chased down the total in the final over to square the series 2-2.

With the series poised firmly in the balance, the teams headed to Bangalore for the seventh and final encounter that would decide the fate of the series. For a change India batted first, with Rohit and Dhawan again opening the innings.

Clint McKay and Nathan Coulter-Nile opened the bowling, and Dhawan took charge right from the start, hitting McKay for three consecutive boundaries in the pacer’s second over. He then proceeded to smack Coulter-Nile for three more boundaries in the sixth over of the innings. By the end of the eighth over, India had scored 52 with Rohit on 17 off 29, and Dhawan on 29 off 19. Rohit was finding the boundaries, but also playing a lot of dot balls. He hit the first six of his innings when on 19 off 34 balls. There were to be 15 more after that.

Dhawan was dismissed off the final delivery of the 19th over for a typically belligerent 60 off 57 balls. Kohli suffered a rare failure as he was run out without scoring. Kohli, in a purple patch in the series, was livid and hurled a few expletives while walking back. Given the nature of wicket, he was probably already looking at a three-digit score. In some way, Rohit’s guilty face suggested that he was obliged to compensate for that loss and score a big one. Rohit brought up his half-century off 71 balls in the 24th over of the innings. So far it had been a strange knock, full of attractive boundaries but also a glut of dot balls.

Rohit opens up: The first sign of things to come came off the 28th over of the match. Xavier Doherty gave the ball some air only for Rohit to drive him back over his head for six. Two balls later, Doherty was deposited over long-on as Rohit hit two sixes off the over. Glenn Maxwell, bowling the next over, was given the same treatment: back-to-back sixes over long-on and mid-wicket. Rohit was on 85 off 87 balls at this point.

Rohit might have continued in the same vein, but quick dismissals of Suresh Raina and Yuvraj Singh urged him to slow down a bit. He finally got to his hundred off 114 balls, his next 50 coming off 43 balls.

At the end of the 38th over, India had scored 218 for four with Rohit batting on 101 off 116 deliveries, and Dhoni on five off eight balls. Rohit launched McKay over covers to bring up his seventh six. Two overs later, Rohit had a slice of luck: Faulkner bowled a short ball which Rohit pulled to Moises Henriques at deep midwicket, but the ball went straight through his hands and over the ropes. In the next over Clint McKay was sent over square leg as well, as Rohit reached 134 off 132 deliveries.

The final burst: India were now 283 for four in 45 overs, with Rohit batting on 142 off 138 balls and Dhoni on a 28-ball 29. McKay came on to bowl the 46th over, and Rohit greeted him with a heave that went to square leg for a boundary. The next ball was slashed through point for four more to bring up Rohit’s 150 off 140 balls. A rare dot ball was followed by another six — Rohit’s 10th — over square leg.

Rohit was now on 157 off 143 balls with four overs remaining. Bailey threw the ball to Doherty with the hope of restricting the runs. It would be a decision that would haunt him. The first ball was short, and was duly pulled over midwicket for six. The second was slashed through point for four. The third was a magical dot ball, but the fourth was a full toss that Rohit deposited about 10 rows back over long-on. The fifth delivery found the top-edge of Rohit’s sweep, but it carried for another boundary through square leg. The final ball was sent over long-on yet again to make it 26 runs off the over.

After 47 overs, India were 325 for four with Rohit on 183 off 149 and Dhoni on 30 off 29. By now, the 200, which was being discussed as a fantasy looked very much possible. Rohit faced just the one ball in the 48th over, which got him just a single, but Dhoni assaulted Faulkner to milk 20 off the over. Coulter-Nile came back to bowl the penultimate over, and started off with a full toss that Rohit slogged way over long-off for his 14th six to get to 190. He squeezed the next ball through point to pick up four more runs, as India jumped to 355.

It was time for the final over. The crowd was at the edge of their seats in anticipation. McKay came in to bowl with Rohit batting on 197 off 155 deliveries. The first ball was calmly driven over covers for six as Rohit became the third man — and third Indian — to get an ODI double ton. He almost seemed unaware of how to celebrate, as he raised his hands to his sides and looked toward the heavens with a slightly bemused and absolutely ecstatic smile on his face. He acknowledged the crowds and his teammates, each of whom wore a bright smile — even Kohli, who had been run out earlier due to Rohit’s blunder! He wasn’t done yet though, there was still one record that Rohit had to achieve. The next ball was sent over midwicket for Rohit’s 16th six, the record for the highest number of sixes in an ODI. He was out off the next ball, flicking one off his pads to the fielder at deep square leg, but by then the damage was well and truly done. Dhoni finished with a couple of boundaries as India ended their innings at 383 for six.

Stat: Rohit’s 16 sixes is the highest in an ODI innings surpassing Shane Watson’s 15 against Bangladesh set in 2011.

Australia were reduced to 74 for 4 before Glenn Maxwell went ballistic, hitting 60 off 22 balls with seven sixes before being dismissed. Shane Watson, batting at No. 8, continued from where Maxwell left off, smashing 49 off 22 balls with six sixes. However, he too was dismissed just when things were going well for the visitors. At 211 for eight, it seemed like it would be just a matter of time before India won.

But Faulkner had other ideas. He had already stolen a victory from India courtesy of his assault on Ishant in the third ODI, and he seemed intent on a repeat performance here as well. Faulkner thrashed the Indian bowling to all ends of the Chinnaswamy en route to a 73-ball 116. Unfortunately for him and Australia, it was not enough. He was the last man out as the innings ended at 326, with five overs still remaining as India won by 57 runs.

Vinay Kumar suffered the ignominy of being the first Indian to concede 100 runs in an ODI, as he finished with one for 102 in nine overs.  It remains his last ODI appearance for India at the time of writing. India won the series 3-2, with Rohit, Dhawan and Kohli’s figures significantly boosted at the end. 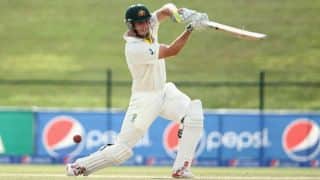