Rohit and Raina's ability is yet to mushroom in Tests, where they have only shone in a few outings.

Rohit Sharma and Suresh Raina are a very interesting juncture in their respective careers. While both batsmen have been fantastic in one-day cricket, they are yet to produce their best in the classical format. The Test series in Australia presents a very interesting setting for both batsmen and could have a bearing on their respective fortunes, writes Nishad Pai Vaidya.

Rohit Sharma and Suresh Raina have established themselves in limited-overs cricket with some breathtaking performances. Their attacking stroke-play has put them amongst the most exciting batsmen in world cricket. That talent and ability is yet to mushroom in Test cricket, where they have only shined in a few outings. The upcoming Test series in Australia could have a huge bearing on the duo s fortunes in white flannels.

Rohit s mind-boggling innings of 264 has put him in the spotlight again. For years, he was an enigma whose talent was obvious, but consistency eluded him. It was in 2013 that he hit a purple patch with some phenomenal consistency in ODIs. A Test debut followed, where he announced his arrival with back-to-back tons in his first two games. However, 2014 was a tough journey until the recent double-ton, which came on comeback after injury. Now, he faces an even bigger test as India head Down Under for a gruelling summer ahead.

Following those two tons in 2013, Rohit hasn t been effective in Tests. Barring one fifty in New Zealand, he has failed to produce the goods in other overseas tours. During the tour to England earlier this year, he was benched for four Tests and only managed a solitary game at Southampton. In South Africa and New Zealand, he played and missed numerous times as the bowlers tempted him outside the off-stump. His nonchalant manner looked good when it came off, but ugly when it didn t.

Some put it down to lack of temperament; some even blamed iffy technique outside the off-stump; however, Rohit can overcome those problems with tenacity. In some of his one-day innings, he has shown good character in tough conditions to battle it out in the middle. It was that tenacity that was evident during his recent double. Though he was dropped early in his innings, he made quick amends and played a largely controlled innings thereafter. Test cricket is a different ball-game of course, and Rohit has to show that application and intensity for a lot longer than 50 overs. Four years ago, Rohit was a part of the Test side on tour to Australia and warmed the bench. Virat Kohli won the race for the spot in the line-up and returned as India s best batsman. Rohit needs to do something similar to resurrect his Test career.

Competing with Rohit for a spot in the middle-order is Raina who is back in the Test squad after two years. The left-hander s technique against the short-ball has been suspect. He would get caught up in awkward positions and end up offering simple chances. In 2011, he had a nightmare in England as bowlers exploited his tentativeness outside the off-stump. There were always question marks over the possibility of him returning to Test cricket.

Following that ton against England in Cardiff his first ODI century outside the sub-continent Raina has given the team management hope that he can convert potential to performances in Test cricket. Here is a phenomenally talented left-hander, whose only flaw prevented him from succeeding in Tests. During that knock in Cardiff, Raina pulled short balls with disdain and batted well in tough conditions. He has worked hard on his technique and seems more in control of his game now. Ravi Shastri, the team director, supported his cause for a chance in the Test side following his recent good-run.

However, Raina faces challenges of his own. He hasn t played a First-Class match since the first week of January. Plus, there is a difference between attacking a short ball and defending it. In one-day cricket, you can counter the bowler s chin music with an attacking intent. In Test cricket, you need to have a defensive acumen to back that attacking instinct. It remains to be seen if Raina has developed that aspect of his game to suit the needs of Test cricket. The faster surfaces in Australia would test him if he is included in the Test side.

Then there is a Naman Ojha, who has been selected after some consistent performances with the bat. During the India A tour to Australia earlier this year, he was in brilliant form and continued to plunder runs in domestic cricket. It was tough to ignore him as he also presents another option behind the stumps. He is an outside candidate for a spot in the middle order with the main tussle being between Rohit and Raina. The two practice games may play a huge role in making the final decision. 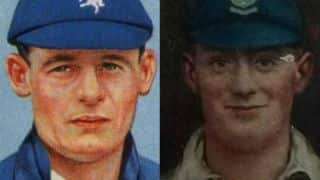