Rohit Sharma made his international debut in 2007 and is a key member of the Indian side.

Rohit Sharma is one of the faces symbolising the young Indian team. Not many know of Rohit s young days, where he had to overcome great odds to achieve his dream of playing for India. Nishad Pai Vaidya looks back at the making of Rohit, the batsman.

Our story begins in Mumbai, the financial capital of India, which is also its biggest cricketing centre. This is the city of dreams, where thousands land everyday from all corners of the country. People dream of making it big in Bollywood or getting a job to support their families. But, there is also a significant number in the city with cricketing dreams. A look around the maidans would reflect the story for scores of young man practice day in and day out with that one dream in mind. Only a few make it to the Mumbai team; breaking into the Indian side is the next step.

Many years ago, Rohit Sharma was one of those many boys searching for the dream. Today, he is seen as one of those young flashy cricketers, symbolising the irreverent youth of India. He is a millionaire, having achieved quite a few of his dreams. However, behind that is an interesting story that isn t often told. Young Rohit had to overcome great odds to realise his dream of playing at the highest level. That invariably involved sacrifices, hard work and a childhood that wasn t as normal as others.

Born to Purnima and Gurunath Sharma, Rohit grew up in a middle-class family, whose financial status wasn t quite stable. At a young age, he had to move away from his parents, who lived in Dombivali, a suburb that lies far north of Mumbai. He had to go and live with his uncle in Borivali, which is another Mumbai suburb, but is located on the main island of the city.

Speaking to DNA s Derek Abraham, Rohit s coach Dinesh Lad said, His parents were in Dombivli, but Rohit stayed away because his grandpa wanted it that way. He was the first grandson of the family. I noticed him at a local tournament in Borivali. It was his off-spin that caught the eye.

The boy had obvious talent with the willow. As a youngster, he attended a trial and was intimidated by the strong number of people that turned up. Instead of backing himself with the bat, his strongest suit, Rohit honed his off-spin. It was only later that Lad recognised his talent and mentored him ever since. Not to forget the role of his school Swami Vivekandanda International School.

Rohit s parents were not in a situation to get him admitted to the school; to make matters worse, his father did not have a job. But the school authorities waived his fees in view of his cricketing talent. The boy did not disappoint for he is quite easily their most famous pupil today.

Having risen through the ranks, Rohit played for the India under-19 followed by India A and then the Mumbai Ranji Team. At the age of 20, in 2007, he was called up for the senior side, making his one-day debut against Ireland. However, his first big moment came during the ICC World T20 2007, when he scored a match-winning fifty against South Africa in seaming conditions.

His father watched with pride as he finished the Indian innings with a six. “For me the six which Rohit hit was the best moment of my life, Gurunath Sharma told Rediff in 2007. Greater things waited for the young man!

Eight years down the line, Rohit has established himself in the Indian team. Although he took time to find his feet at the highest level, leaving him subject to copious mocking on the social media, he has now found his own consistently. His silken touch and lazy elegance is often misinterpreted as carelessness, his body language is often termed casual. But, behind that is the story of a young boy who believed and has done what many in the country only dream of! 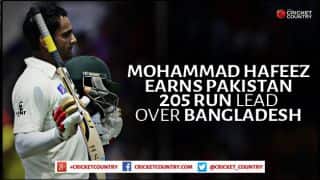