Rohit Sharma has now slammed 45 sixes in a calendar year, the most by an Indian.

Rohit Sharma had a poor start to his tenure as Indian captain. He had scored 2 on captaincy debut at Dharamsala. However, he more than made up for it in the next match, blasting his way to a 153-ball 208 not out with 13 fours and 12 sixes. After scoring his first hundred in 115 balls, he raced to the second in a mere a mere 36. The Sri Lankan bowling attack fell apart as Rohit, supported by Shreyas Iyer for a substantial part of the innings, marched on to score his third ODI hundred. Here is a list of records he broke along his way.

3 List A double-hundreds by Rohit Sharma, more than anyone else. Rohit went past Ali Brown, who has done it twice. However, while Brown s double-hundreds came in domestic matches, all 3 of Rohit s innings came in ODIs.

6 ODI hundreds for Rohit in 2017, the joint-most by anyone. Virat Kohli has also hit 6, while nobody else has even 5.

0 ODI scores higher than Rohit s 208* at Mohali. Rohit improved on Kohli s existing record of 154* by a substantial margin.

12 hundred-run partnerships between Rohit and Shikhar Dhawan. Of Indians, only Sourav Ganguly and Tendulkar (26) and Sehwag and Tendulkar (13) have more.

328 runs added by India for their first two partnerships (Rohit, with Dhawan and Iyer). This is the 3rd-highest in Indian history, bettered against Australia at Jaipur in 2013-14 (362, by Rohit, Dhawan, and Kohli) and against New Zealand (341, by Ganguly, Tendulkar, and Rahul Dravid) at Hyderabad in 1999-00. This is also the 9th-most in history.

1 instance of an Indian being a part of a double-hundred stand and a hundred-stand in the same ODI. Rohit himself had added 202 with Kohli and 128 with Robin Uthappa during his 264 at Kolkata in 2014-15. Today he added 115 with Dhawan and 213 with Iyer.

106 runs conceded by Nuwan Pradeep today, the most conceded by a Sri Lankan in an ODI. The record was previously held by Muttiah Muralitharan (10-0-99-0) against Australia at Sydney in 2005-06.

100th time India have breached the 300-mark in ODIs. The first time they did so was against Pakistan, at Sharjah in 1996. 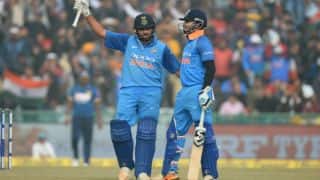 India register their 100th 300-plus score in ODIs