Rohit Sharma clobbered 264 off 173 balls in the fourth One-Day International (ODI) between India and Sri Lanka. Rohit now holds the record for the highest score in an ODI. Eden Gardens was in raptures as Rohit dazzled the park with his strokeplay. The fact that this innings came on his comeback makes it even more special. Nishad Pai Vaidya picks some of the key highlights of his magnificent innings.

Dropped early in the innings: Rohit Sharma was making a comeback to the Indian team after a few months out due to injury. He started his innings in a circumspect manner as Ajinkya Rahane did most of the scoring. In the fifth over, Rohit tried to go over the top, but got an edge to third-man. Thisara Perera positioned himself, watched it come through, and grassed it. It was quite embarrassing as Perera fell to the ground even as the ball bounced out of his grasp. Rohit was only on four at the time, which meant that the drop cost Sri Lanka as many as 260 runs. Astonishingly, that wasn’t even the last time he was dropped.

The slow fifty: Rohit got to his fifty off 72 balls with a quiet single in the 24th over. He was beginning to look good and had tried to get himself in zone then. India were merely knocking it around and he farmed the strike well in partnership with Virat Kohli. As it turned out, that was only the calm before a blazing storm.

The boundary that got him going: In the 25th over, Rohit smashed an Ajantha Mendis delivery over mid-off that went for a four. The fielders were in the ring and that gave Rohit the license to go over the top. It was from there on that he started attacking, and was on song thereafter. Though he got his first fifty off 72 balls, his second fifty off only 28, and completed a run-a-ball ton. Little did anyone know that he was not even half-way done at that point!

Nuwan Kulasekara clobbered: Nuwan Kulasekara had a forgettable day. In the 30th over, Rohit smashed him for two fours and a six to signal his true intentions. In nine overs, Kulasekara was massacred for 89 runs. Had he bowled one more over, he may well have completed his 100. Rohit completed his double ton off his bowling.

Indescribable six: A cricket writer is left short of words while describing this shot. In the 48th over, Rohit moved across his stumps with an intention of playing it through the leg-side. Kulasekara saw him moving, and reacted by bowling it wide outside the off-stump. Rohit merely scooped it towards the long-on region and it went for six!

Expensive overs at the death: Once Rohit got to his double ton in the 46th over, it was carnage. Overs 47 and 48 went for a total of 47 runs as the hapless Sri Lankan bowlers could do nothing but watch. In the 47th over, Rohit smashed two fours and two sixes. One of them was off a no-ball. It was during this over that he beat Virender Sehwag’s 219. In the 48th over, Rohit smashed three fours and a six. In the process, he passed Belinda Clarke’s 229 not out.

Partnership with Robin Uthappa: Towards the end, Robin Uthappa gave Rohit good support by working the strike around. He was happy to take a single and let Rohit take command over proceedings. Uthappa scored a run-a-ball 16, with one four. An astonishing stat is that Rohit and Uthappa shared a 128-run stand. Out of that, Uthappa scored only 16. That reflects Rohit’s dominance in the slog overs.

The acceleration: As mentioned earlier, Rohit got his fifty in 72 balls. It took him only 28 balls to get his next fifty. Thus, at that point, he had 100 runs in 100 balls. His next hundred came off only 51 balls. And he sprinted from 200 to 250 in only 15 balls. That was some entertainment towards the end.  In the last 10 overs, Rohit alone scored 110. 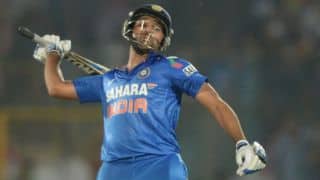