Vijay averages less than 20 in the 14 ODIs h has played for India.

With Rohit Sharma out with a fractured middle finger, India are without their first-choice One-Day International (ODI) opening batsman. His replacement in the side, Murali Vijay, was India’s most successful batsman in the Test series. Shiamak Unwalla looks at what this turn of events might mean for Vijay.

Murali Vijay has always been an ideal batsman for ODIs. He is blessed with strength, timing and the ability to play both swing and bounce fairly well. He was India’s reserve Test wicketkeeper for  a number of years before he sealed his spot at the top once the Virender Sehwag–Gautam Gambhir partnership ended.

In spite of his doubtless potential though, Vijay’s ODI record is rather underwhelming:

His figures seem to suggest that he has grossly under-performed in the limited chances he has got. However, the fact is that off the 13 innings in which he has batted (he did not bat in one match), he has got to double figures in 11 of them. This means that he has got starts virtually every time. His strike rate of 66.4 doesn’t tell the whole story either; he has twice scored at well over run-a-ball (25 off 16 against South Africa on debut, and 27 off 18 batting at No 6 against West Indies).

The fact that he has not been a regular member of the ODI squad has further compounded his troubles. In spite of his lacklustre figures, he is the ideal person to replace Rohit; like the man he is replacing, Vijay has the ability to start slow and absorb deliveries before cutting loose. The fact that Vijay has two Indian Premier League (IPL) hundreds proves that bringing out the big hits is not a problem for him.

It is understandable that Vijay has not played as much as he might have, given his poor figures. This opportunity might just be one of the last ones he gets, and it will now be up to Vijay to grab hold of it with both hands. If he can give a good showing of himself, there could well be a ticket to Australia and New Zealand for the ICC World Cup 2015 in the taking. 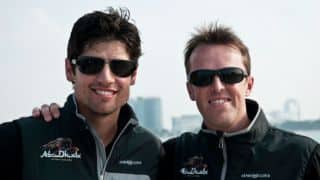 Graeme Swann says he is a huge supporter of Alastair Cook's captaincy in Tests, but not in ODIs

Graeme Swann says he is a huge supporter of Alastair Cook's captaincy in Tests, but not in ODIs