Ross Gregory was dismissed for the last time in his Test career on February 27, 1937. Abhishek Mukherjee looks at the execution of an Australian miracle on the same that was marred by the dark significance of a dismissal.

At the MCG in 1936-37 Australia completed one of the most amazing turnarounds in the history of Test cricket by winning the series 3-2 after being down 0-2 — the only such occasion that such an amazing feat has been accomplished.

England had began in spectacular style as Australia got a sound 322-run thrashing at The Gabba; after Maurice Leyland had set up a platform with his 126 Bill Voce and Gubby Allen bowled out Australia for 58 in the fourth innings and shared 18 wickets between them.

The Sydney victory was an even more emphatic one. Wally Hammond scored 231 before Voce and Allen were at it again, bowling out the hosts for 80. Hammond himself came to the party as the Australians were crushed by an innings; they could take only six English wickets in the Test.

In the third Test at Melbourne, Don Bradman declared the innings closed at 200 or 9, and caught England on a ‘sticky’ without any Jack Hobbs or Herbert Sutcliffe to save them England went from 56 for 2 to 76 for 9 when Allen declared 124 runs behind. Bradman then reversed the batting line-up, came out himself at 97 for 5, scored 270, and added 346 with Jack Fingleton before ‘Chuck’ Fleetwood-Smith led Australia to a 365-run triumph. Bradman’s innings turned the entire series on the balance.

The Australians had found their rhythm now. Despite England’s 42-run lead at Adelaide they were kept out by a Bradman 212 before they succumbed to Fleetwood-Smith yet again. This time they lost by 148 runs.

The teams were levelled 2-2 when they moved to MCG for the final Test. Bradman won the toss and scored a 191-ball 169 while Stan McCabe got a 155-ball 112. Jack Badcock also joined in the fun with a 223-ball 118 and after he left Ross Gregory approached his maiden Test century, having scored 23 and 50 in the previous Test.

It was not to happen: when on a composed 181-ball 80 he gave a catch to Hedley Verity off Ken Farnes, who accepted it. Gregory walked back; he would not play another Test. Australia finished shortly afterwards, ‘collapsing’ from 544 for 6 to 604.

There was no resistance from the Englishmen against Bill O’Reilly’s wiles. O’Reilly picked up 8 for 109, and that was that. England lost the Test by an innings and 200 runs and could not regain the Ashes: they would not have a right to the hallowed urn in another 17 years.

World War II broke out in a few years’ time and most English and Australian cricketers had to register themselves for The War. The War claimed many lives, including those of several cricketers. Three of these were Pilot Officer Ken Farnes, who died in an accident while flying over Chipping-Warden, Oxfordshire on October 20, 1941; Sergeant-Observer Ross Gregory, who was killed on active service near Ghafargaon, Assam on June 10, 1942; and Captain Hedley Verity, who succumbed to wounds from a battle in Sicily and passed away at Caserta on July 31, 1943.

(Abhishek Mukherjee is a cricket historian and Senior Cricket Writer at CricketCountry. He generally looks upon life as a journey involving two components – cricket and literature – though not as disjoint elements. A passionate follower of the history of the sport with an insatiable appetite for trivia and anecdotes, he has also a steady love affair with the incredible assortment of numbers that cricket has to offer. He also thinks he can bowl decent leg-breaks in street cricket, and blogs at http://ovshake.blogspot.in. He can be followed on Twitter at http://www.twitter.com/ovshake42 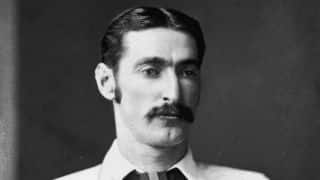