Ross Taylor proves that attack is the best form of defence

Ross Taylor proves that attack is the best form of defence

With his team written off and the Indians looking for another dominating performance, Ross Taylor produced an innings that broke the shackles and that sent a strong message. Leaving behind the ghosts of the thumping defeat at Hyderabad, Taylor lived up to his promise of attacking the Indian spinners and denying them the opportunity to get on top. 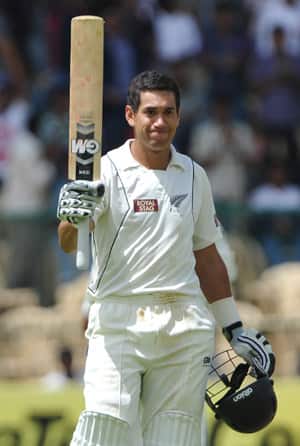 Ross Taylor on day one came out all guns blazing and took it to the opposition. With his belligerent strokeplay, he put India on the backfoot and had them thinking © AFP

“Two 100s in last 30 innings is not great, but I feel I am not far away from making runs” – New Zealand captain Ross Taylor before the Bangalore Test against India

With his team written off and the Indians looking for another dominating performance, Ross Taylor produced an innings that broke the shackles and that sent a strong message. Leaving behind the ghosts of the thumping defeat at Hyderabad, Taylor lived up to his promise of attacking the Indian spinners and denying them the opportunity to get on top. Such was the power of the performance that it lifted the unfancied hosts to a healthy first day score of 328 for six. Taylor may not have been at his best in Test cricket off late, but how prophetic were his words in the lead-up to the Bangalore Test!

It is often said that attack is the best form of defence and Taylor’s knock is ample evidence of it. Coming into this game on the back of the twin failures at Hyderabad, one may have expected him to be determined, yet cautious in his approach. Some may have felt that being watchful would have been the best way to go about things and tackling the tricks thrown by the Indian spinners. However, he came out all guns blazing and took it to the opposition. With his belligerent strokeplay, he put them on the backfoot and had them thinking.

Taylor was finding the gaps brilliantly and was in the mood of trying his luck. It was power cricket – most of the shots were played with a stamp of authority. Some of the cover drives and straight drives too had the element of dominance. The sweeps he played off the spinners were simply brilliant and threw their tactics a bit off-track. The knock showed how important it is for a captain to take the initiative. While he was going great guns at one end, the others could take a backseat and play themselves in at the other. Martin Guptill, Daniel Flynn and Kruger van Wyk made important contributions as well. Not to forget Doug Bracewell, who finished unbeaten on 30 at stumps.

Prior to this game, the curator at the Chinnaswamy Stadium had promised a sporting surface – one that would produce a good contest between bat and ball. Looking at the scoreline at the end of the first day’s play, one gets the feeling that there has been a fair balance – probably more in favour of the visitors. While Taylor’s hundred gave New Zealand the edge followed by van Wyk’s unbeaten fifty, Pragyan Ojha’s four wicket haul was a major factor in India keeping a relative check on the proceedings. Despite Mahendra Singh Dhoni’s desire for the home pitches to turn more, the Bangalore wicket wasn’t the easiest for his spinners.

Ojha was fantastic with his variations and has continued from where he left off at Hyderabad. He admitted that the conditions weren’t easy for the bowlers, but he wasn’t afraid to give the ball air and invite the batsman. Through Taylor’s carnage, he still managed to maintain a good economy rate and maintained control overall – although the New Zealand captain didn’t spare him either. In the end, he managed to fox Taylor – who attempted one sweep too many.

Zaheer Khan was fantastic upfront as he got the ball to move and troubled the batsmen. It isn’t often that India have won a Test without his contribution and the Hyderabad victory is that rare exception. The premier bowler was itching to make a mark and did it instantly by trapping Brendon McCullum leg before for a duck. He would have had Guptill early had Virat Kohli not dived across to a ball that was comfortably carrying to Suresh Raina at second slip. With the second new ball taken, Zaheer has to thwart the threatening partnership between Doug Bracewell and van Wyk. India shouldn’t let matters go out of hand and wrap up the tail soon.

Umesh Yadav and Ravichandran Ashwin couldn’t get their act together on the first day. Yadav in particular was too expensive and wayward. If his performance in Australia is anything to go by, the talent is obvious and he had the goods to be an effective strike-bowler. His pace is his biggest asset, but the control is missing. If he can get his thunderbolts in the right channels, he would undoubtedly be much more effective.

As one of the commentators pointed out, Ashwin struggles when the surface is good. On good tracks in Australia, he had a tough time and the one at Bangalore had the spike for the batsmen. He had a phenomenal time against the West Indies late last year and mauled the current visitors in the first Test. One mustn’t forget that they were all helpful surfaces and he capitalised on them. In comparison, Ojha looked more threatening in more batsman friendly conditions in Bangalore. Both Yadav and Ashwin would want to make amends on the second day and put up a good show in the next essay.

New Zealand’s charge has been heartening and makes it a very interesting contest. Such games are good for Test cricket and the one-sided affairs like the first Test simply kill the interest. The tourists have finally recorded a good day in the office. There are four more to go and they would know that there is a long road ahead. Will the determined Kiwi spirit last this test of time?