Ross Taylor was the first to admit that his team was tentative against the spinners. It’s no surprise that Taylor, who has been the side’s backbone since the last five years, once again managed to steer Kiwis out of troubled waters. 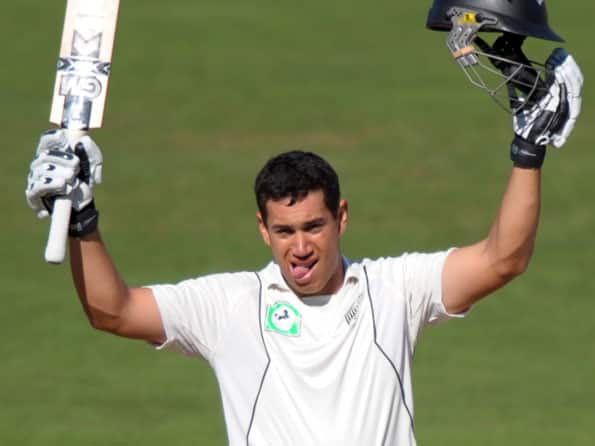 Ross Taylor is the only New Zealand batsman to have an average of over 40 since 2007. While this statistic reveals the fragility of the Kiwi batting line-up, it also shows that Taylor is the glue that holds this side together © AFP

It didn’t take long for the New Zealanders to recognise their shortcomings after they were beaten comprehensively in the first Test by an Indian side that was always going to be a force to reckon with in home conditions. Ross Taylor was the first to admit that his team was tentative against the spinners, and that it was more of a mental thing than a technical deficiency. The problem was spotted, but the visitors needed someone in their line-up to go out there and prove by actions that spin could indeed be tackled head on. After the end of first day’s play on Friday, they eventually found that man. It’s no surprise that Taylor, who has been the side’s backbone since the last five years, once again managed to steer New Zealand out of troubled waters.

Not only has Taylor held his forte in the limited-overs format, he continues to be an asset in the Test arena as well. What’s commendable about him is that he hasn’t let injuries peg him back. When he resumed playing in the West Indies a few months ago, it appeared as though his sublime form had never eluded him. One can only imagine New Zealand’s plight had he not featured in the batting line-up. Brendon McCullum is the only other player who has posed a threat apart from Taylor, but the former too has run out of steam in the last one year. It’s possible that without Taylor’s contributions since last August, New Zealand could have hit rock-bottom.

Below are the statistics of New Zealand’s top four batsmen in Tests since the last one year:

Except Taylor, none of the other batsmen have averages that make them stand apart. Had McCullum been among the runs, it would have certainly bolstered New Zealand’s batting attack. His decline in the Test arena began during recent times. Prior to that, if the statistics of the last two years are taken into account, then McCullum leads the list featuring New Zealand’s top run-getters. He averaged 58.55 between 2010 and 2011, and that average has fallen sharply to 29.78 for the period between 2011 and 2012.

Taylor is the only Kiwi batsman who has consistently stayed afloat, at least since the last five years. There have been times when he eventually did hit a lean patch, but that didn’t last long. One of New Zealand batting’s strongest pillars, Taylor has often shouldered responsibility, and that came to light as he went about breaking the shackles in the ongoing second Test. That attitude is perhaps the reason why he’s been New Zealand’s best batsman since the last five years.

Statistics of New Zealand’s batsmen since the last five years:

Taylor’s the only batsman to have an average of over 40 since 2007. While this statistic reveals the fragility of the Kiwi batting line-up, it also shows that Taylor is the glue that holds this side together.

A strike-rate of almost 89 is considered excellent by the standards of One-Day Internationals (ODI), and to come up with such a strong performance on turning Indian wickets in Tests, especially after a debacle in the first Test, speaks volumes of the man’s character. The positivity with which he approached his innings seemed to rub off on the duo of Kruger van Wyk and Doug Bracewell as well.

New Zealand needed someone from its ranks to stand up and send across a strong message to the Indian contingent. It’s not easy to put on a bold front, especially when you’ve been outplayed in the earlier game. Taylor’s innings may just be the shot in the arm the Kiwis so desperately needed. They now have an opportunity to post a total in excess of 400, and once that happens, they have bowlers who can pack a punch. The foundation has been laid and it remains to be seen if the Kiwis can indeed capitalise on it and pave their way to a famous victory.