One of the most popular teams in the IPL, RCB have been the perennial underachievers. They have assembled their most balanced side in ten editions. And that has happened despite letting go of their best player Chris Gayle.

Ten seasons. Three finals. The most talked-about franchise. Unfortunately, no silverware. Despite that, the buzz and excitement around Royal Challengers Bangalore (RCB) prevails. One of the most popular teams in the IPL, RCB have been the perennial underachievers. To their credit, they have assembled their most balanced side in ten editions. And that has happened despite letting go of their best player Chris Gayle.

Unlike many of the sides this season, RCB hasn t seen the change of guards. Virat Kohli continues to lead and the batting ethos remains the same. We have seen RCB gleefully put 200 on the board; and then, by the final strategic timeout of the match, Kohli is seen running around, scratching his head, struggling to defend a mountain reduced to a molehill in no time. RCB, in this season, have addressed that.

Trivia: In IPL 2017, RCB were bowled out for the tournaments record low score of 49, against Kolkata Knight Riders (KKR). Nathan Coulter-Nile, Umesh Yadav, Chris Woakes and Colin de Grandhomme picked 3, 1, 3 and 3 wickets respectively for KKR. Interestingly, RCB s shopping cart in IPL 2018 Auction had all four of their tormentors.

RCB had expectedly retained Kohli and AB de Villiers. Yuzvendra Chahal was surprisingly not retained. They went for Sarfaraz Khan instead. Sarfraz had played a handful of games in 2016 and was out of the 2017 edition due to injury. Of course, they used their Right-to-Match (RTM) cards on Chahal and Pawan Negi.

RCB, over the years

*Shane Watson led in the first three matches as Kohli was out due to an injury.

Note the inconsistency. In the last four seasons, RCB have finished second-last, third, second and last. A strong batting armoury often did the trick, but the feeble bowling let them down every now and then, and they got mowed over when the willow-wielders had their off days.

Did they read my pre-auction article before going into the auction? It doesn t matter. Brendon McCullum, Quinton de Kock, Chris Woakes and Umesh Yadav were some of my suggestions. All of them were added in RCB s shopping cart.

A SWOT analysis will further help us dive into the strengths and shortcomings of the RCB side this season.

Power-packed batting: Had Kohli been in South Africa for another week, he would have got 1,000 tour runs. With 4,418 runs, Kohli is 122 runs behind Suresh Raina and is the second-highest run-getter in IPL history. It won t be a surprise if he ends up topping the charts by the end of this season.

In Kohli and de Villiers, RCB have two of the best batters. Add McCullum and de Kock to the equation. It s the top-order, still. Wait. Inject the Punjabi flavour and there are Mandeep Singh and Manan Vohra. Probably, the former will have to be pushed to the middle-order.

Pavan Deshpande has been one of Karnataka s stars this season. His career T20 strike-rate reads 145.5, and that tags along an average of 67. They have another power-hitting local lad, Aniruddha Joshi. But then these men will only get to play if RCB look beyond Sarfaraz. Let us also not forget that they have Moeen Ali and Colin de Grandhomme.

Note: Ten years back, at the RCB den, M Chinnaswamy Stadium, McCullum, for Kolkata Knight Riders (KKR), McCullum set the tournament alight with his blistering century. He smashed RCB to pulp. In IPL 2018, McCullum will be in RCB reds, hoping to replicate the destruction. Coincidentally, they face KKR in their opening game.

Spin to win: Chahal and Washington Sundar were India s key to success in India s Nidahas Trophy triumph. The re-laid Bengaluru surface isn t what it used to be. If the track continues to be slow and slugging like what it was in the 2017 edition, RCB have good exploiters of it.

Chahal will lead the spin attack. He will be aided by the guile of the teenager Sundar, who doesn t turn the ball a lot but uses his height, trajectory and length variations to his advantage. The two fantastic spinners give them a profound edge. Additionally, they have a quality left-arm spinner in Negi.

Trivia: RCB used their RTM for Negi for a reason. The likes of Chahal and Sundar may overshadow him but Negi was their best bowler last season. He picked 16 wickets from 12 matches at 12.31 and an incredible economy rate of 6.12, which is two more wickets than Chahal in one lesser match and a far better economy rate.

Moeen Ali isn t a bad off-spinner to have in your armoury in this format. There is leg-spinner Murugan Ashwin too.

Good all-rounders: RCB have horses for courses. Moeen, de Grandhomme and Woakes are useful all-rounders. Corey Anderson, their latest recruit, is handy as well. Sundar, primarily an off-spinner, averages over 31 in First-Class cricket. Then there is Negi, a dynamite down the order.

Lack of pace zing: Woakes is a quality pacer, but that is about it. Coulter-Nile s injury is a huge setback for RCB. Anderson, his replacement, is Corey, not James. Corey is more of a batting all-rounder and has done little of note with the ball in T20s.

Umesh is the other big name. He is experienced and quick but can be wayward. His T20 record is far from impressive and in IPL, he has 91 wickets from 94 matches at an average almost touching 30 and he goes at 8.39 an over.

De Grandhomme isn t express but RCB have managed to put together a bunch of decent domestic pacers in Mohammed Siraj, Kulwant Khejroliya, Aniket Choudhary and Navdeep Saini. How the lot handles big match pressure will go on to play a decisive part in RCB s success.

Tim Southee will get games only if Woakes form falls. Southee and Woakes could have been a formidable pair but RCB can t afford that luxury given the overseas cap. But in conditions suited for pace, it s something they will ponder about.

Kohli s captaincy numbers: RCB carry the tag of chokers and underachievers . There is no pride in it. Kohli has a phenomenal win-loss ratio as Indian captain but the number takes a dip for RCB. Only three captains have led RCB in more than 20 matches and Kohli has the worst win percentage among them: Anil Kumble won 57.7% of his games and Daniel Vettori 54.5%; Kohli, from the 82 games that he has captained, has won 38 and lost 39, which pulls his win percentage below fifty. That number will have to soar for RCB s title chance.

Title win: This is Kohli-AB s best chance to win the tournament. David Warner and Steven Smith s bans have been major setbacks for the respective franchises. Most of the opponents have seen a change of guard; and both Chennai Super Kings and Rajasthan Royals last played in 2015. RCB have the experience and players who have done well in recent times. This is their best opportunity to the title shot

Powerplay and death experts: Remember the Sunil Narine-Chris Lynn carnage in Bengaluru last year? The duo put up an opening stand of 105 in 6 overs. Will it be the case with Sundar and Woakes around? In them, RCB have solid containers. Chahal too can bowl up front and even if he goes for runs, he will get you the key wickets.

Overseas-local balance: Vohra displayed good form last year, but will he get to start? If he does then either McCullum or de Kock will have to sit out. Woakes is a certain starter and if both McCullum and de Kock play then with AB around, it closes the slot of the foreign all-rounder. Moeen, de Grandhomme and Anderson, contenders for the one all-rounder s slot, will all have to sit out. Considering Sarfaraz s lack of games and Sundar s inexperience with bat, can they afford that?

Inexperience pace-attack: Barring Umesh none of the pacers have enough IPL experience. Woakes definitely brings in his skill-set but that is about it. Siraj, Saini, Aniket and Khejroliya have done well in domestic cricket but IPL is a different kettle. They will surely be targeted.

If attack with the bat and spin is the mantra they adopt, and go for the kill, the XI will look like:

On the other hand, RCB start in Kolkata, which may not be a spin paradise. 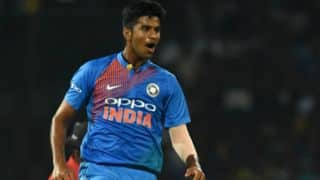 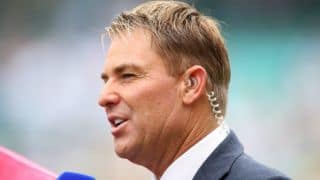