While Virat Kohli has been in the form of his life, R Ashwin has not come into his own yet.

Royal Challengers Bangalore (RCB) will lock horns with Rising Pune Supergiants (RPS) in Match 35 in the ninth edition of Indian Premier League (IPL) at Bengaluru’s Chinnaswamy Stadium. In the first encounter between these two teams, RCB edged past RPS by 13 runs, thanks to swaggering 155-run stand between Virat Kohli and AB de Villiers. Both batsmen went all guns blazing and took the RPS bowlers to the cleaners. Thus, RPS would be itching to avenge the loss and jump up in the points table. This battle will produce number of battles between the swaggering stars and set the roaring Bangalore on fire. Let’s walk through the key battles that are sure to brighten up your weekend: FULL CRICKET SCORECARD, Royal Challengers Bangalore vs Rising Pune Supergiants, IPL 2016, Match 35 at Bangalore

AB de Villiers vs Rajat Bhatia: De Villiers has amassed 320 runs in 7 matches, with two 8o-plus scores already to his name. Given Bhatia is the most economical bowler of IPL,  he’ll be handy to keep de Villiers’ onslaught at bay. He has scalped 6 wickets and conceded over 24 runs only twice. With his deceitful change of pace, de Villiers might find it difficult to score runs at will and keep the scoreboard ticking. However, if Bhatia becomes too predictable with his slower ones, de Villiers will leave no stone unturned to scythe him all over the ground.

Ajinkya Rahane vs Shane Watson: The only who hasn’t got injured and is consistently piling on runs is RPS’ elegant batsman Rahane. He has already plundered 5 half-centuries and is at 5th spot in the Orange Cap list. In the last match against RCB, he played a vital 60-run knock to keep the team on course. However, it was not enough to take his team over the line. On the other hand, Watson has been the highest-taker for RCB and the only bowler to provide impetus in crunch situation. With his knack of intelligently mixing it up, he’ll hold a key to dismiss Rahane in the batting Powerplay. Preview: MS Dhoni, Virat Kohli lead teams in crucial fixture

Virat Kohli vs R Ashwin: While one has been in the form of his life, the other has not come into his own yet. With 433 runs in just 7 matches, Kohli is the owner of the Orange Cap. Ashwin, on the other hand, failed not only to keep a lid on the runs but also take wickets in quick success. Nonetheless, Kohli likes to feed on off spinners and has faced Ashwin many a time in the nets. Both know each other’s strengths and weaknesses and will grab each other’s collar to put their teams in a commanding position.

Usman Khawaja vs Tabraiz Shamsi: After a number of injured foreign players being sent back, Khawaja was called to play his maiden IPL tournament. He has played only 1 match and scored a blistering 30 to give his team a flying start. Considering he’s a swashbuckling players against pace, Kohli is likely to introduce chinaman Shamsi early into the attack. Shamsi has been excellent in getting the better of the power-hitter. Whether he’ll contain Khawaja’s rampage or fall prey to his batting prowess, is a question only time can tell. 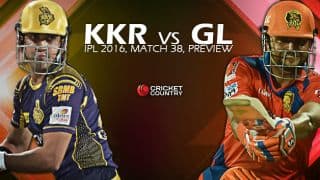