Season nine of Indian Premier League (IPL) is almost halfway through and it is Match No. 30 as Royal Challengers Bangalore (RCB) lock horns with Kolkata Knight Riders (KKR) in the M Chinnaswamy Stadium, Bangalore. This is the first time the two teams will face each other in this season. KKR are surely in a better position currently as they are in the fourth position in the table, winning four of their seven matches. RCB, on the other hand, has won only two matches and are positioned second from last. RCB has always been a batting heavy side but the bowling of the side has been a weak factor for them. The team with this game, will look to find a permanent solution to the lacks in their bowling line up. Here is the likely XI for RCB that skipper Virat Kohli might go with. FULL CRICKET SCORECARD: Royal Challengers Bangalore vs Kolkata Knight Riders, IPL 2016, Match 30 at Bengaluru

Top-order: The best part of the team line-up of RCB is their top-order that consists of biggest names if the Twenty20 (T20) format across the world. Chris Gayle, who was away for the birth of his first baby, is all set to make a comeback to the side and is likely to open the batting. While, in the past few matches, Kohli himself was seen going out to open, with Gayle back in the side, he might sent Shane Watson up the order and himself come at No. 3. With three powerful batsman up the order, the top-order looks strong.

Middle-order: It is AB de Villiers who come out bat at No. 4 to carry forward the momentum provided by the packed top-order. De Villiers, who has won RCB many matches season after season, has been in a tremendous form in this season as well, building up five consecutive 50-run partnership with the captain. Coming in next would be the in-form KL Rahul who scored a quick half-century in the last match, will look to continue this form. Coming in next should be India’s young sensation Sarafaz Khan who in all likelihood be replacing Sachin Baby . Khan has been in good hitting form for RCB off-late. Staurt Binny will take over the responsibility of a pinch hitter and a seam up bowler.

Lower Order:  Chris Jordan introduction will help the team a lot  as RCB have suffered from due to their inaccurate bowling a lot. Varun Aaron who bowled well in the last Sunrisers Hyderabad will hope to continue his form with the ball as well. Spinning responsibilities will be taken over by Yuzvendra Chahal and Iqbal Abdulla. Chahal has been the most dependent spinner for RCB in the recent past, while Abdulla has been most inconsistent with his place in the team, will want to prove his critics wrong. 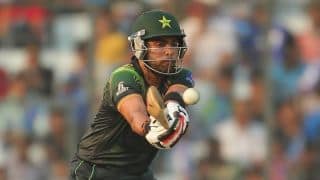