The son of a bank employee in Bombay, Jamshedji did not study beyond matriculation.

Rustomji Jamshedji Dorabji Jamshedji was 41 years 27 days old when he made his debut against England in the Bombay Gymkhana Test of 1933-34. It was the first Test on Indian soil, and the first Test in history that included cricket on Sunday.

The only others to make Test debuts after 40 are Archie Wiles, Omar Henry, Septimus Kinneir, Harry Lee, Geoff Chubb, and Ramaswami.

Standing at 5 8 , Jamshedji tossed the ball up to batsmen uninhibitedly. He made his First-Class debut at 30, but struck immediately, routing Europeans in the 1922-23 Quadrangular semi-final: he took 7 for 85. In the final he claimed 4 for 61 and 7 for 61.

Jamshedji made his debut alongside Ramji and LP Jai, and those two future greats of Indian cricket, Merchant and Amarnath. He remained unbeaten in both innings, scoring 4 and 1. He bowled only once in the Test, returning figures of 35-4-137-3. His wickets included Charlie Barnett, Leslie Townsend, and Bryan Valentine.

He continued to play First-Class cricket till he was 46. Only 29 of his matches (spanned over 16 years) were given First-Class status. He claimed 134 wickets at 22.12.

The son of a bank employee in Bombay, Jamshedji did not study beyond matriculation. He worked as a clerk in Bombay Dyeing, a job he continued with after his playing days. He passed away on April 5, 1976. 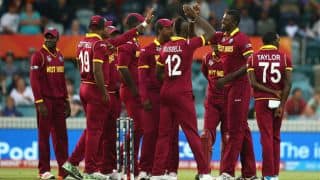 WICB to be renamed Cricket West Indies; business affairs to be handled by separate wing South Africa have nothing to take away from washed out 2nd Test vs India, admits Hashim Amla