Ryan Hinds was tipped to sparkle in the international circuit with his all-round skills.

Ryan Hinds, born on February 17, 1981 was tipped to sparkle in the international circuit with his all-round skills, but it wasn’t to be. Bharath Ramaraj has a sneak peek into his career.

It has been a long time since a 17-year-old Ryan Hinds played for Barbados in the Commonwealth games in Malaysia in 1998. It was then reckoned by the Caribbean cricket cognoscenti that he can be a symbol of calmness and stability in West Indies’ middle-order, in the years to come. Such was the genuine hope Hinds gave with his twinkling potential that Desmond Haynes, the former great West Indian opening batsman gushed at his incredible talent and even went onto say that he had the best technique going around in the Caribbean.

Unfortunately, 16 years later in 2014, from being hailed as a volcanic burst of freshness and the successor to the past greats from the Caribbean, at the age of 33, Hinds is known as one of those innumerable cricketers from the West Indies to have flattered to deceive. Actually, disciplinary issues have acted as an impervious hurdle for him to climb up the ladder.

Even though Hinds made his mark in the Under-19 level, it took him a few seasons to crack the code in First-Class cricket. It was in 2001-02 season that the Barbadian found his bearings in West Indies’ First-Class competition.

As Hinds continued to wow the paying public by crisply leaning into his drives, twinned with showcasing an iron-clad technique, there were calls for him to be selected in the West Indies setup. The gleam and glow in his batsmanship was clearly evident in 2001-02 when he made his much awaited Test debut against Pakistan at Sharjah. West Indies, who were already on a spiraling downhill path, lost the game by a huge margin. In a match where West Indies dropped catch after catch and fielded lethargically, Hinds was one of the few who stood toe-to-toe against the Pakistan line-up.

Up against a formidable pace attack made up of Shoaib Akhtar, Waqar Younis and Abdul Razzaq, who were all reversing the old ball considerably, Hinds went about his job of calmly threading through minute gaps with poise and needlepoint precision. Those flowing drives and flicks must have given plenty of heart to long suffering Caribbean cricket lovers. He also was one of the few who looked like was striving every ounce of his energy in the field.

However, the left-handed batsman found himself in and out of the West Indies’ squad and essayed only one more fifty in his Test career. It came against England in tough conditions against a formidable pace attack consisting of Simon Jones, Steve Harmison, Matthew Hoggard and Andrew Flintoff at Kingston, Jamaica in 2004. In a match where Harmison blew away West Indies in the second innings with a spell of seven for 12, Hinds’s knock was the lone bright spots for them.

After playing in 15 Tests, he averages a disappointing 21.04 with the bat. Even in One-Day Internationals (ODIs), he has been well below by amassing 101 runs at an average of 16.83. Hinds is also a useful left-arm spin bowler with a good arm ball in his repertoire. But most of his success as a spinner has come in the domestic circuit. In 120 First-Class matches, he has snared 227 wickets at an average of 27.34

Ryan Hinds last played a First-Class game back in 2011-02 season for Barbados against Guyana in a four-day match. The simple truth is at the age of just 33, he already finds himself at the autumn of his career.

Hinds has been dogged by disciplinary issues. In 2007, he showed bad behavior towards the standing umpire in a regional game against Trinidad and Tobago. Former West Indies wicketkeeper Deryck Murray came down very hard on his behaviour. In 2012, yet another nail was clamped in the coffin when he was accused and arrested in a rape case. Hinds was left on bail for 7,500 Barbados dollars with a surety. It was believed that he was suffering from frustration and depression. Hinds appeared before Magistrate Laurie-Ann Smith-Bovell and it was reported by local media as, “He was ordered to surrender his passport and must report to the Holetown Police Station once per week as the other conditions of his bail.”

From being touted as the future bedrock of West Indies’ line-up, Ryan Hinds now finds himself in a wallow of depression and sheer frustration. It has been a sad tale of another West Indian cricketer known for playing a riveting game who has disappeared into the oblivion. 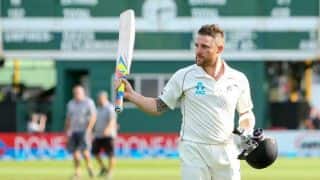