Ryan Sidebottom's career highlights would be his Test hat-trick and the World T20 triumph.

Ryan Sidebottom, born on Jan 15, 1978 wasn’t gift wrapped with heavy dollops of burgeoning talent. But he bowled with a great heart in County cricket and for England, and carved out a fine career for himself. Bharath Ramaraj has more…

Back in 1998, in the middle of a typical quintessential English summer, painted with lush green woodlands, Yorkshire was taking on Durham.  With the peace and tranquility surrounding the Riverside ground, both teams went hammer and tongs at each with no quarter given from anyone. The Yorkshire attack consisted of young bowlers who charged into the crease with bubbly enthusiasm. Mathew Hoggard, the wiry Paul Hutchison (in 1997, he topped County bowling charts) and a curly haired, 19-year old left-arm swing bowler with a curious name, Ryan Sidebottom. By spending every ounce of their energy, they took seven wickets between them to end the dogged resistance of Durham.

Ryan Sidebottom, son of former Yorkshire and England pacer Arnie Sidebottom, who incidentally also played second division football was your typical quickie from the White Roses County. He didn’t bowl with express pace and many times, it seemed like he was huffing and puffing his way to the crease to deliver the ball. But unmistakably, no one could question his insatiable hunger to bowl long spells with a great heart. It was a testament to his sheer never-say-die attitude that he was able to script a memorable comeback to the England setup in 2007, after finding himself in a trench of wilderness for most part of 2000s.

When Sidebottom made his Test debut against Pakistan in 2001 at Lord’s, he must have looked forward to a long career with the England team. However, the troika of experienced pacers in Andrew Caddick, Dominic Cork and Darren Gough blew away the Pakistan batting line-up twice to take England to a fine Test win and that too by an innings. Sidebottom seemed more like a passenger in that Test who was picked to make up the numbers. It wasn’t his fault though, that the rest of England’s pace attack used the seaming conditions to their advantage. For the next half a dozen years, it seemed like he would go down into the annals of cricket with a footnote of father-son combination having played just a single Test each.

Actually, by the end of the 2003 First-Class season, Sidebottom even left White Roses County to join Nottinghamshire. Surprisingly, he had a wonderful season for them that year, and in terms of First-Class bowling averages, he touched noteworthy crusts by finishing fifth. It remained a mystery however, as to how could the Yorkshire think-tank in the middle of a wretched season, overlook one of their ultra-consistent performers for few of the matches.

By then, Steven Harmison, Simon Jones, Mathew Hoggard and Andrew Flintoff were leaving no stone unturned in their efforts to skittle opposition line-ups for cheap scores. Waiting in the wings were James Anderson, Liam Plunkett, Sajid Mahmood and Chris Tremlett. So, Sidebottom had to plough through playing County cricket with little hope of making it into the England side. He consistently took wickets for Nottinghamshire on some helpful tracks which made his detractors opine that he was your English seamer who thrives on seaming decks. It didn’t help his cause that Duncan Fletcher always plumped for raw pace over control.

It was only after Fletcher left the scene that it opened the flood gates for Sidebottom to essay a comeback. Before the Test match against the West Indies at Sidebottom’s old home-ground Leeds in 2007, England found themselves in a mini crisis. Hoggard and Flintoff were sidelined by untimely injuries. Harmison was bereft of any confidence and Plunkett was all over the shop. It forced Sidebottom’s former teammate at Yorkshire and then England captain Michael Vaughan, along with coach Peter Moores to pick Sidebottom from the world of wilderness. There was a clear change in strategy under Moores’s regime with County performances being given more weightage than raw talent.

Sidebottom proved to be an able ally for Vaughan in the next 12 months. In his comeback Test itself, he took eight wickets though, it came against a ravaged West Indies side in perfect conditions for seam bowling. He followed it up with a five-for at Chester-le-Street in the final Test of the series.

Yes, he found life more difficult against a better batting line-up in India that year on good tracks for batting. In his defence, England wicketkeeper Matt Prior seemed to have problems in picking the left armer’s angle across the right-handed batsman, resulting in a few drop catches. The pattern followed in the series in Sri Lanka when Prior again lost the plot while keeping to the left armer. To an extent, it has to be said that a few of his supporters at Yorkshire exaggerate the number of times Prior let the swing bowler down. But he definitely would have had a few more wickets to his kitty, if Prior had taken most of those chances.

Sidebottom was clearly at the peak of his prowess in New Zealand in 2008. With Anderson wafting between being brilliant to shoddy performances, Sidebottom led the attack admirably by taking as many as 24 wickets at the cost of 17.08. New Zealand batsmen didn’t help their cause by gifting him a few of those wickets. But 24 wickets over a three-Test series is a fantastic achievement indeed. He even took a hat-trick in that series. On New Zealand’s return leg tour to England, he proved to be yet again a thorn in their flesh by picking up a bucketful of wickets.

However, his limitations were exposed when South Africa’s mighty fine batting line-up made merry against his bowling. Unlike Anderson, who had re-emerged on the scene as England’s strike weapon, Sidebottom arguably swung it from the hand rather than late.

By the time England toured West Indies in 2009, he was clearly struggling for form and fitness, and was jettisoned from the team. He did play one more Test against South Africa at Wanderers in 2010 in place of Graham Onions. He should have got the wicket off Graeme Smith in that Test, but it was denied by the third umpire. From his perspective, it sadly turned out to be the last time he played for his country in Tests.

Sidebottom still played his part in England’s rather surprising Twenty20 (T20) 2010 World Cup triumph by bowling reasonably well in the end overs. Somewhat of a controversial choice, as he was picked ahead of Anderson at the start of the tournament, he proved to  be a vital cog in their famous triumph. It was a swansong for Sidebottom from internationals, as he never played another game for England.

By the end of August that year, the sun set on his international career with him announcing his retirement. He said, “If I look back on my international career, I have achieved more than I could ever have dreamed. I have had a truly fantastic period of my life with England. Winning the Twenty20 World Cup in the West Indies, my Test debut at Lords, a Test hat-trick against New Zealand, plus a Man of the Series award, are just a few of the highlights.”

During that time, he helped Nottinghamshire to a fabulous County Championship triumph. Sidebottom played a major role by taking the crucial wicket of Lancashire’s opener Karl Brown on the last day of the Championship in 2010 to help them garner just enough points to pip Somerset for the title. He decided to join his old County Yorkshire by the end of that year. Since joining Yorkshire, he has mentored young seamers and showed them the way to success. He has even extended his contract up till 2015 with them.

When he ran up to the crease to deliver the ball, Ryan Sidebottom looked more like a bull from the China shop. But make no mistake about the mettlesome seamer’s will power or fortitude to bowl with a heart of lion and stand toe-to-toe with the best in the business. 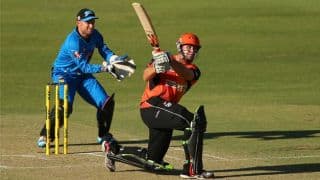