Ryan ten Doeschate displayed class by smashing 64 off 32 balls for the Otago Volts in his first Champions League Twenty20 2013 game on Wednesday against Kandurata Maroons. Prakash Govindasreenivasan describes the innings and explains why the Dutchman is a captain’s dream in the T20 format. Ryan ten Doeschate displayed class by smashing 64 off 32 balls for the Otago Volts in his first Champions League Twenty20 2013 game on Wednesday against Kandurata Maroons. Prakash Govindasreenivasan describes the innings and explains why the Dutchman is a captain’s dream in the T20 format.
With a casual run-up to bowl gentle medium pace and a small build that can be very deceptive, Ryan ten Doeschate is a busy cricketer. Wielding his bat with a good amount of power — to clear the longest boundaries — comes to him as effortlessly as does the smile that he tends to wear almost every time he steps on to the field.

On Wednesday, after a lot of contemplation and finally being released by Essex, Doeschate was flown in to India to help strengthen Otago Volts’s case in the qualifiers of the Champions League T20 (CLT20), 2013. And didn’t he deliver!

Otago had already won their first game against the Faisalabad Wolves and needed to get one over the Kandurata Maroons to almost confirm their place in the main draw of the tournament. Ten Doeschate landed in India and guided his side home with an exceptional all-round performance. He was first effective as he used the slow Indian conditions perfectly by taking the pace off the ball and deceiving the batsmen. He then came out to score a wonderfully paced half-century at a crucial juncture of the Otago innings.

The beauty of the shortest format of the game has been the manner in which a team goes about pacing its innings while chasing a tricky total. More often than not, a cautious start tends to extend too far and before a team realises the need for acceleration, wickets tumble and they lose their grip over the game. A T20 game can also be likened to a roller coaster ride. For once, you could be on an upward drive and spiralling downwards only a few minutes later.  To handle such situations, one always needs a player who can balance his game between aggression and poise. Ten Doeschate’s effortless ability to showcase both makes him a coveted player in the shorter formats of the game.

For a player averaging as much as 67 from the 33 One-Day Internationals (ODI), one wonders what he could have done had he played for a Test playing nation.

Yet, he seems quite content with plying his trade in different leagues across the world and take away something from each and add to his rich experience. From what can be seen of ten Doeschate across leagues and formats, it is safe say that the 33-year-old has a knack of adapting to conditions faster than anybody. Brendon McCullum tossed the ball to him with the hope of mixing things up and getting a breakthrough. Ten Doeschate struck right away in his first over when a slower one which plotted Dilhara Lokuhettige’s downfall. Ten Doeschate bowled only two overs in the game, giving away nine runs and picking up two wickets, second one being that of the Kandurata skipper Thirimanne. This wicket too was a result of a wily slower delivery that Thirimanne misread and went after. However, he failed to connect as well as he would have liked. Ten Doeschate was quick to evaluate the results of taking the pace off the ball and continued to bowl slow offcutters to frustrate the batsmen.

He bowled with a lot of guile, but his bigger contribution was to come with the bat. Having landed in India just hours before the match, Ten Doeschate would have been forgiven had he not bowled well. But, a good bowling performance had raised the  the expectations  by the time he walked out to bat. All of a sudden, Otago wanted to ignore the fact that he could have possibly been jet-lagged. He walked in to bat at a tricky situation and was expected to bail his side out, as he does often. And, the kind Dutchman obliged.

Having lost a couple of wickets, including that of skipper McCullum, Otago limped to 62 for two at the halfway stage and were facing an uphill task  of getting the remaining 93 from the second half of the innings. Ten Doeschate eased the pressure, and how!

After dealing in ones and twos early on in his innings, ten Doeschate plundered Kaushal Lokuarachchi for 19 runs in an over which brought Otago back in the game. He made his intentions clear when he danced down the track to slam one over long on. This move was enough to unsettle Lokuarachchi and the Sri Lankan spinner followed it up with a full delivery pitched marginally outside the off-stump. Doeschate displayed sheer power and timing when he managed to flick that ball over the deep midwicket boundary for another maximum. Having shattered the bowler’s confidence entirely, he then went down on one knee and slammed a flatter delivery over the same region to pick up his third consecutive six of the over. This over unsettled Kandurata — who were looking good a few moments ago. Such was Doeschate’s impact that Thirimanne had to rework his tactics and bring back Ajantha Mendis into the attack earlier than he would have liked.

There was hardly a moment in the game when Doeschate was seen idle at the wicket. If he was not launching poor balls to the stands, he was busy nurdling the ball around for singles and the quick twos to put pressure on the opposition and force them to commit an error. His 32-ball 64 went on to be the difference between the two sides.

With so much to offer in the shorter forms of the game, ten Doeschate is surely a captain’s delight and could be one of the impact players at the CLT20 2013. 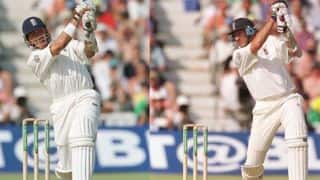