The Big Three of India’s batting – Sachin Tendulkar, Rahul Dravid and VVS Laxman – have amassed a staggering combined tally of 37,312 Test runs between them. They were also, unfortunately, part of the only Indian team ever to be drubbed 4-0 by England. The current edition of the Border-Gavaskar Trophy is also shaping up to be an equally dismal humiliation. 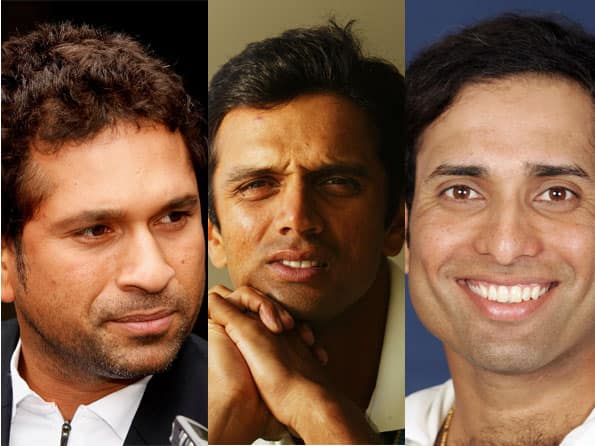 The Big Three of India’s batting – Sachin Tendulkar, Rahul Dravid and VVS Laxman – have amassed a staggering combined tally of 37,312 Test runs between them. They were also, unfortunately, part of the only Indian team ever to be drubbed 4-0 by England. For a drubbing of similar proportions, one has to go back to the Ajit Wadekar-led debacle of 1974, when England beat India 3-0. The current edition of the Border-Gavaskar Trophy is also shaping up to be an equally dismal humiliation.

On the face of it, there is still no solid case to drop either of the above-mentioned greats. Laxman has looked out of nick for quite some time, but at the moment the numbers are not quite damning. Each batsman averaged over 40 last year and Dravid of course had a terrific 2011. It is also largely true that their replacements would still be stepping into outsized shoes. After all, Dravid’s three centuries in a series in England is no mean feat and the Virat Kohlis and Suresh Rainas would have a long way to go before they can hope to get there.

But there definitely are questions now about what this means for their legacy. At the end of the day, cricket is a team game. The most telling contribution of the Big Three is not this imposing mountain of runs, with another daunting tally of tons to go with it. What the Holy Trinity did for the Indian team was to not only shore up its respectability but make it competitive abroad. Former Indian captain Sourav Ganguly and, intermittently, Virender Sehwag also played an important role in this transformation.

In Laxman’s own words, the seeds of this transformation were sown in a humiliating whitewash in Australia in 1999-2000. Australia were just too formidable for India and I don’t know how different the ultimate result would have been even with a better Indian team. But this generation of Indians refused to settle for defeat abroad. They wanted to change India’s reputation as poor tourists and blast the taunt of “tigers at home, lambs abroad” often targeted at them.

To a large extent, they did. With India’s bowling attack hardly lethal at the best of times, they shouldered the lion’s share of the burden in lifting India’s away performances.  A 1-1 series in England in 2002 first bucked the trend, followed by an identical result in Australia in 2003-04.  Eventually, England, West Indies and New Zealand were conquered and in 2010-11, India squared the series for the first time in South Africa as well. Just as the World Cup victory of 2011 was the high point in India’s recent overs-limit cricket, that, it has to be said, was the high point of India’s Test performances. The writing was already on the wall as England confidently brushed asideAustralia to win the 2010-11 Ashes 3-1. It had taken great efforts from Tendulkar and Laxman as well as no small measure of complacency from South Africa to avoid a series defeat in South Africa. With none of the three getting younger, there was no way India’s results would get better in the near term.

Whether they recognised it then, we cannot tell. Hopefully, they do now. Because, like it or not, the Big Three’s fabulous achievements will now be tainted by the English drubbing and, likely, an Australian one as well.Having toiled hard to shore up India’s reputation in away series, Tendulkar, Dravid and Laxman will now be seen as also having contributed to a return to darker days, to the forgettable decade that was the ’90s.

With the exception of Dravid, they would also not quite be able to say it was not for lack of contributions from their side. Tendulkar and Laxman didn’t rise to the challenge in England.  Although he has looked in great nick inAustralia, Tendulkar’s 80-odd has been hopelessly dwarfed by Australia’s three centurions – Ricky Ponting, Mike Hussey and the triple century maker, Michael Clarke. The best Tendulkar, Dravid and Laxman could do has not been enough this time and those are words one wished one didn’t have to say of them.

Sunil Gavaskar has said on the subject of retirement that one should leave when people say why and not why not. He left with a final master class against Pakistan, a fourth innings 96 on a Bangalore turner, with India’s second highest scorer, Mohammed Azharuddin making 26 runs. It took some time, thereafter, for India to regroup and a new generation of batsmen to find their feet. But Gavaskar did not have to play through that painful phase. And neither did Justin Langer, Glenn McGrath, Shane Warne and Adam Gilchrist, all of whom left with their heads held high. Ironically enough, Ganguly, who was once dropped amidst much acrimony, marched off the battlefield a victor in 2008 and is now commentating over the tragedy unfolding Down Under.

Sadly, Tendulkar, Dravid and Laxman have emulated Kapil Dev and not Gavaskar in the matter of calling time on their career. They have carried on even as the team has started to sink and they have looked more human more often than before. One can safely say that at this point, the retirement of either, and especially Laxman, will evoke sadness and fond affection for a player that we will miss but not surprise or shock. It is about time, now…not a moment too soon.