Like many cricket aficionados of India, this writer too found it difficult to choose as to which team to support in the final of the Champions League Twenty20 (CLT20) at Ferozeshah Kotla, Delhi. 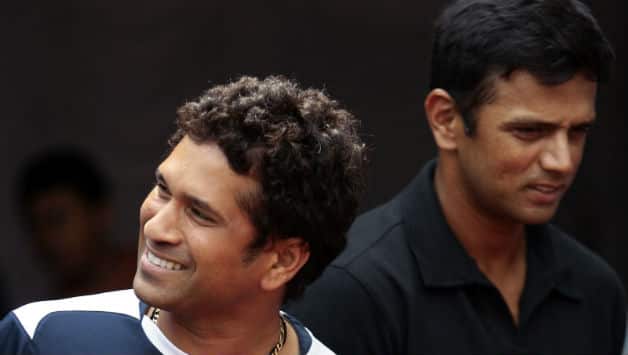 They may be very few, but gentlemen like Sachin Tendulkar (left) and Rahul Dravid still exist in what is supposedly the gentleman’s game © AFP

Like many cricket aficionados of India, this writer too found it difficult to choose as to which team to support in the final of the Champions League Twenty20 (CLT20) at Ferozeshah Kotla, Delhi: To support the one captained by a member of that rare breed of gentlemen who was as solid as a wall on the cricket field, or the one which had in its ranks a master blaster whose phenomenal achievements have become the cricketing touchstone against which the batsmen of all generations are and will be appraised?

In fact, the said match was not about two Indian Premier League (IPL) franchises; it was all about two Indian batting greats. That both of them — Rahul Dravid of Rajasthan Royals and Sachin Tendulkar of Mumbai Indians — were playing their last T20 match only made the choice much more difficult and no less emotional. Emotional because this writer belongs to a generation that not only grew up watching these two gentlemen play but also grew up along with them.

Sunday’s CLT20 final match was special, for it gave us one last glimpse of the batting legends together on the field as professional players. Dravid has now retired from all forms of competitive cricket and Tendulkar will henceforth be seen only in white flannels in Test matches.

There were cheers for both of them from the spectators as well as the rest of the players. Both were given guards of honour by their respective teams. There was goodwill all around and the warmth in the air was palpable. The batting legends too did not miss the significance of the occasion.

“One final time is nice. It’s funny that we have played against each other more in coloured clothing,” said Dravid, and added, “Even though Tendulkar is of my age or two months younger to me, he is seven years senior to me as an international cricketer. When I came into the Indian team, in my third Test, Tendulkar was India captain. He was someone you would look up to as a young cricketer growing up. You saw this young kid do amazing things across the world. It was sort of inspiration for all of us playing First-Class cricket.”

Tendulkar too returned the compliments, describing Dravid as a “master technician.”

“Absolutely, he is a master technician. Any day in my team, he will be number three, because there were so many innings in which he batted brilliantly. When the rest of the guys found it difficult, he was comfortable. He loved challenges and I knew we could bank on Rahul at the times of difficulty,” recalled the little master fondly.

Interestingly, in their final appearance in a match together, though on opposite sides, both Tendulkar and Dravid were bowled out rather cheaply: Tendulkar was clean bowled by Shane Watson for 15 after scoring two breathtaking boundaries in the previous two deliveries, and Dravid, who walked in as the eighth batsman, made just one run before exposing his leg stump to a Nathan Coulter-Nile delivery. But that did not take anything away from the greatness of the two batting maestros who have together scored close to 92,000 runs in all formats of the game.

Asked if his jersey number should be retired, Dravid magnanimously said, “I’m okay giving away my jersey number (19). Dinesh Karthik is wearing mine, I think.” The No 10 jersey made famous by Tendulkar would also go to a youngster in the future, and Tendulkar would have no complaints. For these two finest achievers, it would be like passing the cricketing baton to the next generation. They may be very few, but gentlemen still exist in what is supposedly the gentleman’s game. It is just the god doesn’t make men like ’em anymore.