Most prolific pair of batting partners in Test cricket.

Rahul Dravid refers to himself and Sachin Tendulkar as the “creaking terminators”. But when the twin towers of modern day batsmanship come together, the resulting symphony more often than not continue to end in brilliant scores. The two combine to form the most prolific pair of batting partners in Test cricket, writes Arunabha Sengupta

The Indian score read 97 for one.

James Pattinson ran in and made the ball seam in just a shade. Virender Sehwag shaped to drive through the covers, with negligible displacement of feet that characterises his batting. The ball deflected off the inside edge and crashed into the stumps. The Indian opener walked back for 67. It was the end of an innings that had promised many more. With the big breakthrough, the Australians celebrated.

Well, did they really?

I often wonder whether celebrations on such occasions are marked with the same jubilation and merriment that generally accompany the retreating footsteps of a top order batsman. For even as the bowler was having his back patted and hand shaken, walking in to join Rahul Dravid was Sachin Tendulkar.

It was almost like drilling a tunnel to escape from the Tower of London, only to resurface inside Alcatraz!

Having earned the wicket of a man who had just gone past 8,000 runs in Test cricket, the young Australian bowling attack was now faced with the twin towers of batsmanship with 28,000 runs and 87 centuries between them, spreading out the most intimidating collection of numbers ever for a fielding side to wade through.

True, Dravid was looking edgy, in distinct discomfort against Ben Hilfenhaus and James Pattinson. But, looking at the figures strewn along the glorious career paths, the probability of these two great batsmen being out of touch in tandem was perhaps as unlikely as finding snow in Sahara. Indeed, the first ball after tea, dispatched with calculated disdain over the fine third man boundary by Tendulkar, showed signs of things to come.

Once in a while one of the giants of modern batting may stutter along those few unavoidable patches of time, when his demeanour at the wicket hints at a mortality, sharply contrasting to his accomplishments. However, he has to do little more than raise his eyes to the other end of the 22 yards for the best possible inspiration. If one of the two eternal flames flickers for an instant while the opposition tries to storm the citadel, there can be no greater spark of genius to rekindle it in the entire cricketing world than the man at the other end.

Thus, not only are they the two batting colossuses who stride the record books taller than any other Test cricketer in history, when they get together at the wicket it results in symphonies of batting that often lead to delightful scores. Dravid generally contributes the solid basso continuo for structural harmony, where Tendulkar joins him after sporadic forays into virtuoso solo demonstrations of genius.

The two middle-order men have added more runs in the history of Test cricket than any other pair to have walked together on the pitch, leading the way in terms of hundred and fifty run collaborations as well. The 140 associations between the masters have combined into a cumulative total of 6,864 runs at 51.22, with 20 century and 29 fifty-run stands.

The famed West Indian duo at the top of the order, Gordon Greenidge and Desmond Haynes, are at the second spot in all the categories while consuming eight more innings, with 6,482 runs at 47.31, 16 centuries and 26 fifties together. Matthew Hayden and Ricky Ponting have also put together16 hundred run partnerships, but lag a long way behind in aggregate.

The only other world leading pair who performed in a comparable double team were perhaps Freddie Trueman and Brian Statham. The two fast men who interchanged their positions quite often at the top of the wicket-takers list, opened the bowling for the English team in the 1950s. Not too many batsmen of the era were eager to take guard against deliveries that swung and seamed at disconcerting pace from both ends.

Likewise, not too many bowlers of the present generation consider themselves lucky to run up with the ball when batting greats Dravid and Tendulkar pitch their virtual tents on the crease, preparing to spend the next few hours at the wicket.

The first major partnership between these two took place way back in 1996-97, when they put on 170 against a four-pronged West Indian pace attack on the tricky Bridgetown wicket. And they continue their work even today, the “creaking terminators”, one and a half decades down the line, two giant pillars holding together the framework of the innings.

The 117 runs that they stitched together in the first innings at the Melbourne Cricket Ground, on Day Two of the first Test, can have a huge bearing on the outcome of the match and the series. A partnership of immense value shared by the two eldest statesmen of the noble game, against a team of bowlers who were variously in cribs, laps, prams or even un-conceived and unborn when the two masters had taken their first steps in the international arena. 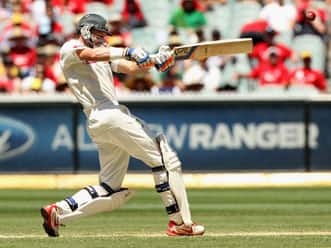