Almost everyone present around the track stood up to give a standing ovation as Tendulkar drove forward, covering 80 meters within no time. Spectators held their breath, aware that they were witnessing a historic moment. And just after he had covered 94 meters, Tendulkar’s kart spun off the field, stunning the gathering into pin-drop silence. 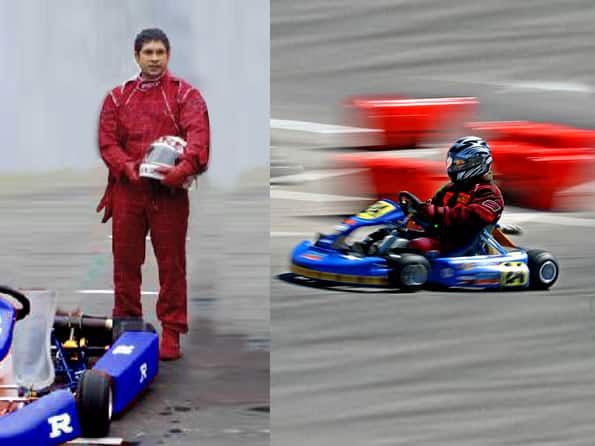 Spectators held their breath, aware that they were witnessing a historic moment. And just after he had covered 94 meters, Sachin Tendulkarâ s kart spun off the field, stunning the gathering into pin-drop silence â Photoshopped pix by Jyoti Desale

After a torrid time in the first half of the ongoing India Australia Test series, Team India took a much-needed break from cricket and went go-karting to distract themselves from events on the field. The idea, suggested by captain Mahendra Singh Dhoni and approved by coach Duncan Fletcher, seemed to be working really well to start with, as the boys were seen enjoying themselves and seemingly getting back into the groove – before disaster struck.

Virender Sehwag flew off the blocks, expertly steering his kart through the various turns and gaining several meters on the others within a couple of minutes. Trouble began when Sehwag spotted a pigeon flying right in the middle of the track a little in front of him. Determined to swat it away, the dashing opener chased it all along the straight stretch of road and drove his kart right off the track instead of making a turn at the end. Alas, it was the pigeon and not the Nawab of Najafgarh who got off to a flier, pouring cold water over the think-tank’s plans.

Almost a lap behind Sehwag, Rahul Dravid drove with poise and assurance, expertly maneuvering his vehicle and making turns with optimal velocity. He smartly swung out of the way of incoming vehicles, never taking his eyes off the steering wheel. The Indian team began to prepare for a lazy, much-needed, siesta, confident that Dravid would keep things tight.

“Looks like the Indians are in the driving seat here, but just get the feeling that this might go down to the wire, Chappelli,” said Ravi Shastri, even as Ian Chappell began to bite into his hat to preserve his sanity.

Suddenly, Dravid’s car encountered a fork in the track prompting him to drive down the wrong line and lose his steering wheel in the process.

Dravid’s exit paved way for Sachin Tendulkar. Almost everyone present around the track – kids of all ages, their parents and track officials – stood up to give a standing ovation as Tendulkar imperiously drove forward with exquisite timing, covering 80 meters within no time.

Suddenly, tension began to build up in the air. The raucous, carnival-like atmosphere, gave way to an eerie silence as Tendulkar proceeded gingerly towards the milestone, meter by meter.

Dhoni shooed away some pesky reporters, berating them for contributing to the pressure. Spectators held their breath, aware that they were witnessing a historic moment. And just after he had covered 94 meters, Tendulkar’s kart spun off the field, stunning the gathering into pin-drop silence.

The excitement in the field waned after Tendulkar’s exit, with those waiting for their turn growing increasingly restless. Things came to a boil when a couple of kids next in line to use the track asked Virat Kohli to ‘hurry up’. An enraged Kohli immediately showed the kids his middle finger, prompting officials to cut short the team’s go-karting exercise, much to the consternation of Umesh Yadav, Ishant Sharma, Zaheer Khan and Ravichandran Ashwin who were patiently waiting for their turn.

A visibly disappointed Ashwin later told media persons that “there was nothing in the track for the bowlers.”

Coach Fletcher was just as despondent. “This is so annoying, man,” he groaned. “We came here to take our mind off cricket, and the boys end up repeating the stuff last week!”