It was destiny, a feat written in the stars long ago.

Ever since he had started piling runs in the Harris Shield, the Indian fans knew that one day Sachin Tendulkar would own all the records held by Sunil Gavaskar and perhaps many more. Even as the old master prepared to hang up his boots, a new legend was already being recognised, making his way towards international cricket with baby cheeks, short stature and huge strides.

In 1983, Gavaskar had become the holder of the world record after hitting his 30th hundred against West Indies at Madras. He had scored four more in the remaining days of his career to head the charts with 34. The original Indian Little Master had perched on the top of the peak for 22 years.

A journey of 35 centuries was of course unprecedented that is automatically implied by the term world record . However, the countdown had begun almost the very day Tendulkar made his debut at the age of 16. Even as he battled the best bowlers around the world as a teenager, the general belief was that the road was paved with inevitability. Indian fans somehow always knew that he was marked for greatness the man chosen by the cricketing gods to take over the crown from Gavaskar.

The start was slow, constrained by the atrocious scheduling of BCCI. The first six years saw him hit just 8 centuries hampered by the abysmal rate at which India played Test cricket. Yes, in the first six years, Tendulkar had taken his average beyond 51, but had played just 38 Tests, scoring 2,483 runs.

However, from 1996 to early 2004, the greatness zoomed off in a spectacular career graph. During this period, he played 76 more Tests, scored nearly 7,000 more runs at nearly 60 runs per innings, and hit 25 more centuries. Tendulkar was not yet 31, but he had already notched up 33 centuries from 114 Tests. Gavaskar s record was just one hundred away. To Tendulkar hundreds seemed to be a force of habit. The nation waited for the certainty to be scripted.

And then there was the scare. The body rebelled under the constant strain. The country winced as tennis elbow plagued the genius. The road to recovery seemed protracted, endless, and fraught with pain, uncertainty, misgiving and disquiet.

When he returned after missing two Test matches against Australia, the runs were slow to come. For the first time in a career spanning a decade and a half, India saw Tendulkar struggle.

After four barren Tests, Gavaskar s record was equalled on December 11, 2004, against the lowly Bangladesh. The master made it a huge one all of 248. But, the after-taste was less than perfect. It was Bangladesh, after all a minnow.

Yet, there were similarities. Both Gavaskar and Tendulkar had reached their 34th hundred in their 119th Test. Tendulkar had taken 192 innings to Gavaskar s 206.

And while Tendulkar touched the milestone against Bangladesh, Gavaskar had scored his final hundred against Sri Lanka, the minnows of his era.

The nation now waited for their icon to pull ahead. Five more Tests were played across a full year, and every time, anticipation reached snapping point.

Tendulkar got to 94 at Mohali against Pakistan within a stroke of the record and then fell to Naved-ul-Hasan.

He looked good in both innings at Kolkata, especially in the second innings, but was done in by his old nemesis, Steve Bucknor. The ball from Abdul Razzaq passed harmlessly, some couple of miles away from his bat, but the slow, sinister finger went up. A visibly fuming Tendulkar left for 52.

When Sri Lanka came over in late 2005, there was the possibility of his notching up a meaningless hundred at Chennai. India waited for rain to subside for hours and played their first innings on the fifth day. Yet, such situations seldom saw him score too many, and Muttiah Muralitharan trapped him leg-before for 22.

The series moved to Delhi. It was Tendulkar s 125th Test. Gavaskar had played 125 in his career.

The great man walked in at 56 for 2. Newly appointed skipper Rahul Dravid had opened the innings and had just been outwitted by Murali. At the other end was VVS Laxman, in the midst of one of his flourishing expressions of artistry.

Tendulkar s innings proceeded like a study in masterful compilation. The recent tussle with his dodgy elbow had taken away the lustre of the young genius who brought off audacious strokes to perfectly pitched good deliveries. In its place there was the glow of wisdom, of reinvention, of rebirth laced with enlightenment.

There was a flick for four off Dilhara Fernando, who momentarily strayed away from the probing off-stump line. There were appeals, loud and confident, by Muralitharan and Fernando. Twice the big crowd gasped, twice the umpire remained unmoved, and twice there was a synchronised sigh of relief. And then there was a divine cut off the great spinner that seemed to foretell something special.

At 133, Murali came in from round the wicket and floated a doosra past Laxman, taking the edge off his bat on the way to Kumar Sangakkara. Deposed skipper Sourav Ganguly, playing under enormous pressure, walked in to join Tendulkar.

By now, the master was content to go into his shell and bide away his time during the difficult period, seeing off the spell of Murali. Yet, when he struck the ball, the magnificence of the timing could be heard ringing around the stadium.

In the end, patience emerged victorious. Muralitharan was powered through the off-side for three consecutive boundaries a drive and two cuts. There were palpable signs of the tweaker tiring, relying increasingly on luck rather than guile.

The Tendulkar innings was also growing more and more ominous by the minute. When leg-spinner Malinga Bandara flighted one in the air, Tendulkar strode out and let his bat swing in a straight full arc. The ball went high and far, over long-on, into the exultant crowd. And when Chaminda Vaas came back, he was glanced off the hips and driven through the covers for two exquisite boundaries.

And as the light faded, Vaas ran in once again, pitching it on good length. Tendulkar tapped it off his hips and ran down the wicket. The crowd roared and the gloved hand punched the air. The mandatory look at the skies followed, and the legend allowed himself the indulgence of a somewhat longer celebration than usual. The bat reached for the heavens and then his heart. It was after all his 35th, the ton that placed him at the top of the world. It had taken 177 balls and was studded with 13 fours and a six.

The baton had changed hands. The long-proclaimed heir was now firmly perched on the throne. Anil Kumble was on the team balcony with his camera, capturing the epochal moment. Skipper Dravid and coach Greg Chappell watched absorbed, caught in the history of the occasion. Not far away was Gavaskar himself, delight written on his face. He was happy perhaps happier than when he had scored that record-breaking ton at Madras, all those years ago.

Tendulkar fell for 109 the next morning, leg-before to the persevering Muralitharan. The off-spinning great went on a merry wicket-taking spree and India managed a not too impressive first-innings score of 290.In response, Anil Kumble s 6 for 72 restricted Sri Lanka to 230.

This was followed by Dravid s extraordinary ploy of sending Irfan Pathan to open the second innings. The move came off in spectacular fashion. Pathan s 93 and strokeful unbeaten half-centuries by Yuvraj Singh and MS Dhoni helped India set a target of 436.

At one stage, Sri Lanka reached 109 for 1 in their chase, before losing wickets in a flurry and collapsing to Kumble and Harbhajan Singh.

There was one sour note. After the match, the euphoria of the new world record was somewhat marred with the controversy surrounding the omission of Ganguly from the final Test. But, happiness reigned in most quarters. The coveted record had changed hands, but it would stay in India.

The man whom Tendulkar displaced from the pinnacle could not have been more delighted at the younger master s feat. Smiling widely, Gavaskar told PTI, I have said it before that Tendulkar is the closest thing to batting perfection that the game has seen Well done Sachin, and keep that Champagne on ice.

And then the great man went on to make his strikingly accurate prediction, Make no mistake, he is not going to stop at 35. He will score many more and give pleasure to cricket lovers all over the world … he is only 32 years old and should be able to play for another six years at least, if not eight. He could well finish with 50 centuries in Tests and be the first to score 100 international centuries.

He almost got that spot on. 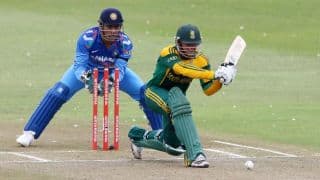