The raising of the Adidas blade acknowledging the applause of an appreciative crowd and awe-inspired teammates alike coupled with the looking up to the heavens to thank the Gods that might be, and, probably a benevolent departed father, demonstrated the culmination of a nerve-racking year. 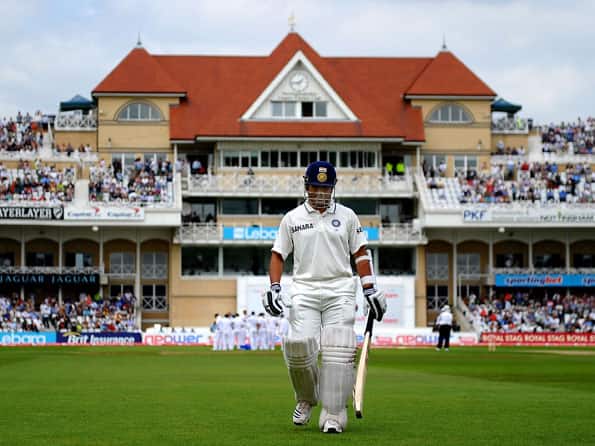 As reverence transformed to remonstration, and as devotion metamorphosed into denigration, Sachin Tendulkar rode through the obstinate rough patch in the same sublime manner as he had rode through many a rough and rising delivery throughout his glittering and glorious career © Getty Images

The man who according to the former Australian captain Ian Chappell was in possession of ‘peripheral awareness’ prepared himself to face Shakib Al Hasan, an under-rated all rounder from Bangladesh who was all of two years old when his opponent first got a taste of international cricketing experience. The batsman was steady and statuesque in his bearing with a head as still as a deep resting stream. As Shakib with his inimitable round-arm action released a well pitched up delivery, the batsman, using his heavy blade softly pushed the ball on the onside and scrambled a run. This seemingly nondescript event in the midst of an India-Bangladesh game, in the picturesque stadium of Mirpur, signaled an event epochal in its character and momentous in its nature. For the batsman who had taken that run was Sachin Ramesh Tendulkar and the eventful single brought about his 100th international hundred, a feat unparalleled till date and, one that would arguably remain unconquered.

The raising of the Adidas blade acknowledging the applause of an appreciative crowd and awe-inspired teammates alike coupled with the looking up to the heavens to thank the Gods that might be, and, probably a benevolent departed father, demonstrated the culmination of a nerve-racking year not only for the messiah of Indian cricket, but also for his fanatical and adoring supporters.

Tendulkar had endured an extended century making drought spanning 33 innings, three tours and more than 365 days. Though at times he came perilously close to achieving this memorable distinction, his form by his own standards was, but a pale shadow of his brilliant and belligerent past. The exuberant, effervescent and sprightly Tendulkar of old was replaced by a tentative, timid and tepid batsman, who after exhibiting brief moments of aesthetic flourish, merely flattered to deceive. The unusually frequent sight of the bat being tucked under the arm as Sachin made his way back to the pavilion after yet another uneventful score became the unwitting reason for many a stirring debate and a raging deliberation. Commendable feats of the past were relegated to the confines of the dust bin of history and the future of this once invincible star was being dissected in public.

As the dreaded phrase ‘graceful retirement’ commenced to rend the air, eminent cricketers of yore started providing their unflinching, unhesitating and at times unsolicited views regarding the most opportune moment for this Master of the game to walk away into the sunset. The most natural amongst all cricketers to have graced Indian cricket, and also one of world cricket’s most enviable all-rounders, Kapil Dev, vehemently declared that Tendulkar ought to have bid the game goodbye once India reigned triumphant in the World Cup of 2011.

Little did the mercurially talented cricketer realise, that he was suffering from a foot-in-the-mouth syndrome as he seemed to have obliterated from his own memory the painful phase when he trudged along on weak knees and non-existent pace towards the fag end of an illustrious career. It was a classic case of the pot calling the kettle black!

Caustic jokes and cruel hash tags made their way into social networking sites and to compound the agony, batsmen of the likes of the talented Virat Kohli, and the genial Rahul Dravid seemed to possess an ability to conjure tons at will! Elsewhere Alastair Cook and Jacques Kallis notched up hundreds before once could say “Open Sesame” and even the once woefully out of form Ricky Ponting regained his indefatigable stamp of supremacy as he decimated a below par Indian attack in the series Down Under.

But throughout this roiling period of tumult and turmoil, Tendulkar maintained a composure that was commendable, a confidence that was innate and a character that was worth emulating. Though, in all probability, the proverbial, precious and almost prodigal hundred would have undoubtedly been a Damocles sword hanging over his neck, he never even for an instance exhibited an outwardly or apparent admission of the same. But for an understandable affront at his dismissal after being ‘obstructed’ by Brett Lee, resulting in a run-out, and an incomprehensible consternation at being caught by Mahela Jayawardene off a Suranga Lakmal full-toss, he played the game in a manner which he has been doing for a period of over two decades.

Every premature and discouraging dismissal received the same response – a brisk trot back to the confines of the dressing room with no pyrotechnics or nonplussed  expressions. All that the disappointed admirer was privy to was the sight of an exasperated tongue licking the lower lip within the confines of a sturdy helmet and the vanquished batsman being replaced by his designated teammate.

Occasionally the shot that ought to have been played, but was not executed, was shadow practiced for the sake of posterity. While an unlikely Ravi Rampaul put paid to all hopes of a dream hundred in front of a home crowd at the Wankhede, and a likely Peter Siddle in Australia rattled Tendulkar’s stumps to dampen many a spirits, the gladiator maintained a rock-solid temperament. But it would not have required either a psychiatrist or a behavioral psychologist to comprehend the fact that behind such a saintly demeanor lurked a veritable catharsis. As reverence transformed to remonstration, and as devotion metamorphosed into denigration, the highest run-getter in the world and Donald Bradman’s object of praise rode through the obstinate rough patch in the same sublime manner as he had rode through many a rough and rising delivery throughout his glittering and glorious career.

Tendulkar’s career spanning an astonishing 22 years has ensconced within it tales of triumphs and auguries of tribulations. His rise and fall has been almost synonymous with the fluctuating fortunes of Indian cricket. From the time he made his debut against Pakistan as a raw, impetuous and innocuous looking child of 16, till such time he raised his bat in Mirpur two decades hence as a mature, magnificent and  marvelous 38-year old man, he has been the bastion of Indian hopes and the torch bearer of a billion aspirations. His affair with the game boasting of such longevity has been a literal penance. Dedication, determination and devotion have been his avowed objectives. He has in fact epitomised the unforgettable “Brook” of Alfred Lord Tennyson – the brook which has been characterized as follows:

“Till last by Philip’s farm I flow
To join the brimming river,
For men may come and men may go,
But I go on for ever”

For 22 two years, this legend has occupied the ‘dressing room’ and has been an unwavering spectator to a cascading flow of men who came and went by. The deserved and the damned; the sublime and the silly; the reasoned and the relegated. But like the obedient brook of Tennyson, Tendulkar has been the preserver, protector and the performer that Indian cricket has so craved. While his on-field achievements deserve no recanting of justification or proof of quality, his off the field behavior has also remained untarnished and unblemished. But for an avoidable controversy involving the waiver of Customs Duty on a gleaming red Ferrari gifted to him by the iconic Michael Schumacher, Tendulkar has maintained his balance and brevity.

Fame has never been granted permission to get to the mature cerebrum of this intelligent cricketer, let alone get the better of him. More than anything else, he has been the purveyor of hopes and the harbinger of good tidings for the game of cricket in a cricket-obsessed country.

While his match-saving feat at Manchester in the capacity of an impetuous young boy evoked motherly affectations, his brilliant handling of Craig McDermott and Co. on a fast and bouncy Perth track elicited fatherly pride. Two glorious back-to-back centuries at Sharjah against a bewildered Aussie attack brought an element of romanticism to the game! A phenomenal hundred, albeit in a losing cause against Pakistan whilst nursing a creaky back literally ended up with his fanatical followers shedding tears, and passing a veritable test of will in scoring a double hundred at Sydney following a run of unenviable scores in the 2003 season provided ample testimony to the mettle of which the man was made.

While feats such as these are too very numerous to be rendered an exposition or an elaboration, the fact is that the phenomenon called Sachin Tendulkar has lent an altogether new dimension to the game of cricket – a dimension which ought not to be judged solely for its statistical weight, for statistics represent only an attendant and inevitable accompaniment that cannot be severed from the larger perspective of  common sense; a dimension that has encapsulated within its sweeping breadth an undying love for the game and an unstinting service to its cause; a dimension which recognises that no player is bigger than the game itself and that attainment of success depends to a great extent on the possession of the virtue of simplicity; and most importantly a dimension that severs every iota of complexity from this pristine and precocious game, a dimension that brings with it an awareness of the fact that irrespective of whether one wins or not, the real spirit lies in the passion with which the game is revered, regarded and respected.

The formidable Matthew Hayden might well be forgiven for his grossly exaggerated praise of Tendulkar. Hayden famously remarked that God batted at No. 4 for India. While Tendulkar, can by no stretch of imagination be equated with divinity, there is no doubt that he is a human extraordinaire. He is a human being with a singularly solid purpose. Sachin Ramesh Tendulkar is a human being – of cricket, by cricket and for cricket!

Resurgent Windies in sight of unexpected series victory against Australia