Sachin Tendulkar bid adieu to the Twenty20 format with his side Mumbai Indians lifting the Champions League T20 2013. It has been a remarkable journey for the veteran, who was written off in the young man’s format. But, as champions often do, he hit back at his critics with performances. Not only that, but his star status helped create one of the biggest sporting brands in the country. Nishad Pai Vaidya explores the various aspects of Tendulkar’s T20 career. 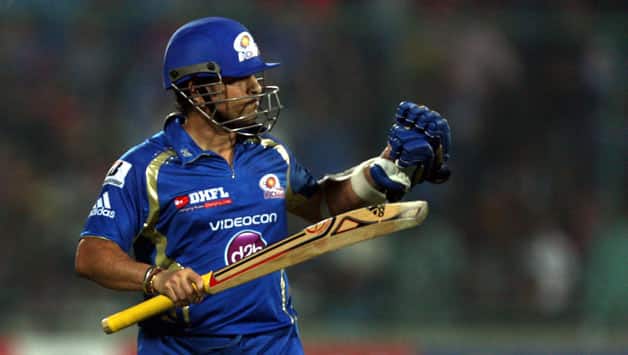 Sachin Tendulkar bid adieu to the Twenty20 format with his side Mumbai Indians lifting the Champions League T20 2013. It has been a remarkable journey for the veteran, who was written off in the young man’s format. But, as champions often do, he hit back at his critics with performances. Not only that, but his star status helped create one of the biggest sporting brands in the country. Nishad Pai Vaidya explores the various aspects of Tendulkar’s T20 career.

It was the fifth over of the Champions League T20 (CLT20) 2013 final. Sachin Tendulkar marked his guard and typically walked towards square leg while surveying the field. The Feroz Shah Kotla crowd chanted the usual:  “Sachin… Sachin!” Oblivious of the buzz, he marched to the crease and took strike. The master hadn’t been at his best for a while and the bowler, Shane Watson, would have fancied his chances as he ran in to bowl to the ageing great. But, this occasion had to be special for it was Tendulkar’s final appearance in coloured clothing. Something had to happen!

The first ball from Watson was on the pads and Tendulkar tickled it past short fine-leg for four. But, what followed was pure magic! Watson overpitched outside the off-stump and Tendulkar essayed one of the most beautiful cover drives you would ever see. There was authority, grace, timing and dominance — everything rolled into one. He enjoyed it himself as he stood still after completing the stroke. Vintage stuff!

The crowds were in raptures; expecting a big knock from their favourite. However, in an anti-climax, Watson shattered his stumps off the next delivery, ending Tendulkar’s T20 career. The Feroz Shah Kotla stood up to applaud him as he waved his bat on his way back to the dug-out. Those 15 runs, rather that cover drive, would stay with the fans forever.

Tendulkar didn’t quite have the personal fairytale finish to his T20 career, but being the team-man he has always been, the Mumbai Indians’ victory is what mattered. For him, it is the end of an interesting journey — one where his magnificent aura and appeal spilled into the big bad world of T20. Along the way, he proved the critics wrong, added grace and class to the crude game and of course inspired a whole generation of players.

In a format that was dubbed the young man’s game, Tendulkar certainly proved that age is nothing but a number. In 2007, the veterans opted out of the ICC World T20 to allow the younger breed to take over. India’s victory only strengthened the belief that the veterans would have a hard time tuning their traditional faculties to a brash format. In 2009, John Buchanan suggested that Tendulkar couldn’t succeed in T20 cricket. But, great sportsmen have always had the desire and drive that separates them from the rest. Tell them the odds and they are in for the challenge!

Tendulkar added touch and finesse to prove that there was more to T20 than only power or mindless slogging. During the Indian Premier League (IPL) 2010, he drove and flicked his way to 618 runs in to take Mumbai Indians to the final. An interesting fact is that he only hit only three sixes in the whole tournament. Otherwise, he simply picked it with all class and timing. Those 618 runs came at a strike-rate of 132.61, which is a very good number for any player. It was a lesson for the youngsters, some of whom try too many things at the crease with the urge to score quick runs.

Tendulkar played the solitary T20 International for India and a few games for Mumbai (Ranji Trophy side) in the first domestic T20 tournament in India. Majority of his games have been for Mumbai Indians, for whom he essayed numerous important innings. Here are his numbers for them:

The advent of the IPL ushered in the era of a club-based fan-following. However, one thing was clear: Tendulkar is a national passion. Irrespective of the fact that he played for Mumbai Indians, the loudest cheers were reserved for him even when they visited the opposition’s den. He was above and beyond the new trend — a national icon whose aura transcended the city rivalries. For years, he had donned the India jersey and given the public happiness and joy. How could someone suddenly tell them that he is playing for another side? It doesn’t matter, we will join his camp they said.

It was that Tendulkar factor which made the Mumbai Indians one of the most followed teams at the IPL. His presence in the camp added to the appeal and Mumbai Indians grew into the brand they are. The legend was theirs, who got them unconditional support throughout the country. That was a catalyst for bigger things. Inside five years, Mumbai walked into the top 150 most valuable sports team brands in the world. It takes years for a sports team to build those credentials, but it was done in the time frame of half a decade. Would that have been possible without Tendulkar? The management would shudder to think.

It is a known fact that the IPL has allowed the youngsters to rub shoulders with their heroes. It has also given the domestic players a stage to perform and showcase their talent. It wasn’t only about playing with the foreign stars, but also the Indian legends like Tendulkar. Those fortunate enough to have made it to the Indian team already had the pleasure of that experience. What about the domestic players who went almost un-noticed in the pre-IPL era? They would only play with or against him if he decided to turn up for an odd domestic fixture — which were few and far in between. Thanks to the IPL, many cricketers in India fulfilled their dream.

Tendulkar is one figure the youngsters look up to. His presence in the dressing room is a massive boost for the side as there is a sense of stability and assurance. The tyros who have played for the Mumbai Indians can boast for the rest of their lives that they shared the dressing room with him. His passion and childlike enthusiasm for the game was infectious and it rubbed off on the others. His exemplary work ethic and preparation would have been a huge lesson for any budding cricketer in the Mumbai Indians side. It was a chance to pick the finer points of the game from the legend himself.

On the other hand, the bowlers in the opposition camp had his wicket on their agenda with more ulterior motives. As Andrew Flintoff once said, “When you bowl at him you are not just trying to get him out, you are trying to impress him.” Dishant Yagnik, the Rajasthan Royals wicketkeeper, summed it up perfectly when he spoke to CricketCountry, “Playing cricket with Tendulkar is a huge honour. We grew up watching him play the game. Let alone practice, but to play a game with or against him is a dream come true. To get him out (Yagnik stumped him during an IPL 2011 encounter), is sone pe suhaaga, as the saying in Hindi goes. For me, it’s an outstanding moment of my career.”

That was motivation enough. Sadly, there won’t be any more of that in the IPL or the CLT20.

The future and beyond

Mumbai Indians now step into an uncharted territory — without their symbol. Commanding the same fan following would be a tough task and they can only hope for an iconic player to come their way during the next auction. Yet, the appeal would never be the same. The reason is obvious: Tendulkar is Tendulkar.

Meanwhile, T20 cricket would go on as the each facet of the game evolves with time. Tendulkar has indeed left a legacy, but this is a different ball game. His legacy is beyond the runs and is more about his symbolic presence. For his real bequest to India’s future generations is in the Tests and the One-Day International (ODI) arena.

But, for a moment, just imagine what he could have done had he played T20 cricket in his prime. Bowlers would have been running for cover.