It was on the Proteas team bus that I read about Sachin Tendulkar’s retirement from One-Day International (ODI) cricket. I found myself reflecting on my three years of working with him. To me, the opportunity was a privilege. So I thought I’d share some of my reflection here. It was on the Proteas team bus that I read about Sachin Tendulkar’s retirement from One-Day International (ODI) cricket. I found myself reflecting on my three years of working with him. To me, the opportunity was a privilege. So I thought I’d share some of my reflection here.

When I addressed the Indian cricket team for the first time (in 2008), I started by explaining that I did not see them as ‘cricketers’, but as human beings, each with many facets. Being a talented cricketer is only a part of who they are. They may also be someone’s brother, son, friend, parent or partner, and each is a unique emotional, intellectual and spiritual being. I reminded them that they were born with their talent, call it God-given, which is not an achievement but a blessing. The achievement comes when they tirelessly study, train and practice to develop that talent.

Between 2008-2011, I watched Sachin epitomise developing a talent. He paid more attention to and invested more time into practicing his batting than any other player. He never once cut a corner in his preparation for a game, making sure he attended to every detail. After nearly two decades in the international game he had earned the right stay at the hoteI and rest while some of his teammates attended our trademark ‘optional’ practices. Yet he never did. Not a week went by where any player, youngsters included, hit more balls in practice. Add this attention to detail and impeccable work ethic to his extraordinary God-given talent, and it doesn’t take much to figure out why he is so successful.

As mentioned, being an outstanding cricketer is a part, but not all, of the man.

When someone becomes a top class athlete, it does not mean they automatically become a special human. Each one starts out as an ordinary person who happens to be blessed with an extraordinary talent. To become a special person requires that they intentionally develop and mature themselves as a person just as they would work on mastering their profession.

It is fairly common that a cricketer — or any sportsmen, businessmen, politician — who achieves success is lured into falsely viewing himself as a special person, believing he is more important than others by virtue of the fact he can hit a cricket ball more sweetly, and because others may treat him as more special. In India, the amount of adulation, admiration and hero-worship that is lavished on national cricketers poses a huge challenge to their humility. None have been hero-worshipped and admired as Sachin Ramesh Tendulkar. He is worshipped more than some of the Hindu Gods. A priest at an ODI once brandished a banner saying, “Sorry God, but I love Sachin more than you.”

With his unassailable statistics and virtual deification, Sachin has earned the right to believe and act like he is special. But he does not. And it is this characteristic that impressed me at least as much as the Little Master’s statistics, milestones and awe-inspiring performances.

Despite his God-like status, in a country that sometimes overvalues power and status, Sachin exudes a humble, feet-on-the-ground approach. Early in my tenure with the team and during a one-on-one session with him, he spoke of a mantra that he lives by and that his father had passed to him as a young man. He granted me permission to share it.

He told me that, “who I am as a person, my nature is permanent, my results on the field are temporary – they will go up and go down. It is more important that I am consistent as a person, this I can control, my results I cannot“. He added that, “people will criticise me for my results, and will soon forget them, but they will always remember the impact I have on them as a person. This will last forever.” 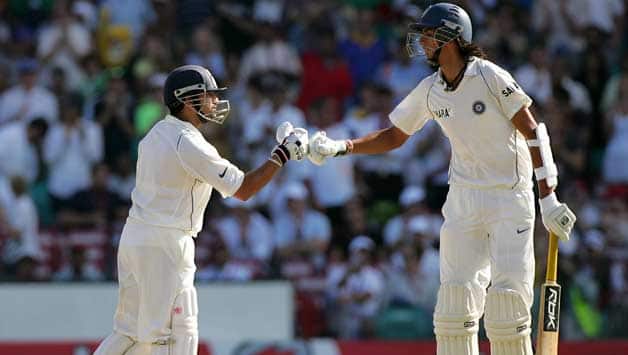 During a net practice, a young Ishant Sharma (right) kicked the ball in frustration after a poorly executed delivery. Sachin Tendulkar calmly went over, picked the ball up and returned it to Ishant, telling him in gentle manner, “it is because of this ball that you have what you have got in life, without this ball you have nothing. Treat it with the respect it is due.” © Getty Images

And so the most mobbed, harassed, pestered and interrupted person in India, rather than expecting kingly treatment from others, is constantly mindful of treating others well and respectfully. During one tour I was entering a hotel elevator with Sachin to depart for a match. A very nervous mom asked if she could take a picture of him with her two young children. We risked being late for the bus, but Sachin obliged, letting the elevator go without him. The nervous mom was shaking so much she couldn’t get the camera to work. I was about to help Sachin out by rushing him along, when he turned to me and said, ‘Pads won’t you help her with the camera, help her to get a nice picture.’ Most who know him have an abundance of similar stories.

He shares his professionalism and teaches respect. During a net practice, a young Ishant Sharma kicked the ball in frustration after a poorly executed delivery. Sachin calmly went over, picked the ball up and returned it to Ishant, telling him in gentle manner, “it is because of this ball that you have what you have got in life, without this ball you have nothing. Treat it with the respect it is due.”

Fast forward to a meeting during India’s triumphant 2011 ICC World Cup campaign. We’re discussing cricket and life, and some of the senior players are asked to share the most significant event in their careers. Sachin’s significant event left me with a lump in my throat.

It happened soon after he was selected to play for India as a 16-year-old, and had returned to his Ranji Trophy team. A 16 year-old friend and teammate approached him and said ‘I speak on behalf of your friends. We know that you are a better cricketer than us, but since you were selected to play for India, you have been acting as if you are a better person than us. We don’t think it is a good thing for you to do.” Sachin marked this comment as one of the most significant events of his career, helping him to realise at a very young age that being a good cricketer did not mean he was a special person. He continues to live this lesson. As a veteran of over 22 years of international cricket, he treats junior teammates as fellow men, including them in conversations, showing an interest in their well-being, asking them questions and helping them with their game.

When someone with an extraordinary God-given talent adds to it an incredibly professional, detailed and tirelessly high work ethic, brilliance arises. The world has known just one Albert Einstein, Wolfgang Mozart, Vincent van Gogh, Michael Jackson and Sachin Tendulkar. When someone with brilliance adds strength of character, humility, respectfulness to being an all-round good person, then the world is blessed with not just sporting greatness, but  true greatness.

(Paddy Upton, who played for Western Province, is the mental conditioning coach of the South African cricket team. After his playing career, he began coaching at the provincial and national cricket levels. Between 1994 to 1998, he served as the physical fitness trainer for the South African cricket team. He was also a key strategist for the then South African team coach and captain,Bob Woolmer and Hansie Cronje respectively. An Indophile to the core, Upton was mental conditioning and assistant coach for Team India under coach Gary Kirsten. Paddy Upton is currently the high performance coach for Pune Warriors India in the Indian Premier League. Upton blogs at http://paddyupton.com/blog/ and can be followed on Twitter at @paddyupton1)