H Natarajan analyses a few pictures that underscores the genius of Sachin Tendulkar’s batting — something that is not discernible while watching fast-paced action on television. The photos capture the degree of difficulty in executing the shots. 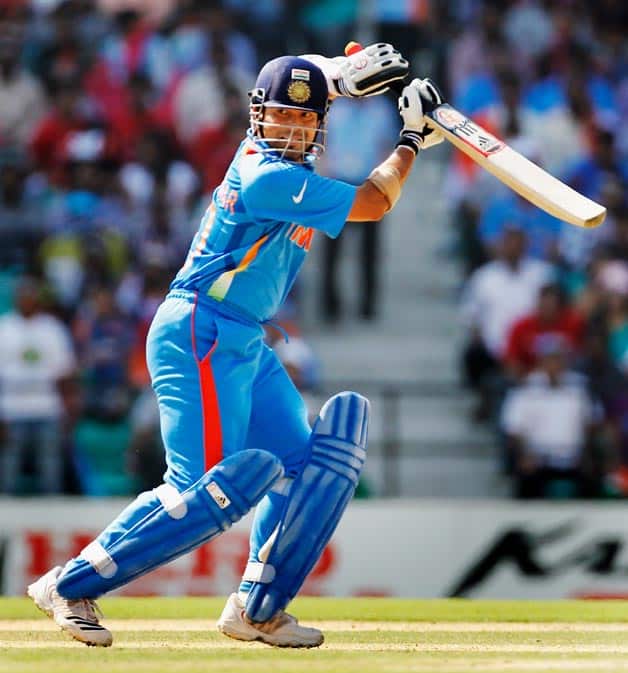 Sachin Tendulkar… an artist at the crease © Getty Images

H Natarajan analyses a few pictures that underscores the genius of Sachin Tendulkar’s batting — something that is not discernible while watching fast-paced action on television. The photos capture the degree of difficulty in executing the shots.

Cricket captains the world over in the last 24 years who have set fields to counter the challenge of Sachin Tendulkar’s batting genius will vouch for Schopenhauer’s thinking.  The captain can plug the holes in the field and the bowler can, at best, bowl to that field with line and length of geometric precision. That is in the realm of a cerebral captain and a disciplined bowler. But those equations become a mockery when challenged by a genius at the batting crease like Tendulkar. The bowler’s best may not be good enough to stop a genius like Tendulkar; the captain will be frustrated that 11 fielders are too few to stop the maestro on a field that may seems like a vast unmanned expanse of land. It may seem an unequal and unfair battle between bat and ball.

Geniuses can defy convention and age-old wisdom to live on their own outrageous terms that will be beyond the comprehension of mere mortals. In Tendulkar’s case, the bat in his hands was like a magician’s wand. At his pomp, Tendulkar seemed an incredible illusionist — a mixture of David Blaine, David Copperfield and Harry Houdini, all rolled into one. And the mesmerising magic was evident in Tendulkar even before he became a teenager.

The challenges of batting on wet wicket in the Dr HD Kanga cricket league was largely instrumental in Bombay supplying high quality batsmen by conveyor-belt methods to the Indian team in the years bygone. Team totals of 20 and 30 were common as batting was a nightmare on the gluepots. And even if the batsman hit a powerful shot, it was not uncommon to see it stuck in the mud at midwicket or cover amid the tall grass and fetch no runs! But this searing examination of batting skills is what made them champions when they batted on good wickets at higher level of the game. And this, in some ways, is an indication why Mumbai have supplied more batsmen than bowlers to the national team.

On wet wickets like the ones in Kanga League, a bowler like medium-pacer Pradeep Sundaram could be a menace. Son of former India player GR Sundaram, Pradeep once took 10 wickets in an innings for 78. Bowlers like Pradeep would become an ogre on these wet wickets and batsmen would find it challenging to get bat to ball. But that’s for more mere mortals. Tendulkar was not in that league — even as a youngster. In his earlier years in a Kanga League game, Tendulkare went on the backfoot and hoisted Pradeep over a distance of 90 metres for a six. And when he was about 14! Others were probably looking for vacant spaces in the field to minimise the risk, Tendulkar was looking at vacant spaces in the stands to maximise his runs!

Milind Rege, the former Mumbai captain who played an important role in the formative years of Tendulkar, recalls that incident in this video:

I remember my coach, former Ranji Trophy player Hemu Dalvi, telling our team: “I don’t care if you overpitch the ball, but don’t bowl short.” As Sunil Gavaskar said in a tete-e-tete years with me years ago while discussing a match in which Rajinder Singh Ghai went for copious runs by bowling short: “I told Ghai, ‘don’t bowl short; the batsman can cut straight past point, hit wide of point or even finer. I can’t set field for that kind of bowling.’ ’’

A good batsman will have multiple options to capitalise on a short ball to find the boundary.

But there is huge chasm between the “good” and the “great”. The latter category can make mincemeat of any ball, if he decides to. There is nothing humanly a bowler or captain can do stop a great batsman in that kind of mood.

Frozen shots of a genius

The other day I was going through the fabulous collection of Getty Images. Some of the photos simply left me stunned. Those frozen shots, clicked with microsecond precision, brought the genius of Sachin Tendulkar’s batsmanship that is lost in the fast-paced action of television coverage.

Let us take a few graphic examples to underscore the genius of Tendulkar’s genius at the crease. The shot above cannot be found in the MCC coaching manuals, like so many other shots in the Sachin Tendulkar School Cricket Excellence. Most batsmen would have left the ball alone; got out of the way by swaying or ducking. It’s a low percentage shot. But look at Tendulkar’s genius in this picture captured by Laurence Griffiths of Getty Images in the 2002 Headingley Test against England: the master batsman is on his toes, knees bent, his short-statured body arched back and crouched very low to give himself room for the incredible essay… and look at the bat and forearm position. Awesome! The intention was to use the pace of Andrew Caddick to hit the ball from the meat, high over the wicketkeeper. And Tendulkar has not taken his eyes off the ball. The intent and precision of the execution is brilliant. Now this is far different from the slash over third-man for six which a few batsmen in the world have adapted to the changing modern game. Tendulkar’s above-mentioned shot was as stroke of genius. Now which captain can set a field to that kind of shot! The willow in Tendulkar’s hand is like a scalpel in the hands of Christian Barnard — an instrument to marvel. The above photo is a variation of the shot described earlier in the earlier picture. Not quite well balanced — the bodyweight is on the right leg, Tendulkar probably did not want to lose a scoring opportunity that is within the ambit of his genius. He leverages all the power in him and what the bat (nicely finishing at the back of his shoulder) has to offer to cream it over the third man fence. Most batsmen won’t attempt the shot; and of those who do attempt, quite a few will perish caught behind or at third man. The degree of risk to reward is heavily tilted in favour of the fielding side. 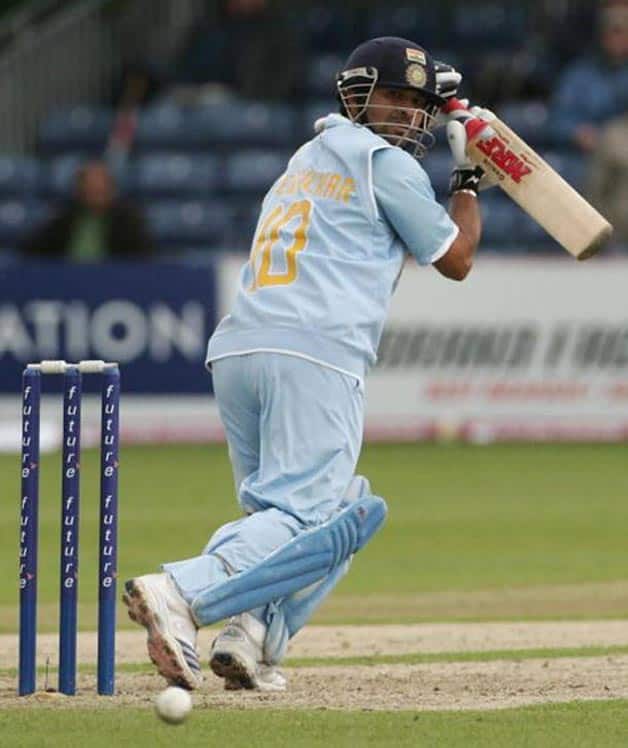 You won’t to get to see photos like the one above. It’s pure wrist magic as the bat is captured in an usual position by the photographer — a brilliant click of a brilliant batsman essaying a brilliant stroke. A stroke of genius that has guided the ball the way the master intended to with subtle variations of wrist but with deadly effect. To someone who is not familiar with the game of cricket but not familiar with Tendulkar — not that there would too many in that category — would think the above photo is of a left-handed batsman perfectly poised to essay a sweep. The fact is Tendulkar bats, bowls and fields right-handed; what he does left-handed is to sign priceless autographs. Photographer Laurence Griffiths has yet again captured Tendulkar’s brilliance in split seconds — in the 2002 NatWest One-Day series at Chester Le Street, Durham — to capture the ball in the frame — the reverse sweep in all technical perfection. Quick thinking, quick reaction and brilliant execution.

There is a story that I have often heard in cricketing circles relating to Viv Richards. The story goes, apocryphal or otherwise is not unknown despite its popularity, that the audacious Richards was hitting balls outside the off-stump effortlessly to the mid-wicket fence than on through the offside. This was in his formative years.

This incensed his coach who admonishingly asked Richards: “Look where your foot is?”

To which, Richards replied: “But look where the ball is!”

You don’t talk conventional wisdom to geniuses like Richards, Tendulkar or Sobers, who used to acknowledge a good ball and then send it crashing to the boundary! They play the game on their terms, following the mindset of champions that’s beyond the comprehension of ordinary mortals. 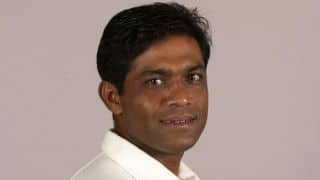 Rashid Latif: Defying gravity on the field; fighting controversy off it