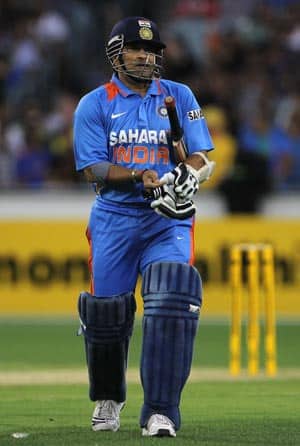 According to Simon Taufel, Sachin Tendulkar (above) has never crossed the line of dissent and is one who accepted umpire’s decision and got on with the game © Getty Images

Q: As an umpire, how did you view Sachin Tendulkar?

A: I have personally seen Sachin as a “normal” player with the exception of his fastidious concern about sightscreens, their height and width! Sachin does not seek extra attention or expect special treatment from me as an umpire. He has always been polite and approachable with me, and has been an easy player to work with.

Q: He was one of those who didn’t show emotions when given out. Not many walked immediately without looking back once the index finger went up, isn’t it?

A: Sachin very rarely has shown displeasure at being dismissed as he is an athlete that has managed to control his emotions on the sporting field. He has shown his disappointment on a few occasions that I can recall but he has not crossed the line of dissent and is one that accepts the umpire’s decision and gets on with the game — a leader in respect for the spirit of the game.

Q: Was it easier for you and your colleagues when Tendulkar was batting?

A: Generally, I feel that the umpires are aware of the publicity that Sachin creates when he bats, but it did not influence. The umpires do not want to give him out incorrectly. However, we are also conscious of having the responsibility to give him out when the evidence is there. For me, it was just another set of pads at the striker’s crease and the focus was on getting the decision right, no matter if it was Sachin or anyone else.

Q: What has been your best Tendulkar moment?

A: Being able to connect on a personal level — generally making himself available for a chat and sharing some common interests such as family and children.

Q: Which of his knocks in the matches you officiated did you enjoy the most and why?

A: The one that sticks most in my mind was when I was umpiring a Test in Hamilton back in 2009. I saw him get to 70 not out at the end of Day 2 and it was a very scratchy, unimpressive innings but he grafted through it and did not give up. Then he came out on Day Three and the following is a note from my diary: “We don’t know what Sachin had for breakfast today but he was a different batsman to that of yesterday — as he went on the attack hitting boundaries to all parts of Seddon Park from the middle of his bat. I couldn’t help but ask him why the transformation from yesterday and he told me that he was using a new bat on this tour for the first time — well, if that’s all it takes, give him a new bat all the time I say. Tendulkar went on to bring up is 42nd Test hundred — he finished with 160.” From this I would definitely say with Sachin that form is temporary but class is permanent.

Q: Anything else that you’d like to say on Tendulkar?

A: Firstly, I would like to congratulate him on his outstanding career and for being such a great servant of the game for India. In particular, I would like to wish him well for the future and hope that he finds an opportunity to apply his cricket and personal skills to the game going forward. We have been very fortunate to see a cricketer like him in our lifetime — the way that he carried himself on and off the field was remarkable given the pressure and expectation that millions of others placed on him. A champion player and a champion person.