With the rich and famous, icons and movie stars, blaring music and dancing girls hogging the scene, the IPL demonstrates the current and historical focus of cricket administrators of India. Arunabha Sengupta discusses how in such an environment favouring shorter and shorter versions of the game, Sachin Tendulkar’s monumental achievements in Test cricket appear even more colossal. 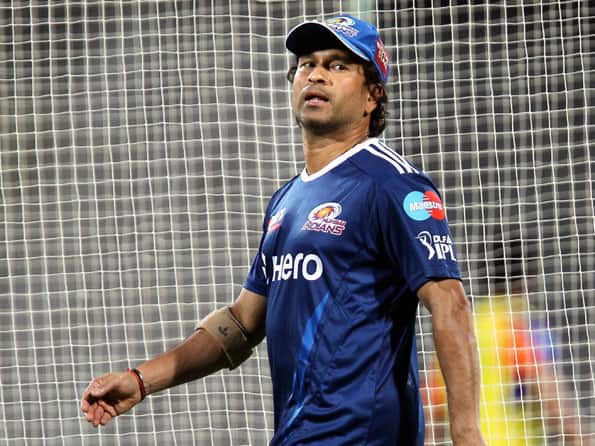 In the age of spoofed jingles, Sachin Tendulkar has continued to script scores of complete symphonies. In a game reduced to stand-up comedy shows, he has continued to strut on the stage enacting Homeric odysseys © PTI

With the rich and famous, icons and movie stars, blaring music and dancing girls hogging the scene, the IPL demonstrates the current and historical focus of cricket administrators of India. Arunabha Sengupta discusses how in such an environment favouring shorter and shorter versions of the game, Sachin Tendulkar’s monumental achievements in Test cricket appear even more colossal.

Cricket writer Mukul Kesavan recently observed with some bitterness and bite that the Indian Premier League (IPL) is of historical importance as the country’s first public celebration of decadence.

Harsh words, indeed. In a characteristically meticulous analysis, he highlighted disdain for procedures, murky franchise ownership, vulgar display of wealth, omnipresence of the filmi and business world, dumbing down real cricket and young women paid to tart up the tournament with their bodies as some of the evils which the tournament rejoices and revels in.

While there are plenty of advocates for this curious hybrid of cricket and entertainment, it is difficult to deny that the IPL is – if not divorced – at least distinct from the sport as we knew it. The gyrating hips-and-more of the hired cheerleaders are as much a part of the show as the cricketing action. Preity Zinta’s svelte form waving rhythmically to the blaring music and the worldly eyes of Subrata Roy and Vijay Mallya looking on with the raptness of seasoned speculators are as important aspects of the spread as Chris Gayle’s towering sixes and Sunil Narine’s tantalising spinners.

There is a definite Page 3 flavour to the extravaganza that unfolds in the middle. The focus is on the rich and famous providing a generous whiff of the good life with dancing girls in the background.

This was highlighted in crudest strokes at Eden Gardens, when a ground that has been habitually empty during the recent international matches filled up to the brim to witness a battle of egos – between an over the hill, unfit cricketing icon and a reigning Bollywood superstar.

To give credit where it is due, the Indian cricket administrators deserve applause, if not approval, for their vision. Kerry Packer had tried to lure crowds with spectacular cricket, arranging Super Tests with the best cricketers of the world in the fray. The IPL organisers never allowed themselves to be side-tracked by cricketing goals in a star crazy nation. Like celebrated archers, their eyes and cheque books remained focused on their target population, funding the garnish surrounding the bat and ball for maximum eyeballs to swallow the spectacle in greedy gulps. Never once did they allow the finer nuances of the sport to come between them and their business goals.

However, although the Lalit Modis of the world have set new benchmarks in the pandering of the noble game, the Indian cricket authorities have historically never quite allowed the romance of cricket to get in the way of their bank balances. A perusal of the country’s cricketing journey, scripted on ledger sheets by money-grabbing hands, brings to light the profound paradox of Sachin Tendulkar – how the greatest record holder in the longest version of the game managed to emerge from this environment.

The champion has had to play according the terms of a board used to hauling Test matches out of sight with money-picking pitchforks. His career has witnessed Test matches being hacked into pieces to make space for the One-Day Internationals (ODIs) and, during the last half-decade, IPL. And yet, he has managed to etch his name on to almost every major batting record that exists in Test cricket.

When the Indian team under Kapil Dev unexpectedly triumphed in the Prudential World Cup, 1983, the Board of Control for Cricket in India (BCCI) was quick to realise that the shorter version of the game had far more immediate earning potential than the Test matches of yore. The India-Pakistan ODIs in particular – whether held in the two countries, in the deserts of Middle East, or in the furthest corners of Singapore and Toronto – were so lucrative that the teams were made to face off again and again ad infinitum in a tedious temporal-economic loop.

The game soon became a virtual monopoly of the subcontinent, riding on the crest of tumultuous emotions of the volatile and voluminous fan following, fuelled by an unprecedented financial engine. And as a result, Test cricket did succumb to step-motherly treatment in this part of the world.

Before the International Cricket Council (ICC) became reasonably strict about the number of Tests, limited-overs matches were squeezed into every available nook and cranny of the Indian cricketing calendar with the odd five day affair thrown in almost as eyewash. Even now, the trend continues with dampened flagrance.

From 1989 to the summer of 1996, the first six and a half years of Tendulkar’s career, India played 39 Tests – the fewest along with Sri Lanka. During the same period, England took part in 67, Australia 66 and even New Zealand played 51.

Things improved post mid-90s, but only to a certain extent.

In the 23 years of Tendulkar’s career, India has played 205 Tests, while the tally for England and Australia are 260 and 250 respectively. In contrast, in the shorter version during the period, India leads by miles – with 628 ODIs while Australia ends up a poor second with 561.

While his nearest rival in accumulated Test runs, Ricky Ponting, has played in seven 5-Test and one 6-Test series in his 16 year career, Tendulkar has figured in just three 5 Test encounters in 23 years, the last of them as far back as 2002.

How the ODIs have affected the Indian calendar in recent times can be deciphered by contrasting Tendulkar’s journey with Sunil Gavaskar’s, a career that benefitted from eight 5-Test and six 6-Test series between 1971 and 1987.

Finally, when Misbah-ul-Haq’s ill-advised scoop ended in the hands of Shantakumaran Sreesanth, and a royal homecoming was arranged for the inaugural T20I World Cup champions, the phenomenon of IPL further exploded the equation.

Even now, when other boards have argued vehemently at the ICC for a World Test Championship, the BCCI has come across as a huge hindrance. The Indian board has little time for the five-day game, and sadly, time is vital for the format.

Not only has the public expectations tabooed a Tendulkar failure; available Test matches have often been so limited that a loss of form has never quite been an option. Longevity has come less as a glorious consequence of his career and more as a burning necessity.

Because, when the rest of the country was happy to applaud the ripples of muck stirred in muddy ponds of IPL, Tendulkar still nurtured dreams of crossing the mammoth oceans of 15,000 runs and 50 Test centuries. He wanted to reach the pinnacle of Everest and climb further while most were happy to reach as high as the lowest hanging fruit.

It is not the fastest bowlers and the scariest pitches of the world that has been the principal challenge in the master’s career. The biggest threat has been much closer to home, in the attitude of the administrators and the reaction of his countrymen, the twain that govern the structure of the game – so vividly chorused in every IPL encounter that is played out.