Sachin Tendulkar is not just another sportsperson. For Indians, he is God incarnate on earth. If cricket is a religion in India, then unquestionably Tendulkar is the God. Sudatta Mukherjee looks at the distinctive psychology of Tendulkar fans. A fan rushes onto the pitch to touch the feet of Sachin Tendulkar.

Sachin Tendulkar is not just another sportsperson. For Indians, he is God incarnate on earth. If cricket is a religion in India, then unquestionably Tendulkar is the God. Sudatta Mukherjee looks at the distinctive psychology of Tendulkar fans.

Who is a fan? Is he or she a logical follower of a person or an insanely blind worshipper? In Latin, fanaticus means “insanely but divinely inspired”. A good chunk of Sachin Tendulkar’s followers fit that description. Tendulkar is not just another Indian cricketer for them; he is a huge part of their daily lives.

There are two extremes to the Indian cricket fan — of late, Tendulkar fans in particular. Victories, centuries, records and milestones are joyous moments that alleviate the miseries of their mundane life. Team defeats and personal failures trigger irrational anger and mindless criticism, bordering on the insane. In moments like this, the fan suffers short-term amnesia, forgetting the joys that Tendulkar has brought them and the national over two decades of giving his blood, sweat, tears and personal sacrifices. It’s almost like saying, “Gods are not allowed to fail.” It does not matter to them that the man himself has repeatedly implored that he is not God, but just a mere mortal like any one of them.

In 1956, Donald Horton and Richard Wohl termed the relationship between a fan and the sportsperson as para-social relationship, where the fan goes intimate about his or her idol. Ask any kid playing the game in the country and they will probably say the same thing: Tendulkar is the reason why they took to playing cricket. Sachin Tendulkar was named after music maestro Sachin Dev Burman, but the Little Master himself has inspired lakhs of Indian parents naming their children Sachin. 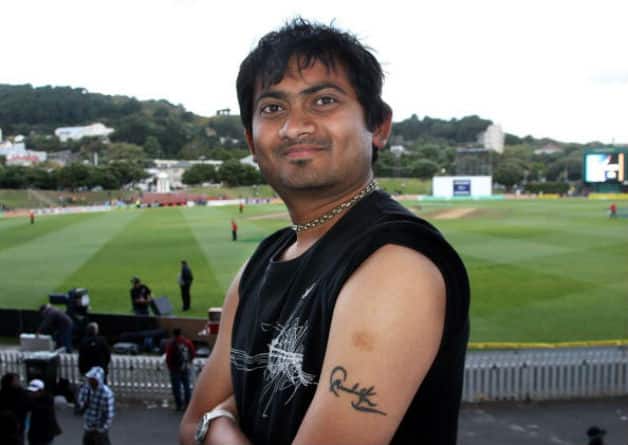 Some fans, like the one above, have tattooed Sachin Tendulkar’s name on their body, while most Indian cricket fans have tattooed the maestro’s name in their hearts © Getty Images

The nation has revelled in Tendulkar’s success — and that includes his own teammates. Virender Sehwag once said, “I am the superstitious kind. I never praise a shot because I fear the moment I do so, the batsman gets out. Till Sachin was on 190 in Gwalior, I was rooted in my seat in the dressing room. But when he got to 190, I couldn’t contain myself. I came out and started cheering every stroke till he got to 200.” Tendulkar is revered not just by his fans but also in his own team dressing room.

The maestro’s exit was on the cards. But when the dreaded moment arrived, there was a sense of numbness — which still persists. It’s almost like a death in the family. The funereal atmosphere is unmistakable.

Sachin Tendulkar retirement: How the Indian media reacted to the 'cricket quake’