Over the years, Sachin Tendulkar has played some monumental knocks of hypnotic beauty that have taken the breath away. Bharath Ramaraj looks back at one such memorable innings played by Tendulkar at Edgbaston in 1996. Over the years, Sachin Tendulkar has played some monumental knocks of hypnotic beauty that have taken the breath away. Bharath Ramaraj looks back at one such memorable innings played by Tendulkar at Edgbaston in 1996.
For 24 long years, India’s batting maestro Sachin Tendulkar constructed soul-lifting masterpieces of majestic brilliance. He touched fabulous peaks innumerable times with his timeless compositions full of breathtaking fluency and jaw-dropping perfection. At his peak, especially in the 1990s, Tendulkar was a batsman who seemed to bat in a dream-state. Actually, it is difficult for mere mortals like us to even imagine the way the willowy wizard with his brilliance destroyed stunned bowlers into submission, during that decade. One such knock from the exceptional genius came against England at Edgbaston in 1996.

It was an innings when his willowy wand was in full flow. With a volley of thunderous strokes and celestial creativity, he made the English attack look utterly clueless and left the stunned fielders in a state of trance.

Even though, wickets fell like a pack of cards at the other end, the power and aesthetic grace of Tendulkar was such that he kept threading the minutest of gaps. Actually, with a first innings deficit of 99 and India’s top-order batsmen yet again flopping miserably, the tourists looked dead and buried in the second essay of the Test match. India’s then captain, Mohammad Azharuddin was the worst culprit of the lot, as for an experienced batsman, he played like a novice by playing all-over a straight ball to see his leg-stump going for a walk in the park. Until India lost their captain Azharuddin, Tendulkar was slightly cautious and mainly played a few copybook on-drives. Chris Lewis had even produced a fine delivery that nipped away from Tendulkar, only for him to coax the ball late and fine, and guide it between slips and gully region for a boundary. Lewis also delivered a lifter at Tendulkar, but he expertly handled it with eagle-like-eyes to leave the snorter of a delivery.

It was only when the military medium-pacer Ronnie Irani came onto bowl that the volcanically talented batsman tore him apart with shots of surreal beauty. On that day, he was just toying with Irani’s bowling. When Irani bowled a back of a length delivery, it seemed like Tendulkar was waiting for an eternity for the ball to come to him. On expected lines, he essayed a cheeky short-arm pull for yet another sumptuous boundary. Irani though, inexplicably bowled a few more short deliveries to Tendulkar and he took full toll of it by depositing it to the boundary boards every single time. A few of the short-arm pulls Tendulkar played off Irani bordered on the outer-limits of sheer arrogance. 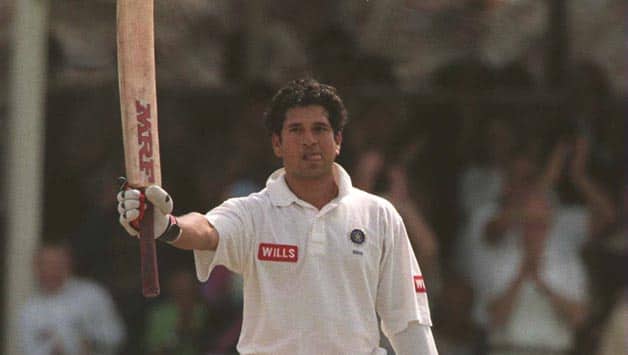 Sachin Tendulkar raises his bat after getting to his century at Edgbaston in 1996. Out of a team score of 219, Tendulkar scored 122 © Getty Images

If there was a contest to vote for the shot of the day at Edgbaston, then it was Tendulkar’s majestic cover-drive essayed off the hapless Irani. It was a stroke that elevated cricket fans to compelling peaks. In fact, one won’t mind capturing that silky smooth cover-drive in a huge photo frame, and put it at the entrance of a house.

In fact, England’s left-arm seamer Allan Mullaly was the only bowler who troubled Tendulkar a bit in the Test match. By bowling from over the wicket, he used back of a length deliveries and a few decent bouncers to keep the champion batsman guessing. Tendulkar though, gave an eloquent riposte to Mullaly’s tactics by playing some gorgeous pull shots. As runs flowed like a gigantic river from Tendulkar’s magic wand, in frustration, England’s captain Michael Atherton packed the off-side field yet, the batsman’s mesmerising magic meant that ball continued to scurry past bemused and motionless fielders to boundary boards.  He virtually reduced England’s field placements to a state of lottery.

If someone had given Tendulkar support at the other end, there was every chance that he could have won the game for India. Unfortunately for India, for most part of the 1990s, away from the subcontinent, it was all about snaring his wicket for the opposition ranks. A case in point being in India’s second innings at Edgbaston, as after his stunning knock of 122, the next highest score was by Sanjay Manjrekar and he made a mere 18 runs.

With India’s last-man Venkatesh Prasad for company, Tendulkar had no other choice, but to take risks with gambling instincts. Finally, in an attempt to play another pull shot, he lost his wicket to a fine delivery from Kent’s all-rounder Mark Ealham that got slightly big on him to catch the outside edge of the bat and for Graham Thorpe to complete a simple catch. It didn’t surprise anyone that India lost the Test match against England. Unfortunately for Tendulkar, it would go down into the history books, as another of those games that India was defeated when he made a sparkling century.

As Tendulkar walks into the sunset of his truly remarkable career with a trail of monumental innings bathed in radiant sunshine, one can only turn the clock back and marvel at the supreme level of batsmanship that day at Edgbaston. It was a day when Tendulkar, with a vivid brush, painted the entire ground with his magnificence.

Man of the Match: Nasser Hussain

World timeline in the Sachin Tendulkar Era — Part 1 of 2: The 20th century