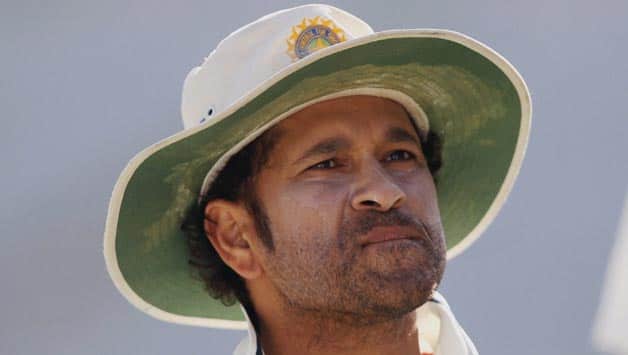 Are you surprised therefore that the Lahli Stadium emptied no sooner the master took just seven balls to be bowled by rookie Mohit Sharma on Sunday?

Lahli was all about being seen when Tendulkar was batting and very little to do with the game going on in Ranjitsinhji’s name. Yet, Tendulkar has had this tryst with marketing moolah.

So here he is, as this column is being written, in the fag end of “autumn,” refusing to get bowled in the second innings, unbeaten on 55, hoping to bat through Mumbai’s victory on Wednesday (October 30).

Euphoria is already being orchestrated by his social media minders, including whispers that he reconsiders his retirement.

Truth be told, whatever Tendulkar may or may not have done in the Ranji match, there are sharks in his team who are out to squeeze the lemon. They’re no different than his political gurus, who after securing him a Rajya Sabha seat and an out-of-turn house in Lutyens’ Delhi, have designs (in-my-humble-opinion, suicidal) to parade the man in Rahul Gandhi’s rallies!

This politico-marketing mafia doesn’t care how much pulp is left in the lemon, at least by Tendulkar’s own exalted standards. So they are pitching the forthcoming Test match series against the West Indies as a blockbuster for StarSports.

One can’t grudge the bonanza to Star India CEO Uday Shankar: he was prescient to have the rights to India playing at home. So if the Board of Control for Cricket in India (BCCI) and Tendulkar got together and cancelled an overseas tour just to create an unprecedented farewell series, Shankar can only be guilty laughing his way to the bank. (Star holds title sponsorship rights to the series. It is supposed to have acquired the rights at the base price set by the cricket board at Rs 2 crore per match. For the broadcast rights, it pays Rs 38 crore for a single match.)

If we believe estimates published by Business Standard, Shankar now stands to make for his bosses four to five times the ad revenue compared to a normal Test series. “From the early negotiations, it looks like advertisers won’t mind paying up to Rs 3 lakh for a 10-second slot on the match,” an unnamed media planner has estimated. Ad rates for the last match, to be held at the Wankhede stadium in Mumbai, are being pegged at Rs 3 lakh to Rs 3.5 lakh for 10 seconds, and those for the penultimate Test at Kolkata’s Eden Gardens at Rs 2.5 lakh to Rs 3 lakh.

In contrast, ad rates for a usual Test match at home languish at Rs 40,000 to Rs 60,000; the yield could be lower if the opponent was Zimbabwe or Bangladesh.

But here’s my early warning about diminishing returns: peddling Tendulkar against a tired West Indies is an insult and overkill. It caricatures the most enduring marketing machine of Indian sports.

What’s left is to tell the West Indians to bowl friendly stuff so that the ageing maestro lasts longer than he did since his last Test century two years ago.

So here’s what marketers could do beyond pumping endless ads of Tednulkar selling biscuits or cement: How about factoring upfront that the master may play, at best, one or two substantive innings out of the four on hand?

If that’s agreed, let’s have something innovative just so that the viewing public isn’t laughing at the advert (or cursing it, actually!) when the big man is trudging back to the dressing room?

One given would therefore be to shun mindless pumping of regular creatives. They will look indefensible between the 300-odd 10-second slots that go in a match, including breaks between the overs, drinks break and fall of wickets.

Does salvation then lie in new creatives?

Perhaps no, because Tendulkar surely won’t be caught giving shooting schedules in the run-up to his last two Tests.

So, what if the agencies haven’t sat and thought through this in advance?

Salvation, perhaps, lies in repurposing the creatives and meshing them with tasteful renditions of the aam admi. Remember Tendulkar masks in one particular commercial, now replicated in NaMo’s rallies?

Or how about bringing an entire town to a complete standstill?

I would even love a flash mob.

One final point: It’s time to get real; this iconic Indian brand is falling into a badly scripted retirement and he has no partners or talent to repurpose himself with the equivalent of Kaun Banega Crorepati (KBC) or Mohabbatein.

So rethink the overkill.