In the annals of sporting history, No 10 has been associated with some of the greatest legends — champions who defined barriers in their respective sport. Sachin Tendulkar has bid adieu to One-Day Internationals. It would be a fitting honour to the legend if his jersey No 10 is also retired © Getty Images

In the annals of sporting history, No 10 has been associated with some of the greatest legends — champions who defined barriers in their respective sport. Greats such as Diego Maradona and Pele have worn the No 10 jersey. To honour these once-in-a-generation players, their clubs have retired the No 10 jersey from their roster as an acknowledgement of their gratitude and to leave an unambiguous legacy.

Retired numbers are a common feature in football, ice-hockey, baseball and basketball. New York Cosmos retired the No 10 jersey in honour of Pele after his farewell game. Napoli retired the same after Maradona called it a day. These are the most prominent examples from the long list. However, it hasn’t been done at the highest level in football.

Prior to the 2002 FIFA World Cup, Argentina wanted to retire the No 10 jersey and submitted their squad to the governing body without a player allotted at that spot. FIFA’s rules stipulated that the 23-man squad must only bear the numbers from one to 23 and didn’t allow the move. Argentina, thus, had to allot a player that number and it has remained in their roster.

With Sachin Tendulkar calling it a day from One-Day International (ODI) cricket, there has been a clamour for retiring that number as a mark of respect for his humungous contributions to cricket.

The question is: Is it feasible in the game of cricket — where shirt numbers have been a fairly recent addition?

The whole “retire the No 10 jersey” campaign was started by the Mumbai Indians — the team Tendulkar represents in the Indian Premier League (IPL). In many ways, the said jersey has belonged to Tendulkar as he has worn it for years and has scripted a number of memorable knocks. The general public in India may not remember the numbers of the other players, but No 10 is one you would automatically associate with the Little Master.

Jersey numbers were introduced in cricket only in 1995-96 during a World Series tournament in Australia. Till then, ODIs were played in both the whites as well as coloured clothing. Thus, the numbers emerged as a novel phenomenon in cricket as it was only seen in other sports such as football, hockey etc. — sports where the numbers would often indicate the position the particular player took on the field of play.

In cricket, players are normally free to choose their own jersey number with a few of them consulting numerologists to pick one. The Indian players in particular have been advised on many occasions to change their numbers if they run into poor form. Tendulkar himself has used other numbers such as 33 and 99, but he has predominantly worn No 10. 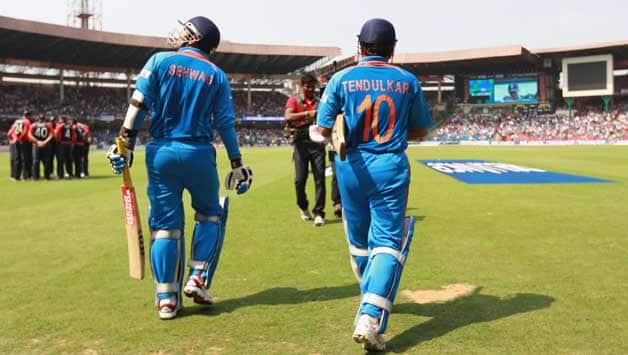 Virender Sehwag did not even want a number on his jersey and the authorities had not problems with that. But, Tendulkar has made No 10 his own © Getty Images

With there being no specific allotment criteria in cricket, there doesn’t seem to be any problem in retiring Tendulkar’s jersey number at the highest level. Unlike international football, there isn’t a hard and fast rule and isn’t adhered to strictly. Virender Sehwag did not even want a number on his jersey and the authorities had not problems with that. But, Tendulkar has made No 10 his own and considering the kind of service he has given India, it would be a fitting honour. He could aptly become the first man in the history of the game to be accorded such a tribute.

However, Tendulkar himself might want a promising youngster to don the jersey in the future. Since the number has been graced by some of the greatest across all sports, there is also a case for giving it to the best player of the side. It’s a coveted number and could serve as a huge motivation for a youngster to aim for that jersey.

Mumbai Indians, however, can retire the jersey once Tendulkar calls it a day from the IPL. Pele and Maradona’s clubs don’t use their numbers, though their respective nations — Brazil and Argentina — have fielded a few remarkable players with that jersey in the years that followed.

The whole idea surrounding retiring a number rests on the massive following the club enjoys and the fans love for a player. Team India obviously has a much bigger fan base than Mumbai’s. Their enthusiastic supporters would see a more emotional value to the number being retired from the Indian roster rather than that of Mumbai Indians.

No 10 is also associated with perfection, as famously exemplified by the gymnast Nadia Comneci at the Montreal Olympics. It would be fitting if No 10 jersey in ODI is bid farewell in honour of a legend who towered over his rivals.

Pakistan fan from Chicago struggles his way into Chinnaswamy stadium