Sachin Tendulkar helped Mumbai pull off yet another victory in the Ranji Trophy against Haryana at Lahlli in the 2013-14 season. Abhishek Mukherjee looks at the insatiable hunger of the great man and tries to find a reason behind it. 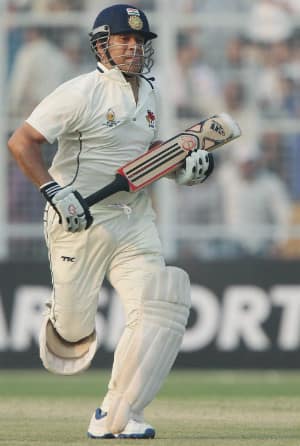 Sachin Tendulkar helped Mumbai pull off yet another victory in the Ranji Trophy against Haryana at Lahlli in the 2013-14 season. Abhishek Mukherjee looks at the insatiable hunger of the great man and tries to find a reason behind it.

We get tired with our professions, don’t we?

There is almost nothing that Sachin Tendulkar has not achieved in the world of cricket. He has seen the best of it; he has borne the burden of a billion over a quarter of a century; he has seen the Berlin wall fall and South Sudan being formed, the arrival of Roger Federer, the rise and fall of Lance Armstrong, the arrival and domination of cable television and the internet in India, and Amitabh Bachchan taking a hiatus, getting almost bankrupt before regaining it again.

In other words, he had seen it all.

What motivated him, then, to go out to play cricket in Lahli (a place that I had to look up on Wikipedia about a week back), several kilometres away from Rohtak, which is a small town anyway? Was it the drive to win a match for his beloved Mumbai? No, he has done that plenty of times before; and this was not even a knock-out match. Was it about getting practice before his last Test series? He could have done that without travelling, could he not?

Even if he did turn up, could he not have gone all guns blazing against the trio of Mohit Sharma, Joginder Sharma, and Harshal Patel? Why did he need to be cautious? What does it mean to him, one wonders. He could have lit up the small stadium consisting of an enthusiastic crowd with a flurry of strokes before throwing it away. The people would have returned home happily, telling their grandsons years later that they had seen Tendulkar at his best in his last Ranji Trophy match.

He chose not to do that.

Even after all these years of First-Class cricket Tendulkar retains that insatiable hunger; he would rather be dominated by the Haryana bowlers with limited international experience; if the conditions were difficult he would give them that respect and scrape for runs rather than dominate and give it all away; after all, as Allan Border had said, it’s how much, and not how, that matters.

But this wasn’t even about the critics. He had, as he himself has said once, always been converting the stones thrown at him and converting them to milestones. This was about winning battles irrespective of the stature of the match. It did not matter whether it was the World Cup final or a Ranji Trophy opening match at Lahli. The intensity was the same. So was the hunger: the insatiable appetite to win, to perform, to dominate encounters.

Even after all these years he refuses to give up. His body has, after taking toils of numerous days of cricket, thanks to BCCI’s unashamed hunger for money which extracted the most out of him in the 1990s through a chain of meaningless ODI tournaments. His reflexes may have been on the wane but the mind is still there. It refuses to give up.

Time did not matter today. In fact, the longer it lasted, the more we got to see of the man, curbing his instincts and playing for his team. Who cared whether he was crawling or sprinting to a finish?

But then, again, the two square-cuts off Patel and that gorgeous extra-cover drive off Ashish Hooda — what would the world do without them?

What would the world do without him anyway?