Sachin Tendulkar unified a diverse realm of people in India

Sachin Tendulkar unified a diverse realm of people in India

Sachin Tendulkar is one batsman who has left bowlers from around the globe thinking. Murali Kartik, the India left-arm spinner, presents a bowler’s perspective on the maestro and talks about what the great man has done to unify the people of India. 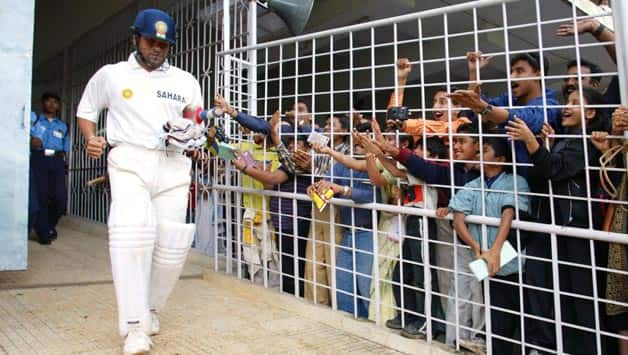 Sachin Tendulkar… the heartbeat of the nation © Getty Images

Sachin Tendulkar is one batsman who has left bowlers from around the globe thinking. Murali Kartik, the India left-arm spinner, presents a bowler’s perspective on the maestro and talks about what the great man has done to unify the people of India.

I first bowled to Sachin Tendulkar, when I was about 17 years old, at the National Stadium in Delhi. One could see the difference in him as he picked things up very quickly. In all the years I have played with and against him, he has always picked anything a bowler would try. If you bowled to him at the nets and tried something different, he would ask you, “Can you do it again?” What that shows is that his eye was different and he could adjust to any delivery. Apart from that, he also had numerous shots to the same delivery and I could see that when I bowled to him during his golden period in 1998-99.

Sachin also had this ability of changing his trigger movements. Every batsman has a trigger movement before executing a shot. It is a natural part of your cricket, but depending on the conditions and the bowler, Sachin could change it with ease. He would assess the situation and then tune that movement accordingly. To do that, it may take him a session. For the others, it may take a year to rehearse and change it. That is special ability!

Andrew Flintoff once said, “When you bowl at him (Sachin) you are not just trying to get him out, you are trying to impress him.” How true is that! Whenever you bowl to him, you are up against the very best. It is not the number of times you get him out, but how he rates you that matters. He may rate you highly, but you may not dismiss him too many times. I think getting that compliment and respect from him is what a bowler looks for. That in itself is more important that the number of times you get him out.

In the year 2000, I made my Test debut under Sachin’s captaincy and I received my Test cap from him. You walk into the dressing room with the likes of Sachin, Anil Kumble, Javagal Srinath and Rahul Dravid, you may feel a little unnerved. While giving me the cap, Sachin told me, “Best of luck! Remember, it is just another game.” That did well to put me at ease for my maiden Test. We were batting first and I put on a 52-run stand with Ajit Agarkar for the last wicket. I had actually walked in when Jacques Kallis was on a hat-trick.

Then, I remember batting with him during Bangladesh’s inaugural Test at Dhaka in 2000. I had gone in as a night-watchman, the result of which was that Rahul was at four and Sachin had come in at number five. He kept telling me that you should have a blank mind and play each ball on its merit. That helped me clear my mind and once you reach that stage, you react to the ball without any inhibitions. In the end, I scored 43. Funnily, my average against Bangladesh was better than Sachin’s until India toured the next time.

There are many memories that stand out, but from a personal point of view, I would pick the brilliant catch he took off my bowling against Pakistan in a One-Day International (ODI) 2004. Inzamam-ul-Haq charged at me and the ball was sailing towards the ropes at long-on. Sachin ran across, put his arm up and took a magnificent catch to dismiss Inzamam. Apart from that, I can talk about the 241 not out at Sydney and the 97 he scored on my Test debut in Mumbai. The ball was seaming around that day at the Wankhede Stadium, but Sachin looked in complete control.

Off the field, you see a very different side to him. He isn’t a prankster, but has a funny element. He is a normal guy with his own sense of humour. Many times, five or six of us would meet up after a game and gather in Sachin’s room. Those were good moments and I will cherish them.

Sachin’s work ethic is exemplary. If he does well or not, it doesn’t matter as his intensity is the same. His legacy is unparalleled and unmatched. For many years, he shouldered the burden of the Indian batting order. What stood out is his tenacity and longevity. Through such a long journey, there may have been a few ups and downs, but through all that he has been consistent. People may have questioned him off late, but he would still perform better than others. What can one actually say about his legacy! He will be known even in non-cricketing nations.

For India, Sachin has been a unifying factor that has brought together a realm of diverse people. It is said that there is “unity in diversity” in India and Sachin is one symbol of that. Whether you were a Hindu, Muslim or a Christian, you prayed for his success. That is what Sachin has been for this country.

To go with the amazing longevity is his humility. It is a rare quality for somebody who has achieved so much. That is what stands out for me. I cannot think of a more respected person in cricket and what he stands for is special. I have seen players from other teams coming to him and getting their jerseys signed with the words, “Sachin, the man we want to be!” And that came from the likes of Adam Gilchrist and Andrew Symonds. He has indeed done things people cannot even dream of doing.

The world would be a sadder place without him batting for India. Lots of greats have retired, but this is different. He has given us pleasure and joy for almost 24 years now. As I said earlier, he also unified us in India. He doesn’t have to prove anything to anyone. However, a double hundred in his 200th Test would be the icing on the cake for this glorious career.

(Murali Kartik played eight Tests and 37 One-Day Internationals (ODIs). One of the best left-arm spinners on the circuit, Kartik has been a success in county cricket for Middlesex, Lancashire, Somerset and Surrey)

Sachin Tendulkar is the most complete batsman that I have seen: Michael Clarke