Tarot reader Shruti Chopra looks into her cards to give CricketCountry.com readers exclusive insights into what lies ahead in the IPL matches. In the below piece, she dwells into the Delhi Daredevils vs Mumbai Indians game - the only IPL match on Friday. 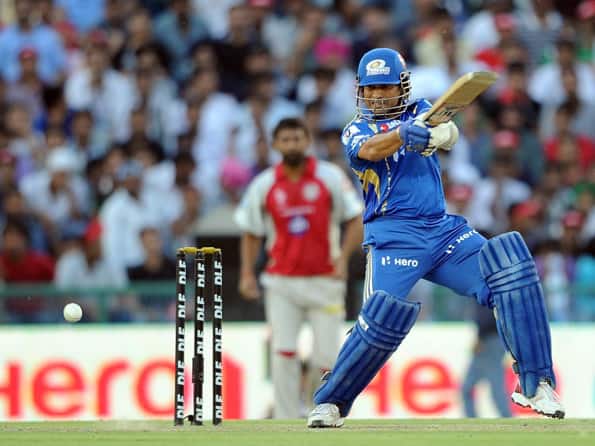 Sachin Tendulkar is being represented as the Queen of Swords, which shows him as a firm figure of authority in Friday’s tie against the Delhi Daredevils © AFP

Tarot reader Shruti Chopra looks into her cards to give CricketCountry.com readers exclusive insights into what lies ahead in the IPL matches. In the below piece, she dwells into the Delhi Daredevils vs Mumbai Indians game – the only IPL match on Friday.

Delhi carry the danger of coming into this game a bit too confident. They have the Four of Wands and the Judgment card explaining that the Daredevils believe it’s their time now to improve the level of cricket they have been playing. They need to be a little careful of trying to be over aggressive with their plans, as they may be humbled by the opposition. Carrying too many ideas may hamper their direction. They will need to focus more on their fielding and bowling.

Virender Sehwag will have a good start with the bat, but the Fool and Page of Cups warns that he may not remain focused and will lose his way. In his captaincy, he will feel the pressure of expectation. The Six of Cups guides that he must stick with past formulas that have worked for him, rather than trying too many new ideas.

Mahela Jayawardene has too many Cup cards – meaning he will be too soft in his approach. The Two of Cups does suggest that he will be part of a good partnership and will be given an opportunity to take off more aggressively, which he will find tough to do.

Kevin Pietersen will play a very balanced game. He will plan out his innings well, but should be warned of not leaving his attack too late.

Ross Taylor will have a day of hard work. The Eight of Pentacles explain that rewards won’t come so easily today, but he will be determined to put in the work required.

Shahbaz Nadeem will have a good start and will be able to steer some direction to the Delhi bowling attack.

Morne Morkel will be balanced, aggressive but with the Tower card coming up, he won’t be able to maintain his balanced bowling performance.

Irfan Pathan will be well planned, and will bowl well in partnership. In fact, his batting is looking strong today.

Umesh Yadav is a little confused, like the Seven of Cups. He will receive some crucial direction from his team, which will bring him good results.

The Mumbai team should be wary of working on unrealistic plans to defeat the opposition. They should steer clear of too many ideas, which will confuse themselves further. The Three of Pentacles explains their heavy reliance on individual performances, and in fact that’s what should see them putting up a good fight against the Delhi Daredevils. They will have a good all round performance, but will need to be more careful with their batting.

Harbhajan Singh will, like the Two of Wands, be able to make active changes to achieve better results with his bowling. He has the ability to change things for himself as he is well supported by the Star. In his captaincy, he will need to bring more responsibility by channelising his aggression better. He will show improved authority and bring about important changes. He needs to refrain from spurts of impulsiveness.

Sachin Tendulkar will be well planned and ready to execute his ideas. His patience will be the key, especially since he is being represented as the Queen of Swords, which shows him as a firm figure of authority – that’s what will get him the results today.

James Franklin has the World and Knight of Pentacles gracing him with a mature innings that will be able to change the tide for the team.

Munaf Patel will have to deal with some initial problems, but with the Knight of Wands, he will take this in his stride and will get some favourable results.

Rohit Sharma will be blessed with run-making opportunities. A good day with the bat, but with the Ten of Swords pulling him down, he will need to be cautious with trying to be over-aggressive.

Ambati Rayudu has a good start to look forward to, but he won’t be able to keep pace with this and may not be able to enforce the final push required.

Robin Peterson will be aggressive in implementing his ideas. In fact, he will have too many ideas floating around. Overall, a good day for him.

There isn’t much difference between them as they carry some minor weaknesses in their cards. Mumbai Indians will carry more balance than the Delhi Daredevils in their bowling and that will be the difference. It’s advantage Mumbai Indians.

Will Sachin find time to devote to debates, deliberations & drudgery of Rajya Sabha?