A talented leg-spinner, Sadu Shinde was born August 18, 1923. Abhishek Mukherjee looks at the man who could never make it big at the top level, but made his way to the annals of Indian cricket in a completely different way.

Had Subhash Gupte not arrived at the fray to join Vinoo Mankad and Ghulam Ahmed, Sadashiv Ganpatrao “Sadu” Shinde would probably have had a longer Test career. Instead, the 5’ 8½”, “frail and willowy” leg-spinner had to remain content with seven Tests, and was rightfully dropped for good.

Shinde had a good leg-spin, but his strength lay in his two googlies. Apart from the conventional one, there was another — described beautifully by Sujit Mukherjee in Playing for India: “Coming after the orthodox wrist-crooked wrong-’un, this delivery invariably sprang a nasty surprise. Ripped off the top of the third finger, it hastened unexpectedly off the pitch. Its tendency to pitch short nullified its efficacy as secret weapon but was practically unplayable when properly pitched.”

Playing for three Ranji Trophy teams (Maharashtra, Baroda, and Bombay) Shinde turned out for 79 First-Class matches. They fetched him 230 wickets at 32.59 with 12 five-fors; never a good batsman, he scored 871 runs at 14.04. His Test numbers, 12 wickets at 59.75, were rather pedestrian.

A building contractor’s son, Shinde was born in Bombay and made his First-Class debut for Maharashtra against Baroda just after World War II took off. He had a forgettable first innings, but came back with the wickets of Shankarrao Powar and Hemu Adhikari in the second.

Shinde’s stature as a bowler grew under the tutelage of DB Deodhar. His first significant performance came against Bombay at Brabourne Stadium: as Vijay Merchant scored a humongous 359 not out and Bombay amassed 735, Shinde toiled on for 75.5 overs, finishing with 5 for 186. Handling Nawanagar at Poona was a cakewalk after that: while Deodhar scored 2 hundreds in the match, Shinde routed the tourists with 5 for 17 and 4 for 29. It would remain his best match haul.

The Zonal Quadrangular Final (later Duleep Trophy) of 1945-46 had to be called off after Day One due to riots in Bombay, but there was enough time for Shinde to finish with 6 for 93 (including Abdul Hafeez Kardar, Lala Amarnath, and Gogumal Kishenchand) against North Zone. Having scored 49 and returned a match haul of 7 for 84 in the Bombay Pentangular Final, he found a spot in the 1946 tour of England.

Shinde had an excellent start to the tour with 5 for 50 against Worcestershire at New Road in his first match. He did well in the University matches as well, and made his debut in the first Test at Lord’s along with a few all-time greats: barring Gul Mohammad the Test also saw Kardar, Mankad, Vijay Hazare, and Rusi Modi making their Test debuts, while England had three debutants in Frank Smailes, Jack Ikin, and Alec Bedser.

Shinde did a decent job while batting, scoring only ten but helping Modi add 43 for the last wicket. He had Ikin caught-behind, but that remained his only success of the Test. England won by ten wickets, and Shinde did not play another Test on the tour. He finished the tour with 39 wickets at 30.10.

Shinde had an ordinary home season (though he had some fun, scoring 50 not out — his only First-Class fifty — as he and Modi added 101 for the ninth wicket at Kotla. He did not make it to the Australia tour of 1947-48, and moved to Baroda shortly afterwards.

Following his 5 for 79 and 4 for 81 against East Zone in the Zonal Quadrangular Tournament final of 1948-49 at Brabourne he found a spot in the second Test against West Indies at the same ground. It was yet another disappointment from Shinde as he was clobbered and went wicketless. West Indies batted only once in the Test, and Shinde was dropped again.

Shinde made a move to Bombay in 1950-51, and found instant success. Bombay were thrashed by an innings by Gujarat at Ahmedabad, but Shinde sent down 55.5 overs in Gujarat’s only innings and finished with a career-best 8 for 162. Once again he got the nod — this time for the first Test against England at Kotla.

Dattu Phadkar gave India an early blow, but when Jack Robertson and Don Kenyon took the score to 79 for 1, England seemed to be out of danger. This was when Shinde intervened: two googlies resulted in the wickets of Kenyon and Robertson in quick succession.

It was an excellent spell. Wisden wrote: “The batsmen failed lamentably against the splendid leg-break bowling of Shinde. For a bowler of his type, he sent down surprisingly few loose balls, while his flight and spin kept everyone struggling. He used the googly freely, sometimes two or three times an over, and yet his amazing accuracy never deserted him.”

Shinde finished with a career-best 6 for 91. With Mankad also taking three wickets, England were bowled out for 203, and hundreds from Merchant (in his last Test) and Hazare helped India secure a 215-run lead. England were down at 116 for 3 when Donald Carr joined Alan Watkins.

Datta Gaekwad, substituting for Merchant, had earlier missed Robertson off Shinde, but it had not turned out to be too costly. The expensive drop came when he grassed an easy chance off Carr at deep square-leg off Shinde when he was 28; he scored 76, Watkins got a hundred, and England saved the Test.

Shinde also played at Brabourne and Green Park in that series (he picked up a wicket in each of the Tests), but was left out at Eden Gardens (the Test that marked Gupte’s debut) and Chepauk, thus missing out on India’s maiden Test victory. Despite his failure in the two Tests he was selected for India’s forgettable 1952 tour of England.

Shinde had a torrid time at Headingley (the Test of India’s four for nought fame), though he clean bowled Peter May. He also played at Lord’s (Mankad’s Test), but had to be taken away after a clobbering of 6-0-43-0. He never played another Test. He finished with the rather unusual record of having an average (14.16 from 11 innings) more than the highest score (14) among batsmen with 10 or more innings.

It was a disappointing tour for both the Indians and Shinde. He managed 39 wickets on the tour at 35.15, his only performances of note being 4 for 57 against Glamorgan at Cardiff and 5 for 107 against Nottinghamshire at Trent Bridge.

Shinde showed signs of return to form in 1953-54 when he returned snared 13 wickets from two consecutive matches in 1953-54. He played a solitary match the following season against Baroda, but without much impact: Bombay had been knocked out after a solitary match, but there was still hope.

A Bachelor of Arts, Shinde had taken up a job as a Clerk at Bombay Sachivalaya during his playing days. Shinde’s daughter Pratibha went on to marry Sharad Pawar, currently the President of Nationalist Congress Party. Pawar has been the Chief Minister of Maharashtra on three occasions as well as the President of BCCI and ICC. 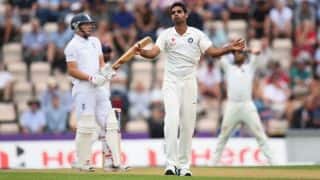